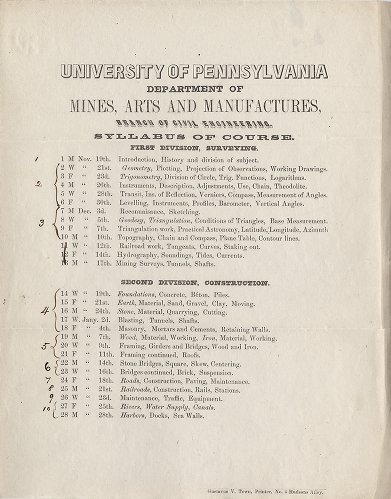 As part of a restructuring of its undergraduate education, the University of Pennsylvania established the Department of Mines, Arts, and Manufactures in 1852, though courses were not offered until the 1855-56 school year. While the Department’s existence was brief, Penn’s Scientific School and its descendents rose from the remnants of the Department of Mines. Behind these institutional changes lay a broader change in what Christopher Jones, in his University of Pennsylvania doctoral dissertation, calls the “energy landscape” of eastern Pennsylvania. This energy landscape, according to Jones, consists of the energy source and everything with which it comes into contact on its journey to the consumer, including mining, transportation, and consumption technologies and the people who use these technologies. But an energy landscape, or any landscape defined by technologies for that matter, also includes the knowledge economy that evolves to support technological progress. Penn’s Department of Mines, while short-lived compared to other contemporary engineering schools, was an integral part of the changing energy landscape of nineteenth century Pennsylvania.1

1. A scientific course, emphasizing natural philosophy and leading to a Bachelor of Science degree, was also established alongside the classical Bachelor of Arts education in the College ; Jones, Christopher, “Energy Landscapes: Coal Canals, Oil Pipelines, Electricity Transmission Wires in the Mid-Atlantic, 1820-1930” (Ph.D diss., University of Pennsylvania, 2009), 8.
Return to top
The Energy Landscape of Eastern Pennsylvania »
X