The sport of rowing began at the University of Pennsylvania in 1854 with the founding of the University Barge Club. This initiative was taken by students, specifically ten members of the freshman class: George H. Waring, John W. Williams, J. Ashurst Bowie, J. Beauclerc Newman, Horace G. Browne, James H. Peabody, Alexander B. Coxe, Edmund A. Robinson, Pemberton S. Hutchinson, and Chas. I. Macouen.

These young men, like many Penn students at the time, were in the habit of frequenting Tom Barrett’s Gymnasium after classes were done for the day. Here on the upper floors of a building near 8th and Market Streets they learned sparring and fencing. The sport of rowing was becoming increasingly popular in Philadelphia, so when the weather turned warm, these freshmen went out to Charlie’s boathouse on the Schuylkill River near the Fairmount Waterworks; before too long they purchased a “barge,” a boat named the “Hesperus,” from the Bachelor’s Barge Club for one hundred dollars and formed the University Barge Club.

In these early days, club members wore uniforms and participated in drills. The daily drills included tossing and storing the oars, handling the boat hooks and lines, practicing pushing away from and landing at the boat slip. The required sailor’s uniform consisted of a white shirt cut low at the neck with a wide, turned-down collar, bell-bottomed white duck pants, a pea jacket with brass buttons, a wide belt, and a straw hat trimmed with long ribbons. All was purchased from clothier Jacob Reed; both the hat and the belt were monogramed with “U.B.C.”

University Barge Club, 1867 Record
The club’s rowing activities included competitive racing, regattas and also pleasure trips to various destinations on the Delaware and Schulykill Rivers. The University Barge Club was not listed as a student organization in the first yearbooks of 1863 and 1865, but in 1867 the yearbook mentions that the University Barge Club had won the championship flag of the Schuylkill Navy after a lull in competitions while many rowers were involved in the Civil War. According to the 1867 yearbook, the University Barge Club at that time rented part of the Philadelphia Skating Club house where it kept its two boats, the four-oared shell Hesperus and the six-oared outrigger barge Lucifer. It was common for club members to launch their boats here and then travel to their upriver house, “The Lilacs.”

The University boasts of two boat clubs, viz. the University Barge Club, one of the most flourishing clubs on the river, composed chiefly of graduates; and the College Barge Club [College Boat Club], a young, energetic organization, engaged at present in putting up a boat house at Fairmount Park. 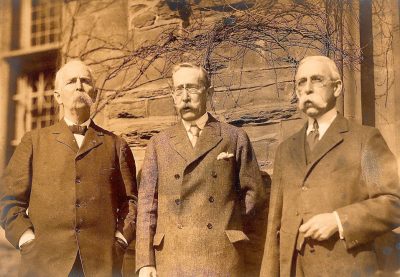 For a time undergraduates were found in both clubs, but the University Barge Club catered more to alumni and others, while the College Boat Club focused more on training class crews for student competitions at both the intramural and intercollegiate levels.

The University Barge Club still exists today on Boathouse Row in Philadelphia. However, the connection with Penn no longer exists. Instead this boathouse now provides accomodations for the rowing programs of Chestnut Hill Academy and Springside School. It also hosts the Thomas Eakins Head of the Schuylkill Regatta in October of each year.