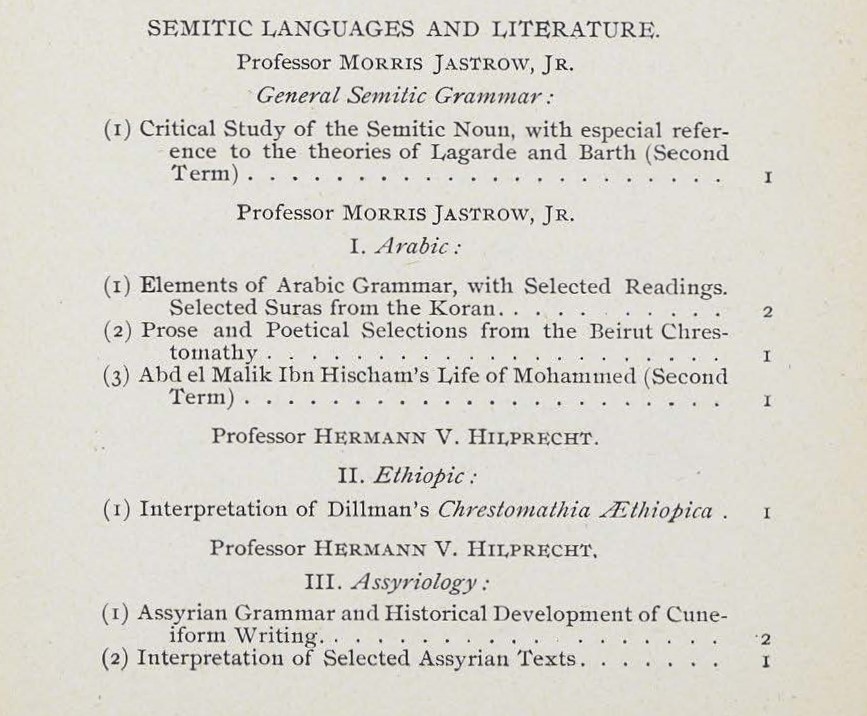 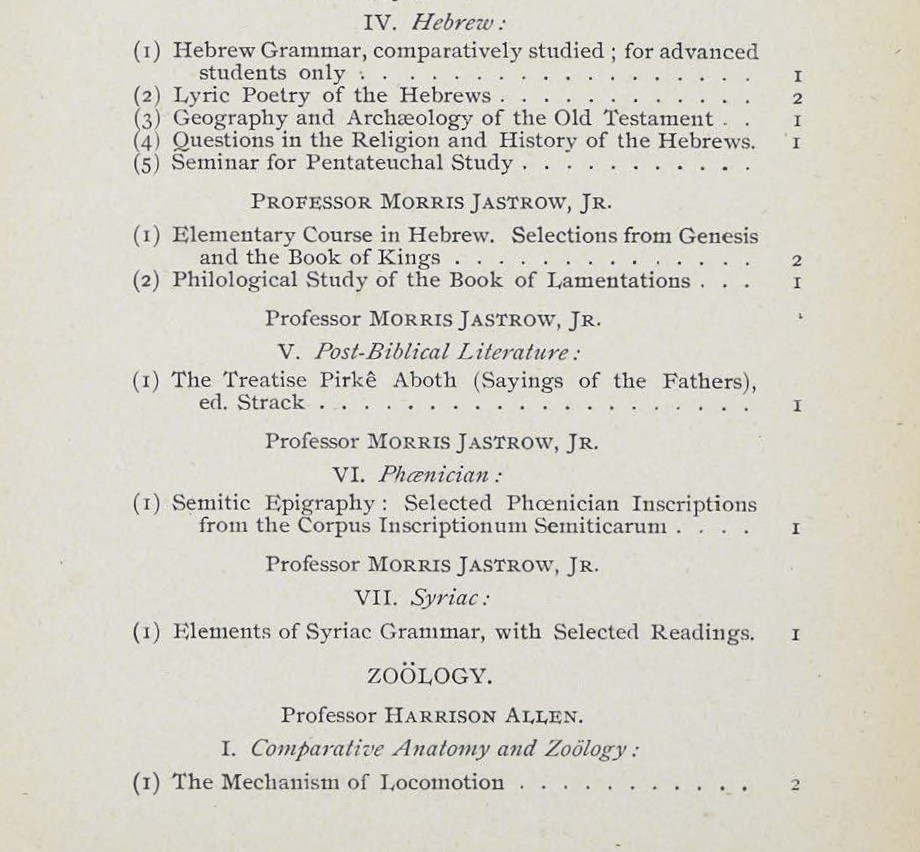 The history of the teaching of Arabic at the University of Pennsylvania is tied to the history of program of Semitic Languages in the Department of Philosophy (after 1906 called the Graduate School) and the career of Morris Jastrow (1861–1921). The Semitic Languages program was established in 1886. The suggestion of establishing “one or more professorships in Semitic languages” was brought before the University’s Board of Trustees and referred it to a committee on 6 July 1886. At the next meeting, on 7 September, “The Committee on the Department of Arts reported on the question of Professorships in the Semitic Languages, and at its request the whole question, together with a memoir on the Department of Philosophy presented by Dr. M. Jastrow, Jr. was referred to the Joint Committee on the Arts and on Science, with request for speedy consideration and action.” The Trustees agreed to the Committee’s recommendation and created a Chair of the Hebrew Language in the College Department (i.e. College of Arts and Sciences) and nominated Rev. John P. Peters (who was a teaching Hebrew at the Philadelphia Divinity School in West Philadelphia) to the post. Peters’ appointment was passed at the next Trustees’ meeting on 5 October. At that same meeting the Trustees created two additional chairs in the Semitic Language and nominated Morris Jastrow and Herman V. Hilprecht (1859–1925) for the positions which they planned to vote on at their November meeting. Hilprecht was given the title of Lecturer on Egyptology and Jastrow Lecturer on Arabic and Assyrian. Both appointments for were for one year but they did not last that long. The Department’s 1887 catalogue defined Semitic Languages as “Hebrew — Classical and Rabbinical, Aramæan, Assyrian and Babylonian (Sumerian and Akkadian), Ethiopic, Arabic, Other dialects like Phenician and Himajaritic known only from a few inscriptions.” 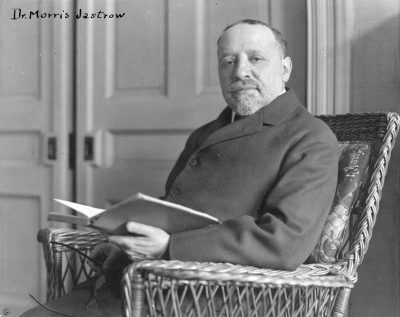 Jastrow, who clearly had some influence in this process, did not care for the parsing of the disciplines created by the Trustees’ appointments. He suggested to Provost Pepper that there should be a Chair of Assyriology and a Chair of Arabic and Rabbinical Literature, either of which he would be glad to be appointed to. Following through on Jastrow’s suggestion, the Trustees’ appointed Hilprecht as a Professor of Assyrian in the Dept. of Philosophy (without salary) at its 7 December meeting and Jastrow as Professor of Arabic and Rabbinical Literature at its 4 January 1887 meeting. During these same months the Trustee’s also appointed Daniel G. Brinton to be the first Professor of Archaeology and American Languages. Jastrow’s title was shorted to Professor of Arabic in 1890 when he was appointed Assistant Librarian of the University. 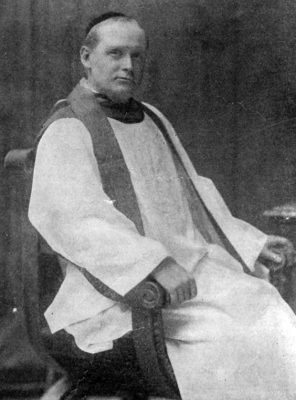 Though the official entrance of Arabic into Penn’s curriculum was in 1887, it is likely that lectures on Arabic may have been given a year before. In the fall of 1885, Morris Jastrow returned to Philadelphia after spending four years studying in Europe and acquiring his PhD from the University of Leipzig. Though the Philadelphia Inquirer reported in July 1885 that Jastrow was “preparing himself rigidly for admission into the Jewish pulpit,” it was clear he was more interested in an academic career. 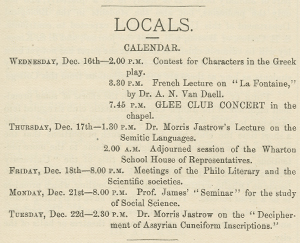 By September 1885, the Inquirer proclaimed that Jastrow had “been selected to fill an important position, namely, that of instructor in the department of languages in the University of Pennsylvania.” His appointment as an instructor, not a lecturer, was informal and not presented to the Trustees. He did, however, begin giving lectures at Penn in the fall of 1885, as part of a program at that time of having visiting professors give public lectures. The University Magazine reported on 20 October 1885 that “Dr. Morris Jastrow, lately appointed Lecturer on the Semitic Languages at the University, will open courses on Hebrew, Arabic, and Assyrian, at the University, on Monday, Nov. 2nd . . . .” The Inquirer reported on 3 November 1885 that among the topics to be covered in Jastrow’s lectures were “courses in Hebrew and Arabic . . . arranged for beginners, who wish to acquire a knowledge of these languages.”

Whether Jastrow actually taught Arabic in these lectures (which Penn students could and did attend), is not certain. The following outline lists the subject matter covered based on what appeared in the Pennsylvanian (which did not begin publishing until December 1885):

Once the Semitic Languages program got going there was clearly interest in it. The faculty of the College allowed undergraduates to take Hebrews classes in their senior year beginning in the fall of 1886. There was also an interest in learning in Arabic because the 1887-88 University catalog lists two students in the course of study in Arabic in the Dept. of Philosophy/Graduate School. One of these students was James Alan Montgomery who is the first person listed in the Graduate School’s matriculation register with “Semitic Languages” as his major in October 1887. The first person listed as having Arabic as minor is Ernest Theodore Kretschmann, who matriculated in June 1889 (and was the Pastor of Augustus Lutheran Church at Trappe, Pennsylvania, Henry Melchior Mühlenberg’s church). There was a sizable number of “Special Students” in the Graduate School who took Arabic from 1888 onwards. The first ones listed in 1888-89 as taking just Arabic classes were: Dr. Marcus Mordecai Jastrow (Morris’ father and Rabbi at Rodelph Shalom), Edwin Francis Keever (Lutheran clergyman), and Robert U. Rogers (from Haverford College).

The requirements for majoring in Semitic Languages in 1887 included Arabic as an additional language requirement for almost all students in the program. The outline of Arabic courses offered from the beginning up to 1900, are as follows:

The instructor for all of these classes was Morris Jastrow, Jr.