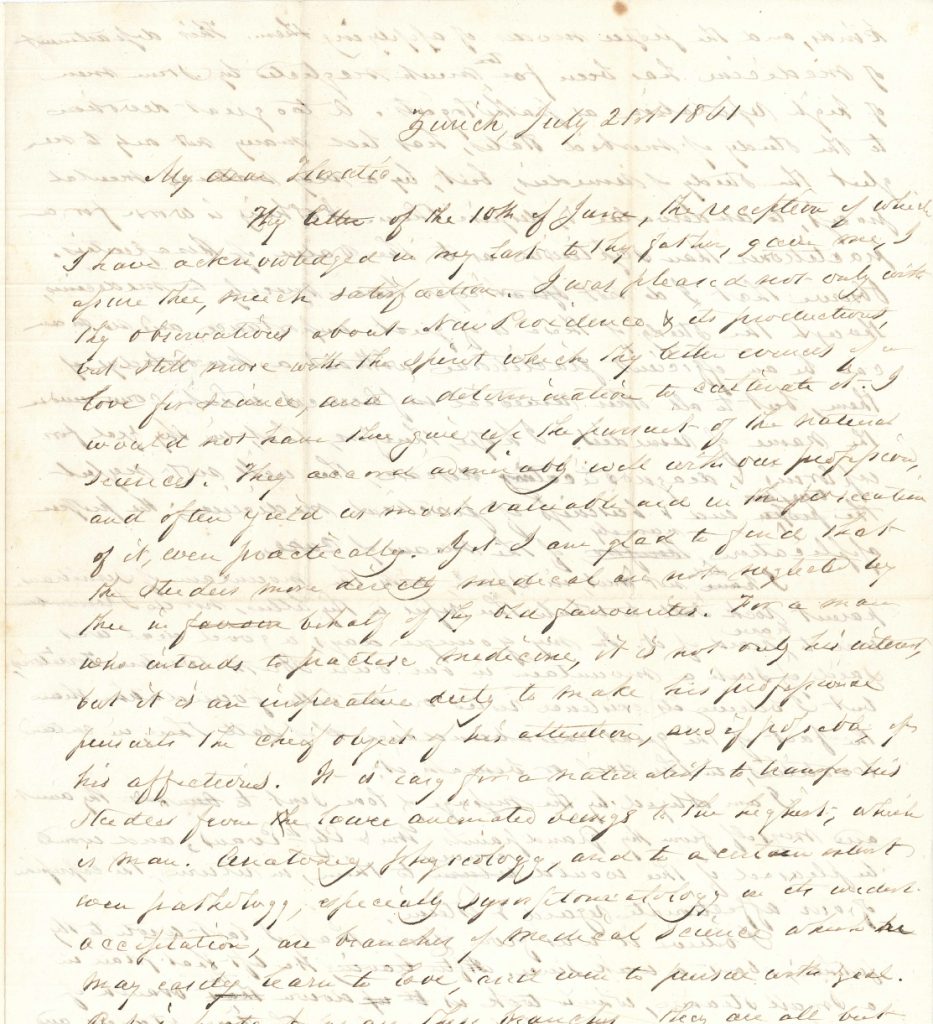 Mark Frazier Lloyd, Director of the University Archives and Records Center, has announced a significant gift to the University’s archival collections on the history of American medicine and medical education. Penn alumna Susan Molofsky Todres has donated a rare autograph letter signed (ALS) of George Bacon Wood, A.B., M.D. (1797-1879), written in July 1861 to his nephew, Horatio C Wood Jr. (1841-1920), in which the elder Wood carefully and thoroughly advises the younger man (who was then a student in Penn’s Medical Department) on the medical subjects which must be mastered in order to become one of Philadelphia’s leading physicians. The younger Wood followed his uncle’s views very closely and like him, steadily advanced in the profession until he was generally acknowledged as one of the most influential and highly respected medical educators at the School of Medicine of the University of Pennsylvania.

Susan Molofsky Todres has been a faithful and generous donor to the University Archives and Records Center for nearly two decades. On this occasion, she is very pleased to make this gift in honor of Dr. Gail Morrison, who is a distinguished member of Penn’s faculty of medicine, the Executive Director of the Innovation Center for Online Medical at the Perelman School of Medicine, and a Senior Advisor to the Executive Vice President and Dean of the Perelman School of Medicine.

Thy letter of the 10th of June, the reception of which I have acknowledged in my last to thy father, gave me, I assure thee, much satisfaction. I was pleased not only with thy observations about New Providence & its productions, but still more with the spirit which thy letter evinces of a love for science, and a determination to cultivate it. I would not have thee give ­­up the pursuit of the natural sciences. They accord admirably well with our profession, and often yield a most valuable aid in the prosecution of it, even practically. Yet I am glad to find that the studies more directly medical are not neglected by thee in favor behalf of thy old favourites. For a man who intends to practice medicine, it is not only his interest, but it is an imperative duty to make his professional pursuits the chief object of his attention, and if possible, of his affections. It is easy for a naturalist to transfer his studies from the lower animated beings to the highest, which is man. Anatomy, physiology, and to a certain extent even pathology, especially symptomology in its widest acceptations, are branches of Medical Science which he may easily learn to love, and even to pursue with zeal. But important as are these branches, they are all but preparatives or accessories of therapeutics. The great object of a physician is to cure disease. To do this most effectively he must as far as possible understand it. But the great point is to understand remedial measures of all kinds, and the proper modes of applying them. This department of medicine has been far too much neglected by some men of high reputation as pathologist. A too great devotion to the study of morbid states, has led many not only to neglect the study of remedies, but, by a very natural mental process, to undervalue & despise them. Nothing is worse for a practitioner than skepticism as to the value of therapeutics. Observe that I do not refer here only to medicines, though the study of these is of great importance, and no man can be an efficient practitioner without a knowledge of them, but to all other remedial influences which come under the name of remedies. I hope, therefore, that in thy zeal for exploring & diagnosticating disease, thou will not neglect the true end & business of practical medicine; the precise application namely of the means of cure.

I did not meet, in Spain, with the mountain of transparent rock salt all to which thee refers in thy letter, nor do I remember ever to have heard of it. In my younger days, a good deal was said of such a mountain in our own South Western Territories, but I believe its existence rested on no better foundation than the fact of the great abundance of it all there, in certain localities in the soil or beneath it.

I am obliged by the message of love sent to thy aunt and myself from thy grandparents Wm. and Elizabeth Evans, and would be pleased if thee would convey to them, in return, the expression of our affectionate regards & esteem.

I believe it was from Como that I last wrote to thy father, about a week since. We left that place in a small steamer, which took us down the branch of the Lake of Como at the head of which the town stands, and landed us at the village of Cadenabbia, on the West side of the Lake, just at the point at which it divides into its two branches. Here we found a very good house, and, as the situation was very charming, commanding a fine view of the beautiful mountains from opposite of the Lake itself, which is an exquisitely beautiful sheet of water, and to a certain extent, of the sweetly green banks upon our own side, we concluded to stay a couple of days, especially as one of these was Sunday, and I agree with thy aunt in thinking that it is best to be lie on that day when possible. We took a walk through the park like grounds of a neighboring palatial villa belonging to a Sovereign German Duke, who spends 2 or 3 weeks there every summer & when he is absent, allows his people to admit the [illegible] into the grounds & lower story of the house, where there are some fine statues and pictures. During Sunday we confined ourselves mostly to the Hotel; and it was, I assure thee, no cross to do so; especially as we had the resources of our books & [illegible], and could [illegible] these, when so disposed, by a look out our window, at the charming prospect. The Lake is here not so broad, so that we could distinctly see the two neat villages opposite and the beautiful villas scattered about on them, or on the declivity of the mountains, and could hear the sounds of the Church Bells coming over the water almost as clearly as if they had been but a few yards distant on our side.

We left Cadenabbia on Monday by steamer for the head of the upper part or main body of the Lake, which discharges the water brought into it by the River Adda & other streams, and also those of the Western Branch, through the Eastern branch, the outlet of which, leading down to the Po, still retains the name of the Adda. We were landed at the town of Colico, where we got a carriage and parted [illegible], crossing the Adda near the place where it empties into the Lake, and ascending the River Maira as far as Chiavenna. We expected to have left this town next morning; but a small storm came in in the night & continued till so late in the day that it was not deemed judicious to set off till the morning after; for we had to cross the Splügen Mountains into Switzerland, and the path is not safe in a storm. The neighborhood, however, of Chiavenna was so picturesque, with its surrounding mountains, its rapid and boisterous stream, and its vineyard covering every inch of tillable grounds, and clothing with a rich green a terraced declivity opposite our windows, which ascended half way up the mountain, that our detention, so far from being irksome, was really very agreeable. During the day I took a walk up the course of the Maira, and was surprised to come across, at the upper end of the town, a large cotton mill, which was supplied water by a stone canal carried to the top of a series of rapids down which the stream was rushing & foaming delightfully. A bevy of well-dressed & ruddy faced girls, who appeared to be returning from their dinner to their work at the Mill, smiled at the old gentleman kindly as they passed him. There was a beautiful water-fall a little further up the stream. It was interesting here to see the vines and even fig trees flourishing in the open air in the valley, while the tops of the neighboring mountains were covered with snow; what had been a rain-storm below having been a snow-storm in those higher regions.

I had intended to give thee an account of the passage of the Splügen; but find that I shall not have nearly space enough in what remains of the present sheet, and it is hardly worth while to trouble thee with a second. I shall, however, write before long to thy cousin Nannie, to whom I owe a letter, and will attempt to describe in my letter to her, not only our passage of the Alps, but some interesting things which we afterwards met with.

In the meantime I will only add that we are delightfully situated in a Hotel on the banks of the Lake of Zurich, with beautiful gardens between the house & the Lake, and a fine view of the town itself, which is one of the neatest and nicest that I have seen in Europe.

Thy Aunt sends her love, and joins me in love to father, mother, sisters, and brothers.

Affectionately thy Uncle
Geo. B. Wood