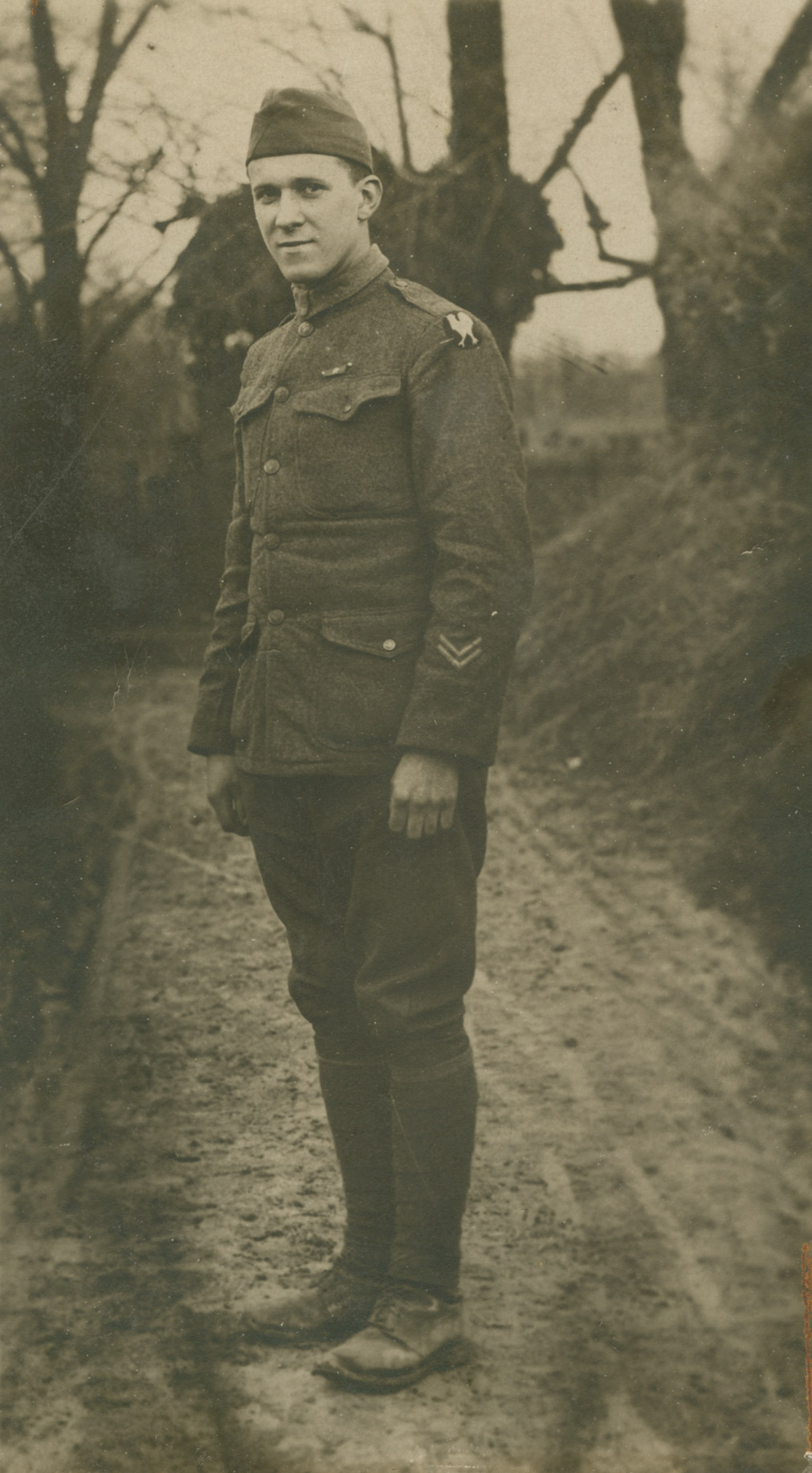 The John Rissel Kessler papers were donated to the University Archives by Margaret Kessler Gibson Fish in August 2017 (2017:052).

John Rissel Kessler was born in Philadelphia on November 27, 1895 to John Harold and Kate Raines Kessler. Rissel, as he was known, grew up in the Mount Airey section of the city with his siblings – Raines, Helen, and Edwin. In 1914 he entered the University of Pennsylvania to study chemical engineering at the Towne School. However, before his senior year, the United States entered World War I, and Rissel joined the Army.

Rissel served in Section 504 of the U.S. Army Ambulance Service. This was the first of three sections recruited at the University of Pennsylvania, and was mustered into service at Cooper Battalion Hall in Philadelphia in May 1917. On Jun 7 the section left for Camp Crane in Allentown, PA (which was located in the fairgrounds). The Section sailed for Europe on August 23 aboard the White Star Line RMS Baltic, arriving in England on September 16 before proceeding to France. Once in France the Section received orders to join the 158th French Division of the Third Army Corps at the Front at Lanchy in the Noyon Sector. The next assignment was with the 170th French Division at Peronne, taking park in the British drive on Cambrai on November 20. Eight days later they returned to the 158th Division at Rouvel, with their headquarters in the St. Quentin Front. In January 1918 the Section was moved to the Verdun Sector and attached to the 11th French Division, where they remained for the rest of the war. For their work with the division, the Section received the Croix de Guerre with Palm on December 10, 1918. Following Verdun they participated in the battles at Mondidier-Noyon, the Compiegne Sector, the Aisne-Marne offensive, the Somme offensive, the Oise-Aisne offensive, and the Yypres-Lys offensive. During their time in action, the Section suffered 1 killed, 2 died from illness, 26 wounded and gassed. After the Armistice was signed the 504 stayed in France until April, being one of the early section to sail for the United States on April 13, 1919 aboard the S.S. Mobile.

After his discharge Rissel returned to the University of Pennsylvania to finish his studies, receiving his B.S. in Chemical Engineering in 1920. During his career, Rissler worked for the Dill and Collins Co. Philadelphia, Dupont Rayon Co. Buffalo NY, the Philadelphia Electric Storage Battery Co., Rissel, and finally the Philco Manufacturing Company on Tioga Street in Philadelphia – where he was a design engineer. Rissel lived with his wife, Lela May Fetherstone, in the Chestnut Hill section of Philadelphia until her death in 1959 at the age of 57. They did not have any children. He was a member of the Philadelphia Cricket Club, American Legion, and Section 504 of the U.S. Army Ambulance Service Association. John Rissel Kessler died at age 72 in 1967.

The John Rissler Kessler Papers documents his time serving in the United States Army Ambulance Service during World War I. It consist primarily of correspondence from Rissler to his family, with the majority of letters being addressed to his mother, father, and siblings. There are a few letters to Rissler’s parents from other individuals, and an occasional letter to Rissler. Correspondence starts with his departure for Allentown in June 1917, and continues into the 1920s. Additionally the collection contains memorabilia from his time in the Army (e.g. medals, certificates, maps, and artifacts), as well as photographs and printed material. The collection also has a near complete run of the Radiator – The Official Newspaper of the United States Army Ambulance Service with the French Army.