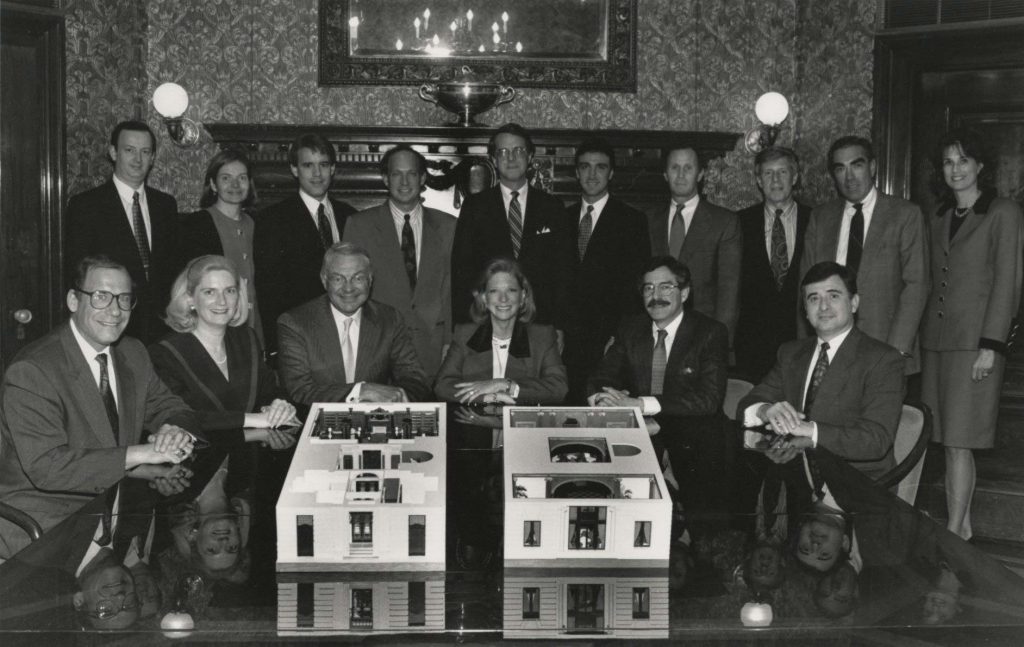 Penn Club of New York, Board of Governors, 1993
Get more image details

Alumni
Access to collections is granted in accordance with the Protocols for the University Archives and Records Center.
Download this finding aid as a PDF

The Penn Club of New York donated this collection to the University Archives and Records Center (UARC) in January 2014 (UARC accession number 2014: 003).

The records of the Penn Club of New York are organized into three series – General File, Clubhouse, and Photographs – each of which is arranged alphabetically.

The present-day Penn Club of New York dates only as far back as 1986, but the Club had existed previously in other New York City locations.

The first Penn Club of New York dates to 1900, when the New York Society of the Alumni of the University of Pennsylvania presented a plan to secure “a convenient suite of rooms in the middle of the city, adjacent to a café.” The first Penn Club of New York opened in October 1900 in four ground floor rooms in New York’s Royalton Hotel. During the ensuing decades and until 1966, the club would occupy various locations throughout Midtown Manhattan.

Shoemaker shared Franklin’s sentiments and appealed to his fellow trustees to assist in the drive to find an appropriate building to serve as a clubhouse. After a thorough search, the former Touro University Law School Building located at 30 West 44th Street was selected. Noted New York realty firm Cushman and Wakefield was instrumental in working with the Trustees in what became a complicated, two-year effort to purchase the building. It was not until the first and second of November 1989 that alumni and friends were able to gather at 30 West 44th to celebrate the acquisition of the 65,000 square foot clubhouse.

A Penn Club Committee was formed in 1991 to obtain funding for the renovation and outfitting of the interiors of the club. The committee led a large volunteer effort, which used newsletters and brochures to appeal to alumni and friends of the University of Pennsylvania. Renovations began April 16, 1992.

More than 7,000 alumni and friends joined the club as Charter Members by the summer of 1994 and on June 15, 1994 the Penn Club of New York officially opened its doors and the idea that started as a simple letter eight years earlier was finally realized.

More information about the Penn Club of New York can be found at http://www.pennclub.org.

The bulk of the historical records of the Penn Club of New York document the drive during the late 1980s and early 1990s to acquire and renovate a clubhouse which alumni of the University of Pennsylvania in New York would enjoy. This documentation includes exterior and interior renderings, brochures, reports, and three volumes of official Construction Documents. There are also several photographs which document the renovation as well as events that took place at the club. There is a small amount of documentation from the club’s earlier incarnation which is in the form of minutes dating from 1919 to 1944.