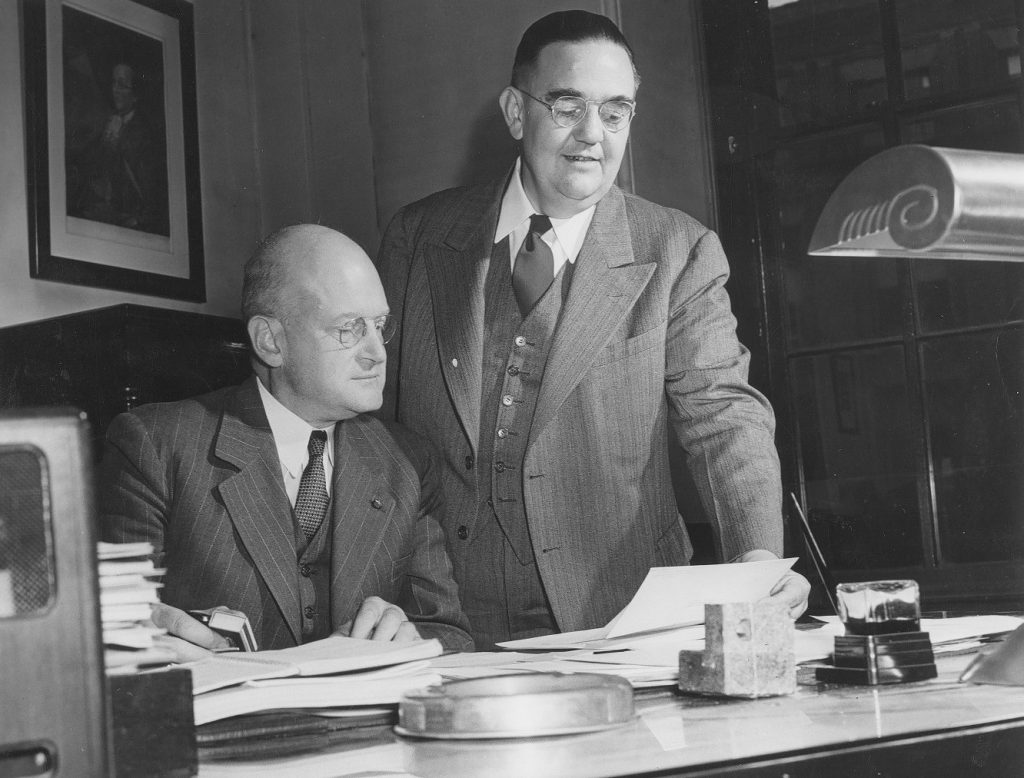 The Industrial Research Unit of the Wharton School of the University of Pennsylvania was founded in 1921 as the Industrial Research Department with a mission to “study the economic and social problems of business.” Sponsored by the Trustees of the University and financially assisted by the Carnegie Corporation, the Department worked in close relationship with a group of representative Philadelphia firms, which furnished data for research and analysis. From its inception to World War II, the Department, under the direction of two faculty members, Joseph H. Willits and Anne Bezanson, attracted worldwide attention for its pioneering studies of industrial relations. Its research results were well received by employer associations, government agencies, and international organizations. The major Research Associates working under the two directors during this period were C. Canby Balderston, Hiram S. Davis, Eleanor L. Dulles, Marion Elderton, W. E. Fisher, Miriam Hussey, Gladys L. Palmer, and George W. Taylor.

Under the leadership of its new director, however, the Unit soon succeeded in gaining necessary resources to fund new initiatives. By the summer of 1968, the Unit had become an active, vital organization again, advancing knowledge in industrial relations, labor market, manpower, and industry studies. In addition to contributing numerous articles to professional industrial relations and legal journals around the world, it completed two book series, the Racial Policies of American Industry Series and the Studies of Negro Employment, and established two new series, the Labor Relations and Public Policy Series, and the Manpower and Human Resources Studies. In 1972, it moved its offices to the newly-built Vance Hall, where they remain today. Around this time, Richard L. Rowan was appointed co-director of the Unit along with Northrup. In mid 1970s, the Unit formed the Multinational Research Advisory Group and started the Multinational Industrial Relations Series after receiving a gift from the Chase Manhattan Bank of the latter’s library of international labor law information.

After Northrup retired, Richard L. Rowan became director of the Unit in July 1988. In 1990, the institution was renamed “The Center for Human Resources.” The present center is more focused on the study of human resources and labor and personnel management. Organizationally, it comprises four major groups for research and information services. These include the Research Advisory Group, the Multinational Research Advisory Group, the Financial Employee Relations Study Group, and the Labor Relations Council. Although its staff consists of Wharton faculty members, the center has, since the 1970s, had its own budget independent of Wharton. During Northrup’s tenure, the Unit depended mainly on money from various foundations. The new center adds to its income from grants the proceeds from providing advisory services and issuing news letters to corporate members.

The collection documents the research work the Wharton Industrial Research Unit undertook from the 1920s to 1990s.

The Administration series features annual summaries from 1983 to 1989, Reports on Progress from 1978 to 1989, and an “Industrial research history file,” which chronicles all major activities the department carried on from 1922 to 1985. The material in the history file consists of department or group meeting minutes, important correspondence and internal memos, planning documents, research project progress reports, fund proposals, and the department’s statements on its mission and history to be used for various purposes.

The bulk of the collection is made up of research files, which fall into three major groups: studies in the 1930s and 1940s of labor, wages, employment and unemployment; the mobility study in the 1940s and 1950s; and the study of black employment in the 1960s and 1970s.

The Employment and unemployment studies cover a wide range of interest. In addition to the study of employment and job market in general, this series includes such sub-series as the study of domestic employment, the study of employment patterns at the household level, the hosiery industry study, the iron and steel industry study, the study of individual income and family expenditure, the Philadelphia study, the self-employment study, the textile studies, the study of skilled workers at the Philadelphia Navy Yard, a comparative study done by Gladys L. Palmer on the weavers in three textile centers (Philadelphia, Manchester, New Hampshire, and Paterson, New Jersey) from mid 1920s to mid 1930s, and the study of women in the labor force (including the study of women employment after World War II). The textile studies comprise research files of Hiram S. Davis as well as material he collected when he served in the government as Secretary of the Textile Committee under the Combined Production and Resources Board during the wartime (1943-1945). The Philadelphia Navy Yard “Tool-maker” study represents the only file in this collection that originated from the work of Anne Bezanson, one of the founders of the research institution.

The Labor studies and the Wages studies are closely related to the employment and unemployment studies. The two series provide valuable information in such areas as the fiveday week in the railway industry, child labor law, labor market, labor union policies, and statistics of earnings in different locations or by occupations. In addition, the Labor studies series features teaching material for a course on American labor movement, a major subseries related to a coalition bargaining study done in the 1960s and 1970s, and the proceedings of a Special Panel appointed by the federal government and chaired by George W. Taylor to assist in the settlement of a nationwide copper strike from 1967 to 1968.

The Mobility studies were extended over a period of more than two decades. The series features a six-city mobility study, and three similar projects on a more local scale–the Columbus (Ohio) study, the Illinois Study, and the Norristown (Pennsylvania) study. The six-city project files include original investigation schedules or transcription cards that record various aspects of the work history of the thousands of male and female workers interviewed in Chicago, Los Angeles, New Haven, Philadelphia, San Francisco, and St. Paul. They also include tabulations and other material that analyze factors that affected work attachment and contributed to labor mobility, geographical, vertical, or occupational. The files of the three local mobility studies consist of similar material.

The black employment studies from the 1960s to the 1970s concern a large variety of industries. The “Black employment–construction” series deals with the nationwide enforcement of the Equal Employment Opportunity Act exclusively in the industry of construction. Major locations examined include Boston, Chicago, Denver, Indianapolis, New York City, Omaha (Nebraska), Peoria (Illinois), Philadelphia, Rochester (New York), St. Louis, and Washington, D.C. The “Black employment–various industries” series documents the examination of the results of affirmative action in other industries, the most important of which include aerospace, iron and steel, petrol refining, pulp and paper, rubber, and textile. The collection contains in a separate series large quantities of correspondence regarding the promotion of equal opportunity in a dozen or so selected industries, among them farm implement, food, meat, oil, supermarket, and utilities. Included also are clippings on black employment across the nation.

The Methodology and problems series provides contains information on the specific methods and codes adopted in the conducting of various research projects as well as analysis of problems that appeared in those studies.

The products of numerous research projects sponsored by the Industrial Research Unit or its individual research associates can be found in the Research publications and papers series. The series includes published monographs and serials as well as unpublished papers from 1916 to 1996.

This collection also holds a wealth of reference and informational material. The census file contains data, national or local, gathered by the institution from the thirties on in connection with its current research interest in labor, employment, and personal or family earnings. The Regional economy file concentrates on the development of regional economy in various localities both inside and outside the country. Finally, the Reference material series consists in large amounts of publications, unpublished papers, and notes, divided by subject into five categories–black employment, industry and economy, labor and employment, wage and earnings, and the Works Progress Administration’s publications of the National Research Project on reemployment opportunities and changes in industrial techniques.

1. The Urban Archives of Temple University holds the Gladys Palmer/Philadelphia Labor Market Study Collection, 2 cubic feet. The study was a project sponsored by the Work Projects Administration under the overall heading of the National Research Project on Reemployment Opportunities and Recent Changes in Industrial Techniques. The collection contains over 2,000 forms under each of the following four categories: Radio industry; machinists; weavers; and hosiery workers.

2. In October 1963 and January 1964, the Industrial Research Unit deposited temporarily in the University of Pennsylvania Archives some 200 cubic feet of material, which included a group of 53 cubic feet specifically marked as related to the research in price, wages, cost and employment. Beginning from July 1970, the collection was withdrawn in several installments and transferred to various persons and departments on campus. While the rest of the collection has been accounted for as either accessioned by the University Archives in recent years or disposed of by relevant departments over time, that 53 cubic feet, which was on record of being in Professor Dorothy S. Brady’s charge up to mid-1970s, has not yet been located.

3. The Hagley Museum and Library holds records relating primarily to Herbert Roof Northrup’s work with the Unit in the 1970s and 1980s.