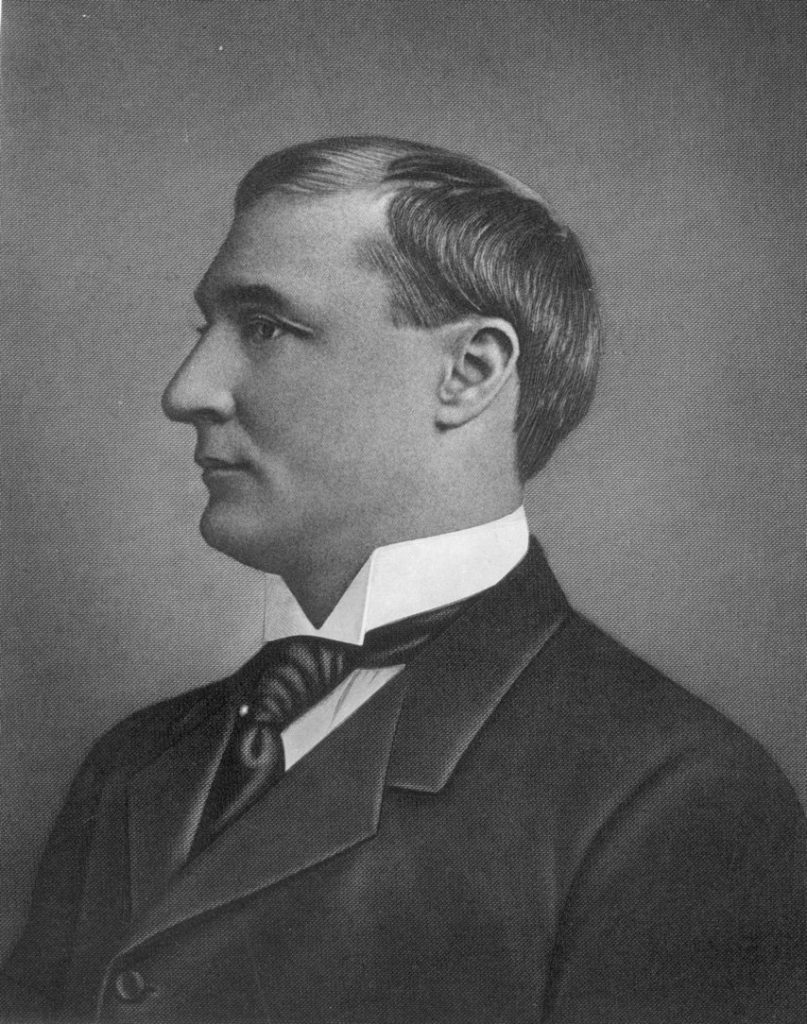 After being educated at Philadelphia’s Episcopal Academy, Samuel Frederic Houston entered the University of Pennsylvania’s Wharton School in 1883. The senior yearbook for the Class of 1887 shows that young Houston was active in many areas of college life. He was class treasurer in his sophomore year and class president in his junior year as well as a member of many class committees. He was also a member of the Racket Club and Delta Psi fraternity. His primary interest, however, was sports. Samuel Houston played on a number of class athletic teams: football for three years (serving as team captain in his freshman year), crew for two years (one as captain), and baseball for one year. He also played on Penn’s varsity football team of 1884 and 1885. In his junior year he joined the Boat Club and rowed with Penn’s eight-oared crew; he became a second-lieutenant and treasurer of the Boat Club, a delegate to the Rowing Association Convention and vice president of the Inter-Collegiate Rowing Association. He also served as vice president of the Athletic Association. Given his father’s connection with the Pennsylvania Railroad, it is interesting that Samuel Houston’s graduation thesis was entitled “A Plan for Governmental Control of Railroads.”

After graduation Samuel Frederic Houston followed in his father’s footsteps. He became president of the Real Estate Trust Company of Philadelphia, president of the former Guaranty Trust and Safe Deposit Company, and chairman of the board of the Pennsylvania Sugar Company. He also engaged in extensive real estate business in the northwest Philadelphia neighborhoods of Chestnut Hill, Mt. Airy, and Roxborough. The Henry Howard Houston Estate Papers help document how his family shaped these communities by buying, renting, and selling existing properties and also by building architect-designed homes.

Samuel Houston also served as a director of the Trust Company of North America and of the Pennsylvania Institute for the Deaf and Dumb. He was a member of many clubs and organizations, including the American Economic Association, the Historical Society of Pennsylvania, Pennsylvania Society of the Sons of the Revolution, the Philadelphia Academy of Natural Sciences, St. Andrew’s Society, Germantown and Philadelphia Cricket Clubs, Union League, Philadelphia Corinthian and New York Yacht Clubs, and Penn’s University Club. He was also a very active leader of the Episcopal church at the local, state and national level.

Samuel Frederic Houston was elected a trustee of the University of Pennsylvania in 1898 and served until his death. He also served on the boards of the University Museum and the University Christian Association and as president of the General Alumni Society. His alma mater awarded him the Alumni Award of Merit in 1938 and an honorary degree in 1939. 1939 was also the year Samuel and his sisters contributed generously for the building of additions to double the capacity of Houston Hall, the student union originally made possible by their father. Samuel Houston was notable for his frequent large contributions to the University of Pennsylvania, and also for his leadership of fundraising campaigns.

Samuel Frederic Houston married Edith Atlee, the daughter of Samuel Fisher Corlies. They resided at Brinkwood, their estate in Philadelphia’s Chestnut Hill, built in 1887 as a wedding present from Henry Houston for his son and daughter-in-law. The house was designed by the architectural firm of George W. and William D. Hewitt. After the deaths of both his wife and his father in 1895, Samuel Houston closed Brinkwood and moved with his son and two daughters to Druim Moir, the nearby estate of his mother. Samuel remarried in 1902 to Mrs. Charlotte Harding (Shepherd) Brown; together they had one daughter, Eleanor. Samuel’s only son, Henry Howard Houston II, was born in 1895; immediately after graduating from Penn in 1916, young Henry served with the army in Mexico and then in France. He died in the second battle of the Marne, on August 18, 1918.

Samuel Frederic Houston died at his home in Chestnut Hill on May 2, 1952.