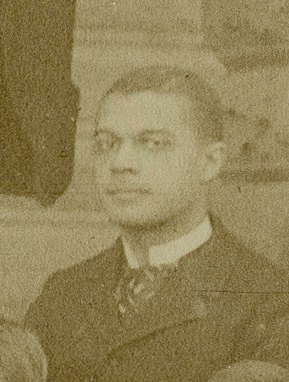 Joseph Hunter Lewis was born in Philadelphia, September 22, 1870, the son of Robert Randolph Lewis and Anna/Hannah Mary Cooper. Joseph’s father Robert (1831–1883) was born in Richmond, Virginia and first appears in Philadelphia city directories around 1860 as a bartender living with his wife’s family at 1320 Catharine Street. Anna (ca. 1838–1895) was from a free African American family in Charleston, South Carolina. Her parents, Parris Charles Cooper (ca. 1808–1861) and Susan Elizabeth Telfer (1810–1902), settled in Philadelphia in the 1850s. The Lewis and Cooper families lived in the same house at 719 Erie (now S. Warnock) Street into the early 1880s and later at 768 Florida (now S. Marvine) Street. The family retained connections with South Carolina and made occasional visits to see Joseph’s uncle, Rep. Joseph Hayne Rainey (1832–1887) – the first African American to serve in the U.S. House of Representatives. Robert and Anna Lewis had four children: Florence A. (b. 1859), Randolph C. (b. 1863), Robert (b. ca. 1866) and Joseph H. After her husband’s death in 1883, Anna supported her family on her dressmaker’s income as well as the money earned from her daughter’s teacher’s salary and sons’ newspaper correspondent and butler salaries.

Joseph H. Lewis attended Philadelphia public schools. He began his studies at the Roberts Vaux Grammar School and in February 1886 was admitted into the 93rd Class of Central High School but left the four-year program early in February 1888 to prepare for applying to the University of Pennsylvania. After several months of study under Alonzo Brown who ran a well-known college prep school in Philadelphia, Joseph took and passed the Penn entrance examinations in June 1888. He was admitted to the University in the Towne Scientific School course of study in the fall of 1888. With the aid of a City of Philadelphia Mayor’s Scholarship, he was able to complete the course in 1892, earning a Bachelor of Science degree, and stayed an additional year for post-graduate study to earn the technical degree of Mechanical Engineer. He received academic honors of the third grade in both his freshman and sophomore years. The only extracurricular activity he is known to have participated in was a class sports contest in 1889 where he won the 440-yard dash and the one-half mile race.

Shortly after graduating from Penn, Lewis was able to find employment in his field. His first job was with the Consolidated Electric Storage Company in Philadelphia. In 1895 he became the superintendent of the new electric light plant for the University Club in the 1300 block of Walnut Street. After a brief stint as a draftsman for S.A. Neidrich, Lewis decided to seek better opportunities in South America in 1898. He worked as an engineer for the American Gold Dredging Company in Quibdó, Colombia for about four years. Around 1903 Lewis returned to Philadelphia. He worked as draftsmen for two new automobile companies – the Keystone Motor Company and the Searchmont Motor Company. Sometime around 1910 Lewis moved to the New York City where his brother Randolph lived. Lewis found work as a draftsman for the engineering firm of Gunvald Aus Company at the time they were working on the Woolworth Building plans.

Joseph H. Lewis died in New York City on Christmas Day in 1914. He never married. His brother Randolph Cooper Lewis (1863–1934) was a writer and journalist who worked for a number of Philadelphia and New York City newspapers before venturing into a screenwriting career with Pathé Exchange. Joseph’s sister, Florence A. Lewis Bentley (1859–1943), started her career as teacher in Philadelphia and later became an activist with the National Citizens’ Rights Association and, like her brother Randolph, a journalist and writer – author of the short story “Two Americans.”