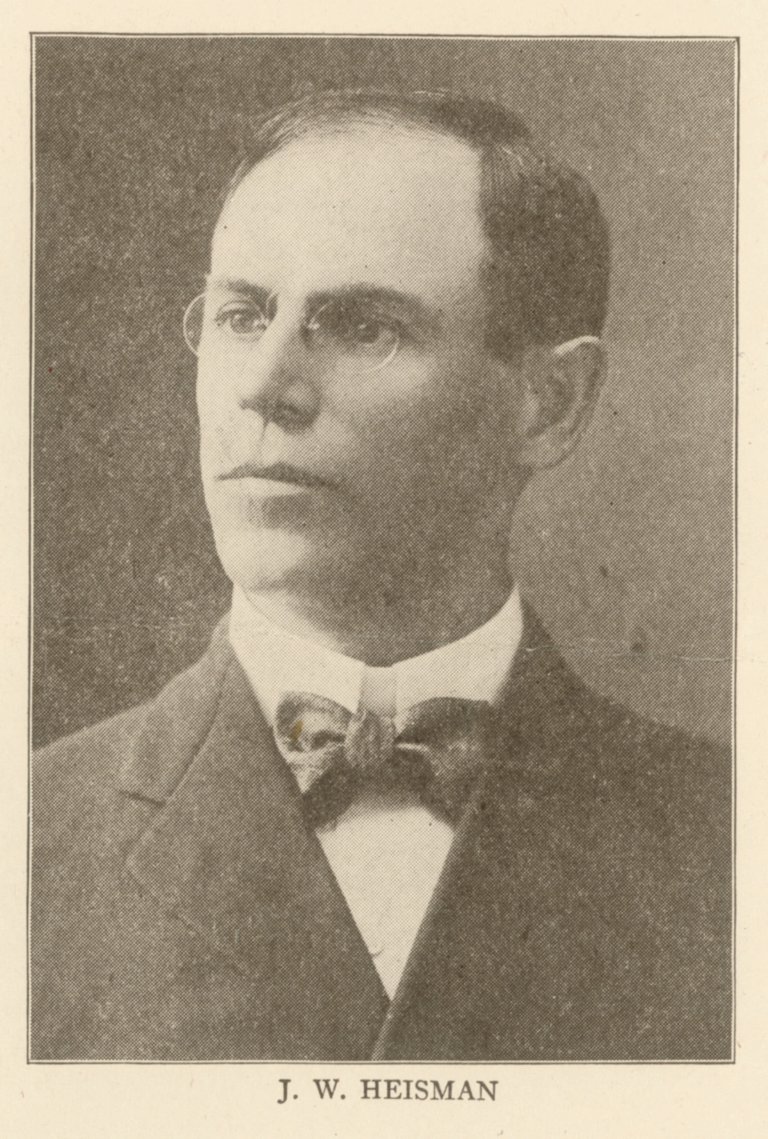 John William Heisman was born in Cleveland, Ohio, on October 23, 1869, and grew up in the oil fields of northwest Pennsylvania, near Titusville. He began college at Brown University in 1887, where he played football with members of his class. After two years at Brown, Heisman enrolled in the University of Pennsylvania Law School. While at Penn, Heisman played on the 1890 and 1891 varsity football teams as guard, center, tackle and occasionally, end.

Heisman never practiced as an attorney, even though he received his law degree in the spring of 1892. Instead he dedicated his professional life to football. Immediately after his law school graduation, Heisman started his coaching career at Oberlin College, leading its football team to win all seven of its games in the second year of its football program. During his 36 years of college coaching, he would also coach at Akron Buchtel College (now Akron University), Auburn, Georgia Tech, Penn, Washington & Jefferson, and Rice. His most impressive coaching results were at Georgia Tech from 1904 to 1919 where the team had a winning streak of 33 games and once beat an opponent 220-0, the most one-sided game in college football history.

Heisman was well-known as an innovator in the sport and as the primary shaper of the football rule book of his day. He is given credit for introducing the vocal “hike” or “hut” signal for snapping the ball, scrimmage lines, interference on end runs, hidden ball play, double pass, and using the quarterback at safety on defense. In 1906, after three years of dogged effort, he accomplished the legalization of the forward pass. Heisman also played an important role in the development of shoulder and hip pads, of the statistical score board, and of the division of the game into quarters. He is also remembered for his development of football psychology to motivate players in the locker room and on the field. Heisman himself described some of his contributions to the developing sport of football in an article appearing in the October 1908 issue of Baseball Magazine.

After his retirement from coaching in 1927, Heisman devoted much of his time to writing about the sport; his articles appeared in magazines such as American Liberty and Colliers Magazine and he served as football editor for the Sporting Goods Journal. In May of 1930 he was named as the first athletic director of the Downtown Athletic Club of New York City; in this capacity he founded the Touchdown Club of New York and then the National Football Coaches Association.

Although he personally emphasized the team over the individual, at the insistence of the officers of the Downtown Athletic Club, Heisman organized the voting system used to determine the best collegiate football player in the country each year. The first award was presented in 1935 to Chicago’s Jay Berwanger.

When Heisman died of bronchial pneumonia in New York City on October 3, 1936, before the second award was decided, the officers of the Downtown Athletic Club voted unanimously to rename the award the “Heisman Memorial Trophy” in his honor.