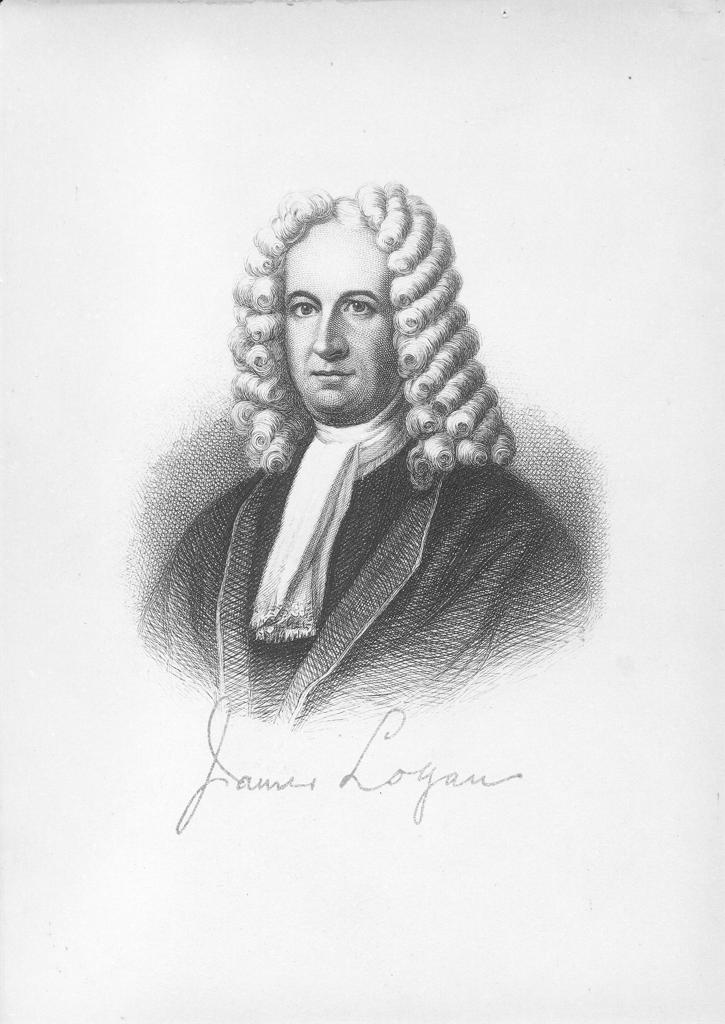 James Logan was born in Lurgan, Ireland, the son of Patrick Logan, a scholar with a Master of Arts from the University of Edinburgh and also an Anglican clergyman until his conversion to Quakerism. James also proved to be a scholar, learning Latin, Greek, and Hebrew from his father before being apprenticed at age thirteen to Edward Webb, a Quaker linen draper in Dublin. Soon, however, James moved with his family to Bristol, England, where his father had been appointed master of the Friar Meetinghouse School. In 1693, James replaced his father as master of the school. When William Penn served on the board of this school, he was impressed with young James. Penn invited Logan to serve as his secretary in Pennsylvania.

Thus, in 1699 at age twenty-five, Logan sailed with William Penn on the latter’s second voyage to America. Penn made Logan his chief steward in the province, charged with the responsibility for land transactions and the collections of proprietary revenues. To these ends, after Penn’s return to England in 1701, Logan was appointed commissioner of property (1701), clerk (1701), receiver general (1703), and member (1703) of the provincial council. Logan also served as mayor of Philadelphia (1723) and was appointed to the Philadelphia County bench (1726), and served as chief justice of the Pennsylvania Supreme Court (1731-1739).

Politically Logan worked to keep as much legislative power as possible in the hands of the council rather than an elected assembly or local officials; his actions as representative of the proprietor were not always popular or without controversy. Logan represented the “Proprietary party,” consisting primarily of wealthy Philadelphia Quakers and supporters of the Penn family, people with aristocratic sympathies.

By virtue of his official position and his own business skills, Logan accumulated considerable wealth through land investment, fur trade with the Indians, and the shipping of provisions to the Carolinas, rum to Newfoundland, and lumber to the Mediterranean.

In 1714 Logan married Sarah Read, daughter of merchant Charles Read, and they had four children. In 1726 Logan established a family seat, the plantation and mansion known as “Stenton,” near Germantown. Here he not only entertained on a grand scale, but also found the opportunity to perform botanical experiments (such as his plant reproduction study proving that maize reproduced sexually), and to write and publish scholarly articles on botany, astronomy, and mathematics. Always the scholar, he contributed many papers to the American Philosophical Society as well as to English journals. After Logan’s death in 1751 at Stenton, he left many legacies, including the public use of his large private library of more than 3,000 volumes, subsequently acquired by the Library Company of Philadelphia.

At age seventy-four, two years after his retirement from public office, Logan was a founder of the Academy of Philadelphia (the origins of the University of Pennsylvania), serving as a trustee until his death two years later.