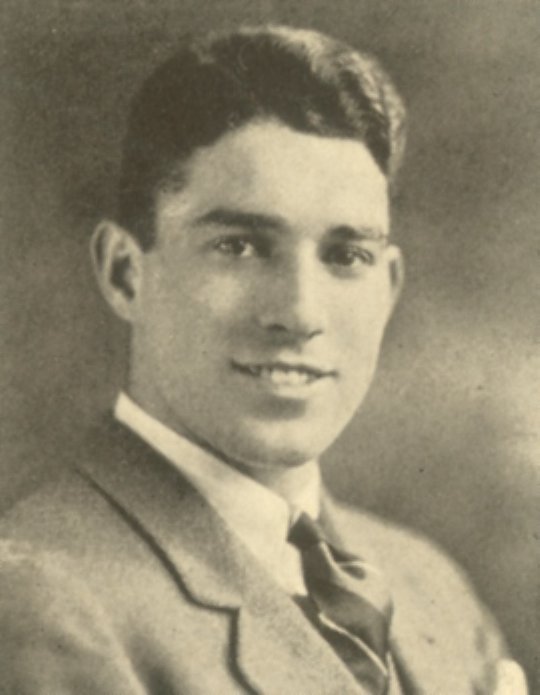 James Cuthbert Gentle was born in Boston, Massachussets, on July 21, 1904. After attending Brookline High School, he entered the University of Pennsylvania in 1922.

While at Penn, Gentle was active in sports and other extra-curricular activities. After playing football his freshman year, he switched to soccer and track for his last three years. In his junior year he was an All-American on Penn’s intercollegiate championship varsity soccer team. Off the field Gentle was president of his class and chair of his sophomore prom and also a member of the Delta Upsilon fraternity, Mask and Wig Club, and the Varsity Club. He graduated from the Wharton School with a B.S. in Economics in 1926.

Gentle’s athletic career did not end with his graduation from Penn. After graduation he played soccer with the Philadelphia Field Club and was selected as a member of the U.S. soccer team that finished in third place at the 1930 World’s Open Soccer Tournament in Uruguay. The next year, Gentle played on the U.S. Olympic field hockey team in the 1932 Games in Los Angeles and helped the team earn a bronze medal. He would also join the team at the next Olympics in Berlin but he and his teammates (including Wilson Thomas Hobson) would return without another medal.

Immediately after his college graduation, Gentle coached soccer at Haverford College. In 1931, about the same time he married Eleanor Widener Dixon, he began working for the Mutual Life Insurance Company. Having joined the Army Reserves in 1931; Gentle saw active duty during World War II, leading his infantry unit in the fighting at Salerno and in the mountains behind Monte Casino before joining Patton’s forces in northern Europe. At the end of the war, Major Gentle served briefly as U.S. trade and industry officer for the American zone of Germany. He would continue in the Army reserves with the rank of Colonel until 1956.

As a civilian, Gentle returned to the Mutual Life Insurance Company as an insurance underwriter, earning a place in the Million Club for where his sale of over a million dollars in life insurance coverage. He was president of the Penn Varsity Club from 1949 to 1953 and served on the Advisory Board on Athletics during his tenure. He was also a member of the Philadelphia Cricket Club, the Racquet Club and and the Sunnybrook Golf Club. James Cuthbert Gentle died on May 22nd, 1986, in Philadelphia.