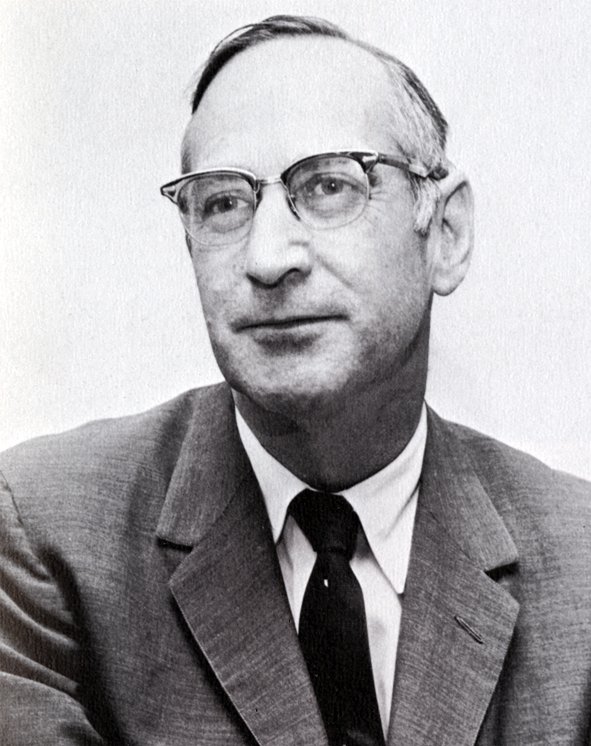 David Rockwell Goddard was a professor of botany and biology at the University of Pennsylvania from 1946 to 1975 and served as Provost the University from 1961 to 1970. He was born on January 3, 1908, in Carmel, California, to Pliny Earle Goddard, anthropologist and curator-in-chief of the American Museum of Natural History, and Alice Rockwell Goddard. Raised in Leonia, New Jersey, Goddard’s interest in botany and horticulture was sparked during his teenage years helping his father operate a nursery near their home. He attended the University of California at Berkeley where he earned a B.S. in Botany (1929), an M.S. in Botany and Microbiology (1930), and Ph.D. in Botany and Biochemistry (1933).

After completing his Ph.D., Goddard served as a National Research Council Fellow at the Rockefeller Institute for Medical Research. He then joined the faculty of the University of Rochester in 1935 as an instructor in botany, becoming associate professor and chair of the Department of Botany in 1941. Following a Guggenheim Fellowship at the University of Chicago from 1942 to 1943, Goddard was promoted to full professor at Rochester.

Goddard joined the faculty of the University of Pennsylvania’s Department of Botany in 1946. After four years with the department, he was granted a scholarly leave to pursue a Guggenheim Fellowship at the University of Cambridge. Upon his return to Penn, Goddard became chair of the Botany Department in 1952. Recognizing that the field of botany was being supplanted by the field of microbiology, Goddard led the effort to create a combined Department of Biology in 1957, of which he was appointed director.

In 1955, the Faculty of the University of Pennsylvania began what was called the Educational Survey, on which Goddard was a member of the Executive Committee of the Faculty Advisory Committee. The survey’s purpose was “to study policies and practices which contribute most effectively to the development of the strongest possible faculty working under the best possible conditions.” In 1961, the trustees inaugurated the Integrated Development Plan and Goddard was made a member of its Joint Committee of Trustees, Administration, and Faculty. The purpose of the Integrated Development Plan was to “map the University’s development at all levels over the next five to ten years” and “to determine the directions which University policy should take in the revision of its curricula and other academic practices to respond to the recommendations of the Educational Survey.”

In 1961 Goddard accepted President Gaylord P. Harnwell’s offer to become provost. During his tenure, he dealt with controversy over the University’s research projects, some of which were related to classified military research and therefore not publishable. This included programs under contract to the Department of Defense and which were approved by the office of the provost. There were sit-ins, picket lines, occupied buildings, teach-ins, and general mayhem. Goddard responded to the upheaval by accepting the complaints and supporting an open dialogue among students, faculty, and administrators.

Goddard retired as provost in 1970. The University awarded an Alumni Award of Merit for his distinguished service even though he was not an alumnus. He continued teaching, serving as professor of science and public policy and then professor of biology until his retirement in 1975.

Goddard was very active outside of the university as well. He was a consultant to the National Science Foundation, the United States Public Health Service, and the President’s Science Advisory Committee. He also served on the National Advisory Council on Health Research Facilities of the National Institutes of Health and was a member of the National Academy of Sciences’ Committee on the USSR and Eastern Europe from 1958 to 1968, serving as chair from 1964 to 1968. He became a member of the American Philosophical Society in 1954 and served as a councillor from 1972 to 1975, and was a member of the Library Committee from 1973 to 1985, the Committee on Council Nominees from 1974 to 1975, and the Advisory Committee on Elections from 1975 to 1983. In addition, Goddard was elected president of four scholarly societies: the American Society of Plant Physiology, the Society for General Physiology, the Society for the Study of Growth and Development, and the American Association for the Advancement of Science.

Goddard married Doris Martin in 1933 and had two children: daughter Alison was born in 1938 and son Robert was born in 1946. Doris Martin Goddard died of cancer in 1951. In 1952, Goddard married Dr. Katherine Evans (M ’43), an associate in pediatrics in the School of Medicine of the University of Pennsylvania and director of pediatrics for the out-patient department of the University of Pennsylvania Hospital. David Goddard died in July 1985, aged 77.