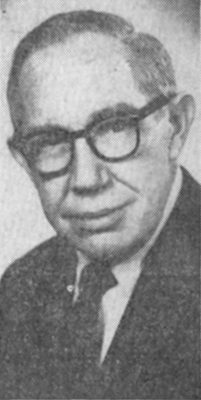 Benton Murdock Spruance, c. 1960
Get more image details
Benton Murdock Spruance drew the sketch of Forward Pass Franklin Field which appears on the University of Pennsylvania Bicentennial Wedgwood China plate, Forward Pass Franklin Field. Born in Philadelphia in 1904, Spruance studied architecture at the University of Pennsylvania, but left Penn in the mid-1920’s before earning a degree. After he left Penn in the mid-1920s, he studied at the Pennsylvania Academy of Fine Arts and in Europe.

When he returned to the U.S. he began to work in color lithography, the field that would become his specialty. Spruance eventually became an internationally known artist whose art is in the permanent collection of numerous art museums around the world including the Philadelphia Museum of Art. He twice received prestigious Guggenheim Fellowships for his art. Spruance directed the printmaking department at the Philadelphia College of Art and the art department at Beaver College. He won many awards during his lifetime including the Philadelphia Art Alliance Medal of Achievement in 1965. 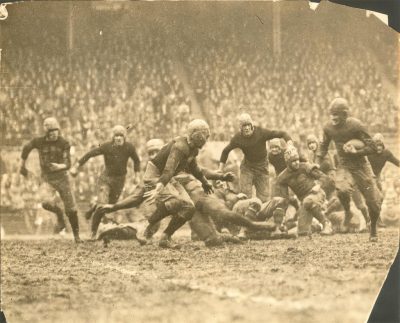 Football, Penn vs. University of Illinois, 1925
Get more image details
The first playing fields on the West Philadelphia campus of the University of Pennsylvania were on the site of the present Quadrangle dormitories. When construction began on these dormitories in the early 1890s, the playing fields were relocated near the intersection of 33rd Street and South Street. The original Franklin Field was finished on this site in 1895, in time for the first Penn Relays. The current Franklin Field, built between 1922 and 1925, was designed by Charles Zeller Klauder and the firm of Day and Klauder. In its early years, Franklin Field had a maximum capacity of over 84,000 but that has since decreased due to safety regulations.