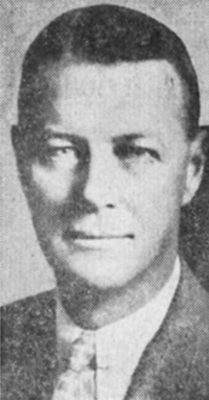 Joseph Patterson Sims (1890-1953), B.S. 1912
Get more image details
Joseph Patterson Sims drew the sketch which appears on the University of Pennsylvania Bicentennial Wedgwood china demitasse cup depicting Furness Library. He was born in Philadelphia in 1890, the son of John Sims, A.B. 1865. After his early education in Switzerland and at St. Pauls School in New Hampshire and Chestnut Hill Academy in Philadelphia, Joseph P. Sims earned the degree of Bachelor of Science in Architecture from the University of Pennsylvania in 1912.

After graduation Sims worked briefly for architect Arnold Moses and then for Furness and Evans, the firm of Frank Furness which designed the library here depicted by Sims. When he left Furness and Evans in 1917, Sims started a firm in partnership with a former colleague, Charles Willing; in 1921 James Talbutt as added as the third partner. The firm became successful in designing residences, particularly those in the Norman farmhouse style, although Sims himself was most interested in colonial revival styles.

During World War I, Sims served as a lieutenant in the Ordinance Department. In 1940 he became a fellow in the American Institute of Architects. 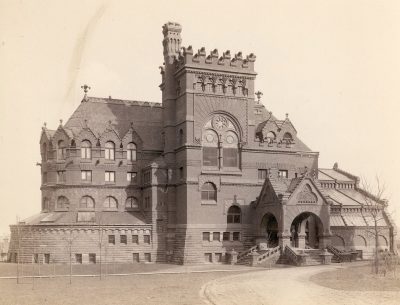 University Library (now Anne and Jerome Fisher Fine Arts Library), c. 1899
Get more image details
In the latter part of the nineteenth century, the University of Pennsylvania began to switch from lecture-based teaching to research-based teaching, and therefore needed more space for books. Frank Furness was commissioned to design a library to house these books. In 1891 the construction of the new library was completed. Additions were designed by Furness’s old firm, Furness and Evans as well as Robert Rhodes McGoodwin. The additions were easy to fit into the existing structure as Furness designed the library to expand as the university expanded.