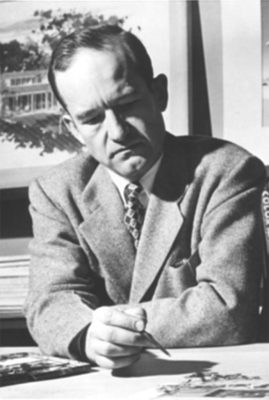 George Cooper Rudolph, Jr. (1912-1997), B.S. 1933, M.S. 1934
Get more image details
George Cooper Rudolph Jr. drew the sketch of the Provost’s House which appears on the University of Pennsylvania Bicentennial Wedgwood china demitasse cup. He was born in Philadelphia in 1912. He earned the degree of Bachelor of Architecture from the University of Pennsylvania with the Class of 1933, and the degree of Master of Architecture with the Class of 1934. While a student at Penn, Rudolph was awarded the T.P. Chandler scholarship for advanced study and the Stewardson Memorial Traveling Fellowship.

In the late 1930s, Rudolph began his architectural career in New York City where he designed parts of the New York World’s Fair. During World War II he designed buildings for the US Army. In 1947 he won the Chicago Tribune’s “Better Rooms for Better Living” competition. After 1955, Rudolph did not work in a firm in which his name was not on the letterhead. He died in South Carolina in 1997. 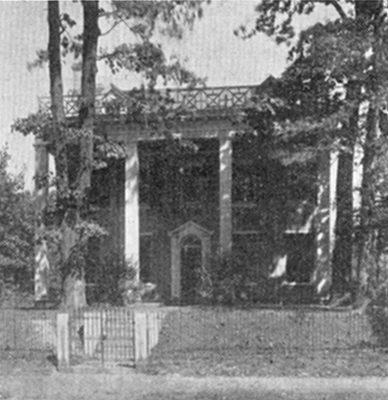 The remodeling and additions to the Provost’s house were designed by John Torrey Windrim. As construction and remodelling progressed, the building was used as office space for the Trustees and several secretaries, as well as a place to entertain guests of the University. 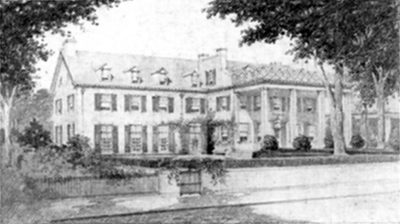 Provost’s House, architectural rendering of proposed changes, c. 1920
Get more image details
Unfortunately, changes in the structuring of Penn’s administration happened at about the same time as the remodeling of the Provost’s house, with the result that only one provost and one president ever lived in the residence. From the University’s founding until 1930, its chief executive was the provost; but in 1930, the position of president was created as the University’s top administrative post, relegating the Provost to a secondary position. In 1925, Provost Josiah H. Penniman moved into the Provost’s House as Penn’s chief administrator; after the office of president had been created and Thomas Sovereign Gates had been named Penn’s president, Penniman remained in the house as Provost. Penniman died in 1939. From 1944 until 1948, the Provost’s House was occupied by Penn’s second President, George William McClelland. The Provost’s House was the residence of Norman Topping, the Vice-President of Medical Affairs, from 1952 until 1957. In 1959, John L. Moore, the University’s Business Vice-President, moved in. Two years later he moved out and soon thereafter, the University sold the building. It is now on the Philadelphia Register of Historic places.

Architects: Newman and Harris with renovations and additions by John Torrey Windrim (1866-1934)