Evolution of the Event

For five brief years in the early 20th century, the Push Ball Fight surfaced as one of the traditional confrontations between University of Pennsylvania freshmen and sophomore classes. The first Penn Push Ball Fight, a replacement for the Wall Fight, took place on Franklin Field on October 22, 1908.

The ball to be pushed was always quite large in size. The ball used in the first fight was six feet in diameter. After the 1908 event, inflatable balls five feet in diameter were brought from the State College (now Penn State University).

The fight began with the ball in the middle of the field and the two opposing classes lined up on their individual goal lines on opposite ends of the field. The point of the fight was to move the ball over the opponent’s goal line. At the sound of a whistle, the members of each class rushed to the huge ball and tried to score a goal, hopefully by straight clean line backing as in football rather than by means of slugging matches. 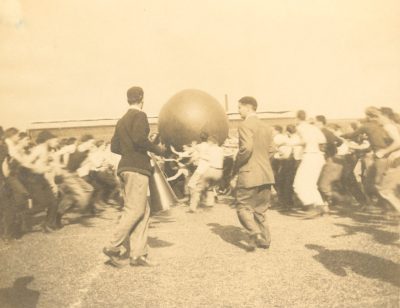 Specific rules changed over time. In the beginning, there were two halves. If a goal was scored quickly by one class, a second half was played. If neither side scored within the two ten-minutes halves allotted, the victory fell to the side which had kept the ball in the their opponent’s territory for the greater length of time. In case of a tie score, the class which made the best time was declared the winner.

In 1909, these revisions were made to the rules:

In 1912 new rules were laid down to prevent ties so as to make the event more result-oriented and hence interesting. The fight was divided into ten-minute quarters rather than halves. At the end of each quarter, two points were to be awarded to the side which placed the ball in the opponent’s territory. If the ball was pushed over the goal line, five points were to be awarded to the scoring side.

There was, however, more to the Push Ball Fight than the action on the playing field. There were also off-the-field maneuvers such as the 1908 kidnapping of freshman class president Morris, a practice outlawed by the Undergraduate Committee in November 1911.

In 1913 the Undergraduate Committee abolished the Push Ball Fight in favor of the Flour Rush. The Marshall for the first Flour Rush explained this decision:

“The Push Ball contest was not very interesting to the spectators, nor to the participants. Generally, there were only a few that were doing the work, while the remainder of the underclassmen were scattered around the field. The Flour Rush promises to be much more interesting to the spectators and the contestants. In this contest every man will have a share in the rush, and they will all be massed together and not scattered over a wide area. The concentration will result in a truer indication of class strength, a result much to be desired.”

Thus ended the short-lived Push Ball Fight tradition at the University of Pennsylvania.