“It is on this occasion that His Majesty of the cloven hoof appears, riding in state amongst his followers, surrounded by a halo of kerosene glory, from the torchlights of his sturdy guard of doughty Sophomores.”

Beginning in 1877, merry sophomores, in darkness near the U.S. Mint, met for a funeral procession through the streets of Philadelphia. Dressed in black robes and mortar boards, students walked as the school band played a funeral dirge. Carrying oil lanterns, the mourners sang and wailed over small coffins containing the source of their vengeance; the class Syllabus and Plate. After finding their way to West Philadelphia, the sophomores arrived on campus to begin the ritualized effigy ceremony. With program and hymnbook in hand, an elected student made an offer to pardon the offending parties. When no crowd member accepted the offer, the pyre was lit and the Syllabus and Plate were given their last rights before being placed in the fire. Once the cremation commenced, a requiem was given, followed by hymns, poems and speeches about the dead.

Around the year 1880, the Syllabus was discontinued, leaving students to replace it with the year’s worst textbooks. Later, students added the tradition of burning in effigy their most uninspiring professors, whom they voted on by ballot box.

Continuing the rivalry between the freshman and sophomore classes, freshmen contributed to the evening by assaulting the sophomore class with rotten eggs and other projectiles. This torment often led to fighting. The cremation exercises were abolished around 1930 after years of riotous clashes with fellow students and the police following the ceremony. 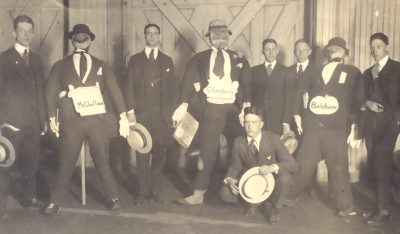 Sophomore Cremation, 1918
The victims of 1918, from left to right, were William McClellan, dean of the Wharton School; George Chambers, professor of mathematics; and Alden Baldwin, instructor of mechanical engineering.
Get more image details
Return to top
1883 Program »
X