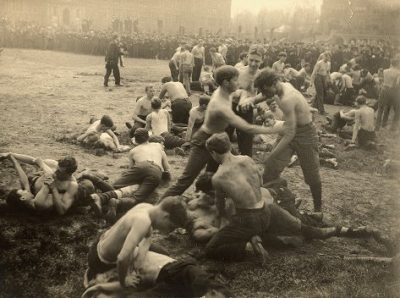 How fell the rain! More slippery grew the mud
Already slippery from the trampling feet
Of Fresh. and Soph. whirled in a struggling mass
Across the campus to the restaurant,
Dragging the precious bowl. The eager throng
Of Meds, and “old boys” thinking of old times,
Raise a loud shout. The green walls echo back
The soul inspiring din, and from above
The fair spectators smile encouragement.
Cruel it seemed, perhaps, to strangers then,
That savage fists should close up bright blue eyes,
That mothers’ darlings, seized in ruffian hands
And tossed on high, should be allowed to drop
With sickening thud to the unyielding earth.
The ragged vestments of the combatants
A re worn away and hang in tattered shreds,
Yielding to spiteful grasp, or sometimes spurned
By their excited owners sans culotte,
Sans everything, in fact, except their shoes.
So on they fight until the battle ends
On Tuesday- take their failures with regret,
And reassure their terrified best girls;
Nay, proudly wear their wounds on Chestnut street 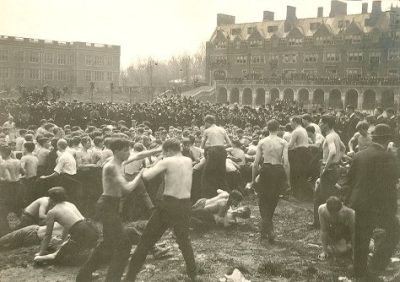