The origins of the bowl fight can be traced to the early 1860s, when there was neither a bowl nor a fight of any kind. In these early days, the University of Pennsylvania used a trimester system and had a custom of declaring honor men at the end of each trimester. The germ of the bowl fight was in the custom of ‘honoring’ the lowest freshman third honor student by the sophomores.

The basic idea of “honoring” the third honor freshman was to mock him because he was “so far from the head of his class that he has indeed little honor”. By 1864 there was a custom of presenting a wooden spoon to the third honor freshman. In 1866 the bowl made its first appearance in these shenanigans; however, there was no fighting involved at this point. In fact, the freshmen class showed no resistance at all, and the first bowl man, George Fox Martin ’70, submitted gracefully to being put in the bowl. Thus in 1866, the bowl and also the bowl man were in place. It had to be 1867, however, before there was a struggle of any kind over the bowl. 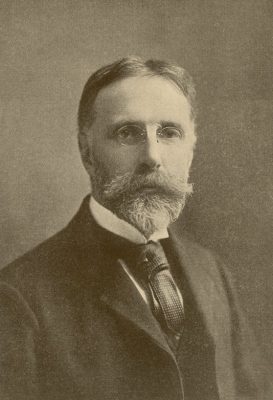 George Fox Martin, 1906
Get more image details
In 1867 the third honor man was Robert W. Lesley ’71. Lesley’s early recitation of a poem called “Three Little Grains of Corn” had immensely amused the sophomores. So on the day when the honors were called out, the sophomores were there with a wooden spoon and also a large wooden bowl in which they had put three little grains of corn. Their intention was to put the third honor man into the bowl and also to make him do his little poem recitation all over again. As soon as the freshman came out of the chapel, a rush was made for him. Lesley, however, quickly grasped the situation, made a bolt and escaped the sophomores. However, when he came back to the college after the Christmas break, he in his own words, “not only got ‘three little grains of corn’ but was showered, and pelted, and powdered with corn.”

This certainly is the first instance in which there was a struggle of any kind revolving around the bowl. And this particular incident can be quoted as the first ever bowl fight to have taken place in the University of Pennsylvania.