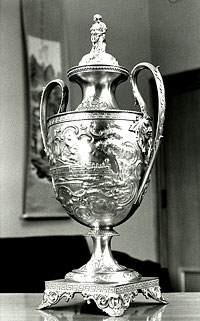 History is full of sweet irony. I hope I may quickly illustrate my point. The student directories in the University Archives say that when Eduardo Glandt arrived at Penn in 1973, he lived in Grad Towers at 37th and Chestnut Streets. Only a few months earlier that same year, this magnificent silver urn, the John Henry Towne presentation silver, had departed the Towne Building and moved off campus, where it was placed on long term loan. As a result, the students, faculty, and staff of this School were denied not only its grandeur, but also its inspiration. I remember Professor Glandt visiting the University Archives a few years ago, at the time of the centennial of the Department of Chemical Engineering. I do not remember if he saw the Towne silver then, but I am confident he will like it now. This evening, after a separation of twenty-six years, the University Archives and the Faculty of this School are pleased to reunite this symbol of greatness with it rightful possessor, the School of Engineering and Applied Science. We will restore the exterior of this 142-year-old treasure; commission a secure, museum-quality, permanent exhibit case; and re-install the Towne silver with an appropriate interpretative statement for its viewers. We do so in honor of the appointment of Eduardo Glandt as Dean of this great school and in recognition of his abiding interest in the history, identity, and future well-being of the School.

But first, before I let go of this awesome museum piece, I must tell you something about it. It was made in 1857 by two Philadelphia silversmiths, Robert and William Wilson, at the request of the board of directors of the North Pennsylvania Railroad Company. In the highest fashion of its day, it is worked in the Rococo revival style, a style also popular in furniture and other interior decoration. It is said to be unique in that the engine and cars of a railroad train are engraved on the bowl, chugging round and round. The Metropolitan Museum in New York owns a tea set by the Wilson firm and the Winterthur Museum in Delaware owns a pair of standing salts, both worked in the same style as the University’s urn, but neither on anything even approaching this massive scale. 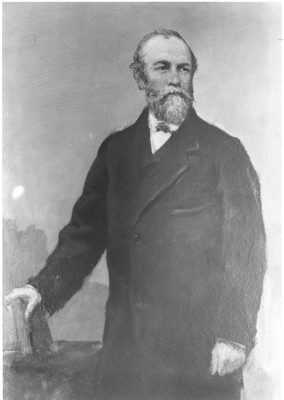 John Henry Towne, 1870
Get more image details
John Henry Towne was a mechanical engineer, who had a spectacular career designing and constructing heavy steam engines, particularly those used in ocean-going steamships. Like many successful Philadelphians, including our new Dean, Towne was not a native. He was born in Pittsburgh, where his father was in the steamboat business on the Ohio and Mississippi rivers. Towne arrived in Philadelphia in 1840 and learned mechanical engineering from Samuel Vaughan Merrick, one of the City’s pioneers in introducing the new technology of the Industrial Revolution. Merrick became the first President of the Pennsylvania Railroad and Towne became his junior partner. In 1848, at the age of 30, Towne left the Merrick firm to establish his own business.

Towne was already wealthy and among his many investments was the North Pennsylvania Railroad Company. In order to understand the Towne silver more fully, I recommend that Dean Glandt find his way to the old Reading Terminal head house building at 12th and Market Streets and down the escalators to SEPTA’s new Market East commuter rail station. There, if he will board the R1 Glenside train, or the R3 West Trenton, or the R5 Doylestown, he will travel over the rail lines whose original construction was superintended by John Henry Towne. The North Pennsylvania Railroad Company was incorporated in 1852 and soon thereafter began building its 55-mile line north to Bethlehem (the trunk portion of the North Penn includes today’s R1 Glenside rail line). Along the way the North Penn also built a 10-mile branch east from Lansdale to Doylestown (today’s R5 rail line). In July 1857 the first train traveled the entire roadbed, from Philadelphia to the terminal in Bethlehem. Three months later the branch to Doylestown also opened.

Almost from the day it opened, the North Penn made money. The directors were confident of this and therefore voted a silver presentation urn to man most responsible for their success, John Henry Towne. Anticipating the opening of the railroad, the directors presented the urn to Towne in June 1857. The North Penn met and exceeded its directors’ expectations. It became so profitable that in the mid-1870s the directors invested in a second branch railroad, this one from Jenkintown to Yardley, Bucks County, just across the Delaware River from Trenton. There passengers and freight alike could connect with trains to New York City (today’s R3 West Trenton rail line). Almost immediately after the Yardley branch opened in 1876, bigger companies took a strong interest in the North Penn and in 1879 the Reading Railroad paid top dollar when it purchased the company.

Towne kept on good terms with the Merrick family. In 1860, Samuel Merrick’s son, John Vaughan Merrick, became CEO of the Merrick & Sons business. During the Civil War the U.S. Navy hired both Towne and the younger Merrick as consultants in engine design and manufacture. After the War, Vaughan Merrick, as he was known, continued a few years in business and then retired at age 42, an even earlier retirement than that of Benjamin Franklin, a century earlier. The same year he retired, Merrick was elected a Trustee of the University of Pennsylvania. He championed the cause of the Scientific School and when it was re-organized, he was no doubt instrumental in recruiting Towne’s interest in the School. Towne was elected a Trustee in 1873, at the age of 55. He lived only two years before his sudden death. There is no evidence that the Trustees knew in advance that Towne had named the Scientific School his principal beneficiary, but when his will was proved and the size of his bequest revealed, they immediately renamed the School in tribute to him. Towne’s benefaction, nearly half a million dollars, was far and away the largest gift Penn had received up to that time. It guaranteed the rise of a great school of engineering at Penn and we stand here this afternoon as the beneficiaries of his continuing generosity.

Inscription on the silver urn:

by the Directors of the

In grateful appreciation of his disinterested and

Vice-President of the Company