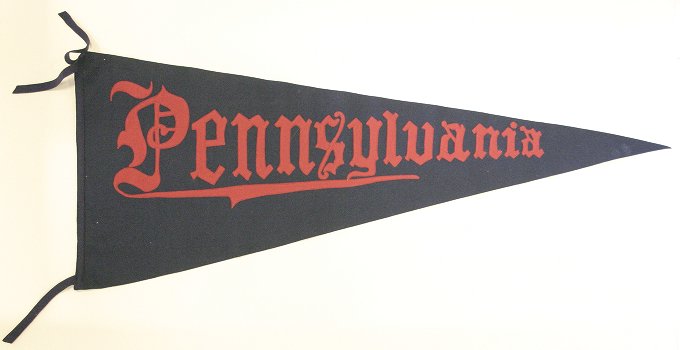 When were the Red and Blue first used as Penn's colors?

The use of one color, or a combination of colors, to represent a college or university has its origins in the growth of intercollegiate athletics in the latter half of the nineteenth century. As the popularity of college sports grew the pool of potential teams, as well as potential sports, a need arose to distinguish athletes from different schools. The first use of college colors for Penn is not known, but there is at least one contemporary reference to blue and white being worn at a baseball game in December 1875.

While there was some debate as to the exact origins of the selection of red and blue, the general consensus and record points to Henry Laussat Geyelin, A.B. 1877, as being the individual largely responsible for the selection. Geyelin was the first Penn athlete to wear the colors in July 1875 at an intercollegiate track meet in Saratoga. According to an account he gave in 1905, he chose the colors after looking at the list of colors other athletes had already taken. He said he specifically chose red and blue because “they were the colors of the Signal Service, and the cap which I wore was the one which was used in the races of the New York Yacht Club, they being the colors of the N.Y.Y.C.” When Penn’s Athletic Association deliberated over the official colors for the AAAC the following spring, the students concurred Geyelin’s selection and also liked the association with the American flag. 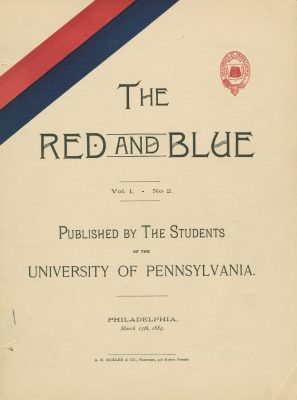 The Red and Blue, by the Students of the University of Pennsylvania, March 15, 1889

Francis James Dallett, then the University Archivist, answered this question in the Daily Pennsylvanian of 23 November 1983:

“The earliest known representation of the combined Penn colors, red and blue, is as reported: on the incised letters of the lid of the 1871 College Hall cornerstone. I am unable to trace the use of either color as having any prior use on any document or artifact which would indicate any special significance to the institution; of course, the two colors do reflect the colors of the national flag. The whole business of assigned institutional colors is a 19th century phenomenon, perhaps with roots in the Romantic Age in the commercial vein of the ‘assigned’ tartans of the Scottish clans who had no defined plaids earlier. Eighteenth century American academic institutions simply did not have colors.”

For a detailed history see: Thomas Blaine Donaldson, “The Origin of Red and Blue,” The Alumni Register of the University of Pennsylvania. 10 (1905): 13–22.

Exactly which shades of red and blue are those of the University?

Later the garment industry developed the first precise color standards and presented them as the Standard Color Card of America. When the first government standards were established for the flag in the 1930s, the specified shade of blue, “national flag blue,” was the same blue-black in common use for police uniforms. In the 1960’s the shades of the flag colors were officially designated as “Old Glory” red and “Old Glory” blue. These colors are not designated by law, but are listed in the GSA technical specifications for manufacturers.

Today the Standard Color Card of America standards have been superseded by the Pantone Matching System (PMS). According to the PMS system, the PMS number for national flag blue is 282, while the current flag colors are PMS color blue 281 and PMS color red 193.

A darker “burgundy” red and a dark blue were adopted many years ago as competition colors by Penn Athletics and these colors have long been preferred by Development and Alumni Relations. About 1986, PMS red 201 and PMS blue 288 were established as the specification for all official University printed material; these are the standards Facilities Services uses when selecting paint colors.

For information on the current University guidelines consult the Office of Communication website.