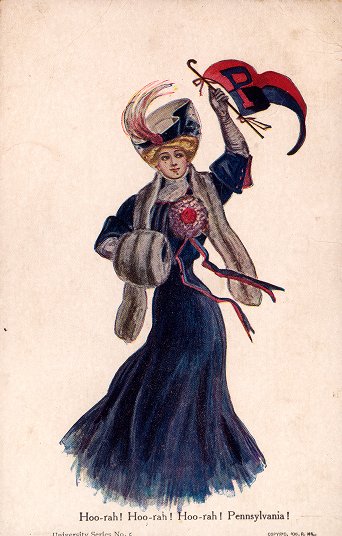 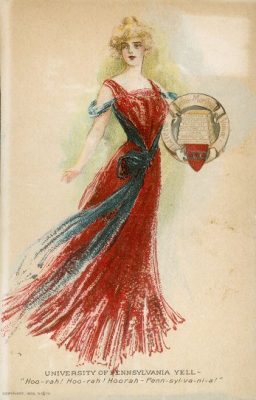 Postcard, “College Girl” standing and holding a Penn seal
Get more image details
These digital reproductions are copied from original postcards, donated by Susan Molofsky Todres to the University of Pennsylvania Archives. The postcards feature romanticized women of the University of Pennsylvania in the early 1900s. During that time, a common trend was to illustrate images of social elites in sketches, cartoons, advertisements, etc.

This design concept, created by Charles Dana Gibson, originally satirized the upper class with drawings of the “Gibson Girl” recognizable for her small waist, upswept hair and detached nature. As Gibson’s work became popular, other artists drew their figures in a similar manner, but rather than poking fun at socialites, they idealized them. These new versions featured sporty, capable women; often seen playing golf, riding bikes, lounging at the beach or cheering on their school. This latter group of students, referred to as “College Girls,” “University Girls,” “Football Girls” or “College Queens” are the focus of this exhibition.

F. Earl Christy created the “College Girl” postcard design illustrated by the four postcards shown here. Born in Philadelphia on November 13, 1883, Christy attended the Pennsylvania Academy of Fine Arts where he learned commercial artistry. Drawing on the influence of Charles Dana Gibson, the “College Girl” represented the upper class female student of the era. Each girl showed allegiance to her school, usually by wearing school colors and by waving a school pennant. National and international companies, including Christy’s own father, William B. Christy of Philadelphia, published Christy’s girls during the design’s peak years in 1906 and 1907. Other artists created unsigned, “College Girl” styled postcards during this time. 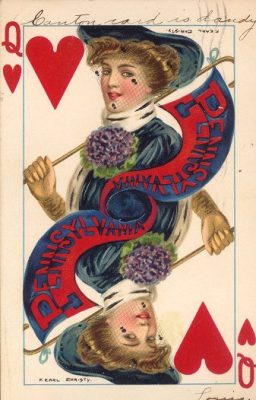 Postcard, “College Queen” series no. 2767, featuring Queen of Hearts holding a cane with blue and red Pennsylvania pennant
Get more image details
The “College Girl” postcards had many publishers. One popular publisher, shown on these two postcards, was Raphael Tuck and Sons. Headquartered in England, with a satellite office in New York, the company branched into postcards in the early 1900s. Because the company was a publisher for the Royal Family, each card bore the phrase “Art Publishers to their majesties the King and Queen,” along with the arms of the Crown of England. The company’s logo, an easel and palette, was also on the cards. Most of the Tuck records and postcard originals were destroyed when London was bombed in WWII. 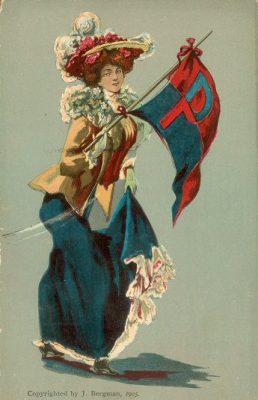 College Girl postcard, 1905
Get more image details
In 1861, John P. Charlton of Philadelphia received the first United States postcard copyright. Charlton later transferred the copyright to Philadelphian H.L. Lipman who sold the cards until 1873 when the U.S. Post Office took control over the postcard business. The 1898 Private Mailing Card Act allowed a person to send a one-cent non-governmental postcard, if the card was inscribed “Private Mailing Card.” In December 1901, the Post Office allowed the term “Postcard” to replace the term “Private Mailing Card.” Postcard users wrote correspondence on the front of the card until 1907, when the Post Office allowed correspondence on the card’s backside. This change gave rise to divided line postcards that have a vertical line dividing the address and correspondence sections.

The postcard shown above, created between 1901 and 1906, bears the phrases “This side for the Address Only” and “Post Card,” rather than the earlier phrase “Private Mailing Card.” The postcard shown below, created in 1907, allowed the sender to write correspondence to the left of the divided line on the backside of the card.