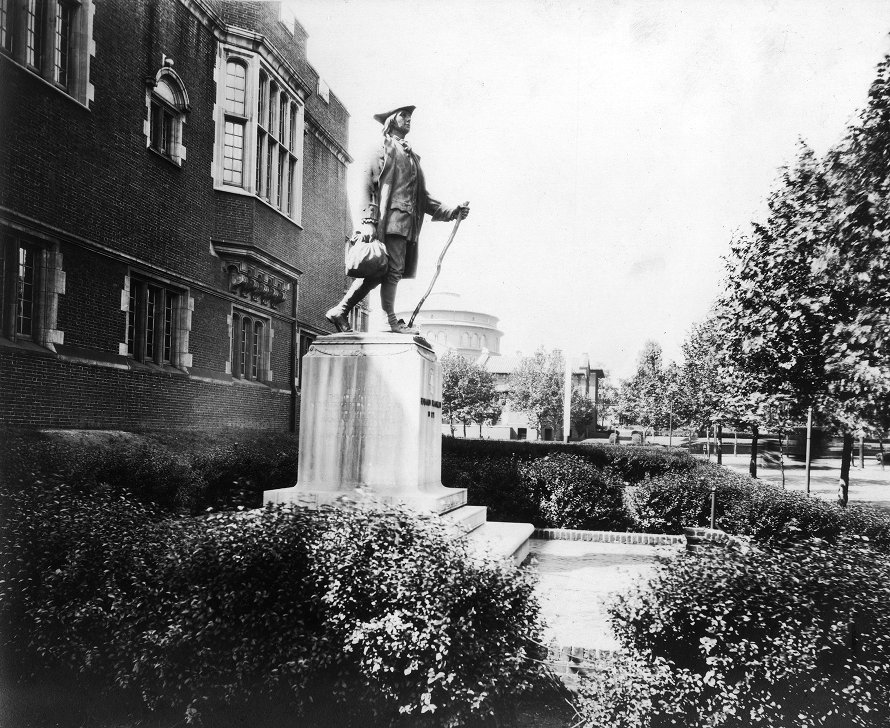 Statue of Young Benjamin Franklin by R. Tait McKenzie, statue and base, 1914
Get more image details 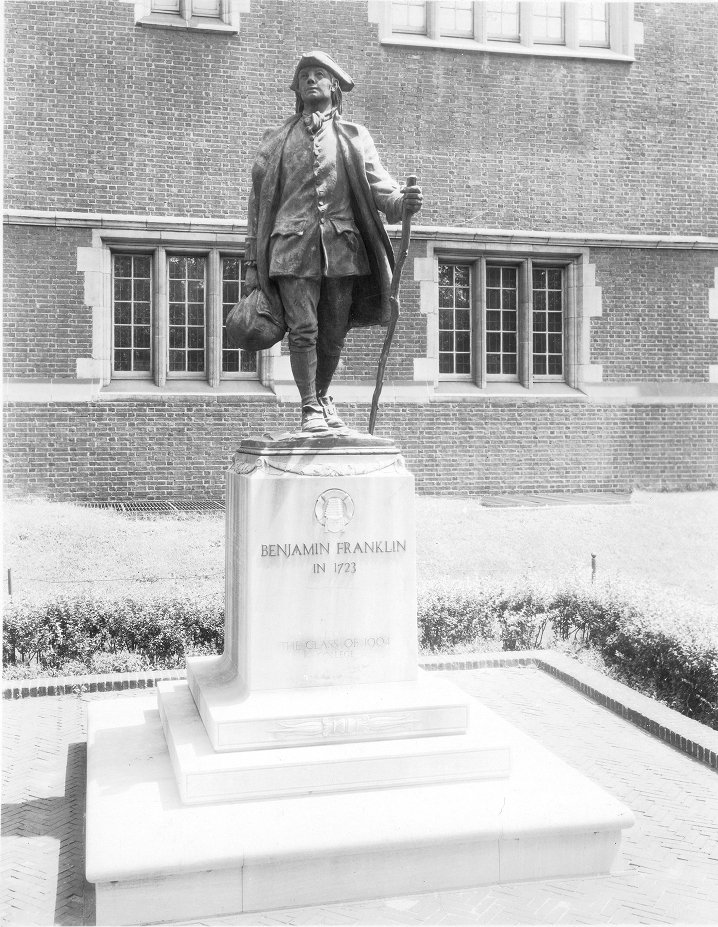 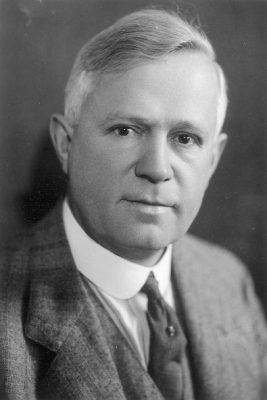 William Otto Miller, 1920
Get more image details
In 1902, two members of the Class of 1904 were discussing Penn’s history and, in the course of their discussion, realized there was nothing on campus which indicated that Penn had been founded by Benjamin Franklin. By the time of their graduation, the entire class felt that the Penn campus was in need of a memorial to Ben Franklin. It was decided that, on the occasion of their tenth reunion, the Class of 1904 would give some memorial of Franklin to its alma mater.

In the years following their graduation, the members of the class who were most involved with the fundraising and planning for the memorial were Marshall Morgan (1881-1953), Layton Register (1882-1961), and William Otto Miller (1877-1931). Miller, pictured at right, was the chairman of the class’s committee on the Franklin memorial. He would later serve as Comptroller of the University and the General Manager of the University of Pennsylvania Fund. The class eventually decided that a statue would be the best memorial to Franklin and the University offered the lawn in front of Weightman Hall on 33rd Street as a home for the statue.

The Class of 1904 chose Robert Tait McKenzie as the artist for the statue. He was selected by the class for several reasons. Aside from being a noted sculptor with an idea for the statue which appealed to the Class of 1904, McKenzie was also the head of the department of physical education at the University of Pennsylvania. As head of this department, McKenzie had charge of Weightman Hall, and it was outside this building that the statue was to be placed. Because of his close connection to the site, McKenzie would bring an energy to the project that no other sculptor could.

McKenzie and the representatives of the Class of 1904 decided that the statue of Franklin should show him as he was when he first came to Philadelphia in 1723. The image of a young man with very little personal property, no job, and certainly no fame, was chosen to inspire new Penn students. The hope was that new students would see the statue of Franklin coming to Philadelphia before he made anything of himself and see that they too could make something of themselves in Philadelphia and at Franklin’s University.

Before the construction of the statue could commence, the Class of 1904 needed to raise a majority of the $10,000 cost of the statue. To do this, a committee made up of class members solicited subscriptions from the rest of the class. Eventually the committee was successful in raising the full $10,000. 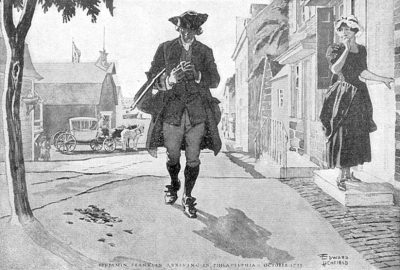 Benjamin Franklin when he first arrived in Philadelphia in 1723, watercolor
Get more image details

In order to correctly model the clothes on the statue after the clothes Franklin might have been wearing when he stepped off a boat at the Market Street Pier on October 6, 1723, McKenzie needed to do some research. He consulted John Bach McMaster, the director of the history department at the University of Pennsylvania, and Howard Pyle, a painter of colonial subjects, for any advice they might have which would help him to more accurately portray Franklin. These consultations led McKenzie to find newspaper descriptions of runaway apprentices, whom Franklin himself claimed to have looked like during his journey to Philadelphia. 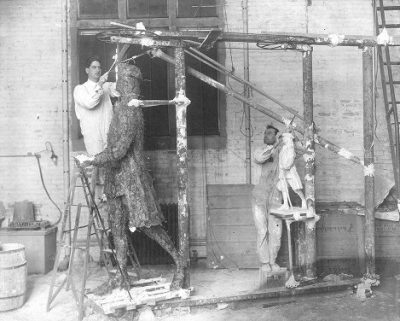 To model Franklin’s face and head, McKenzie studied the portraits and busts of Franklin produced later in Franklin’s life. McKenzie, using these works of art as a basis, composed what Franklin may have looked like before age left his face wrinkled and swollen. It took a model one week of walking around nude in McKenzie’s studio before McKenzie found a position which he felt would be suitable for the statue which would be titled, Young Franklin. As pictured at right, McKenzie first made a smaller clay mold of the statue and then using that mold made a full-scale mold which would be used to make the bronze statue itself. 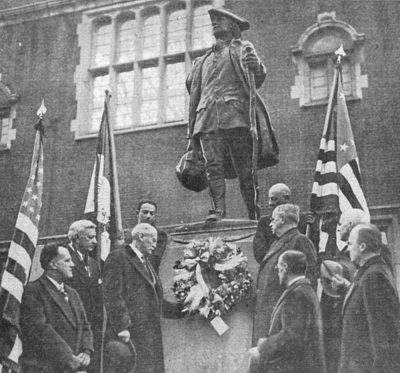 At the ground breaking for the statue and its base on June 18, 1913, Hobart Porter, the spade man of the Class of 1904, was first to break ground. Following Porter, all the members of the class who were present used the class spade to dig up some earth as well. Below is a photograph of the ground breaking ceremony, complete with a Class of 1904 banner. The ground was then prepared for the base and statue in order to be ready for the statue’s dedication one year later. A photograph of the ground in front of Weightman Hall during these preparations is below along with a photograph from the dedication ceremony. 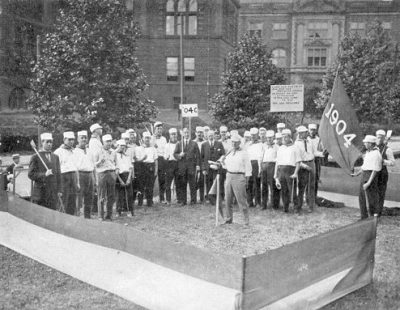 The statue’s base and its surrounding landscaping were designed by Paul P. Cret, renowned architect and professor of architecture at Penn. Cret’s blueprints are below along with a projection of the statue and its base over the ground in front of Weightman Hall. The base is marble and set above the street by several steps. On the side of the base which looks out on 33rd street are the words, “Ben Franklin in 1723,” and “From The Class of 1904 College.” On one of the adjacent sides of the base is a quotation from Franklin to his son: “I have been the more particular in this description of my journey that you may compare such unlikely beginnings with the figure I have since made there.” On the other side is a statement describing the purpose of the statue: “This memorial, dedicated at the Tenth Reunion of the Class of 1904, is a tribute to the inspiration and example of the founder of the University to many generations of sons of Pennsylvania.” 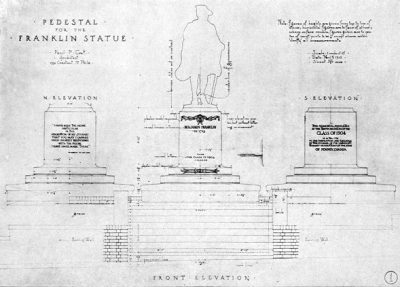 Statue of Young Benjamin Franklin, blueprint of base, 1913
Get more image details 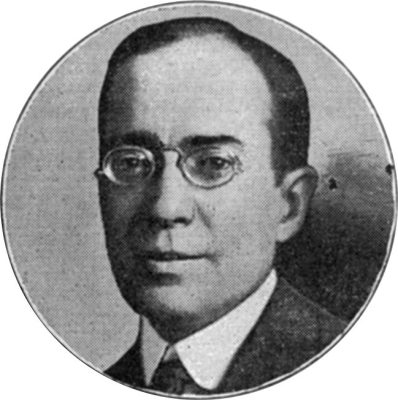 James Montgomery Beck, 1914
Get more image details
The eight foot statue was placed on its base on June 12, 1914. The statue with its base was now more than fifteen feet above street level. Four days later, on June 16, 1914, the statue was officially dedicated. At the dedication ceremony, the main speech was by James Montgomery Beck (1861-1936), pictured below. Beck was a lawyer who started his career as an assistant U.S. attorney for Eastern Pennsylvania before serving as Assistant United States Attorney General for presidents William McKinley and Theodore Roosevelt and as Solicitor General for President Warren Harding. Beck would end his political career as a member of Congress from 1927 until 1934. Beck’s long speech spared no details in specifying precisely why Ben Franklin was one of the greatest of all Americans and why his image and his University should live on forever. 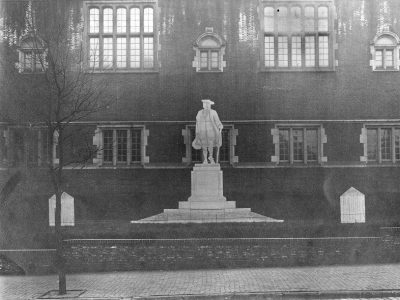 Statue of Young Benjamin Franklin, projection of statue and base on photograph of front of Weightman Hall, 1913
Get more image details

The statue and its base still stand in the exact spot they were placed in mid-June of 1914. The statue was commemorated by a plate in the University’s bicentennial Wedgwood China series produced in 1940.