Born in 1929, Joshi came to the University of Pennsylvania for graduate study, receiving a Master of Science in Electrical Engineering degree in 1958 and a Doctor of Philosophy degree in 1960. As a graduate student, Joshi was on the team led by Zellig S. Harris and Henry Hiz that created the first natural language parser in 1959. 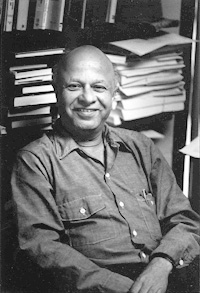 Joshi was appointed Assistant Professor of Electrical Engineering in 1961 and received a secondary appointment in the Department of Linguistics in 1964. He was promoted to the rank of Associate Professor of Electrical Engineering in 1967 and became Professor of Electrical Engineering in 1972. Some of Joshi’s research in the theory of computer linguistics during these years was based on ideas of his senior colleagues such as Harris, John W. Brainerd, and Saul Gorn. Most famously, Joshi developed much of the mathematics of certain linguistic frameworks specially focused on syntax called “tree-adjoining grammars,” continuing work that Saul Gorn and probably Zellig Harris had started at the University Computer Center in the late 1950s. Tree-adjoining grammars have proved extremely useful to the analysis of human languages and have found applications in artificial intelligence and biological computation.

By 1978, Joshi was increasingly interested in artificial intelligence and the human brain and began to work with Lila P. Gleitman of the Psychology Department on interdisciplinary research projects branching psychology, linguistics, and computer science. These projects contributed to the growth of a new academic discipline called cognitive science. In 1983, Joshi became Henry Salvatori Professor of Computer and Cognitive Sciences. In 1990, Gleitman and Joshi started an Institute for Cooperative Research in Cognitive Science, confirming Penn’s status a world center for the study of cognitive science. To this day, Joshi continues to be an active researcher in cognitive science.