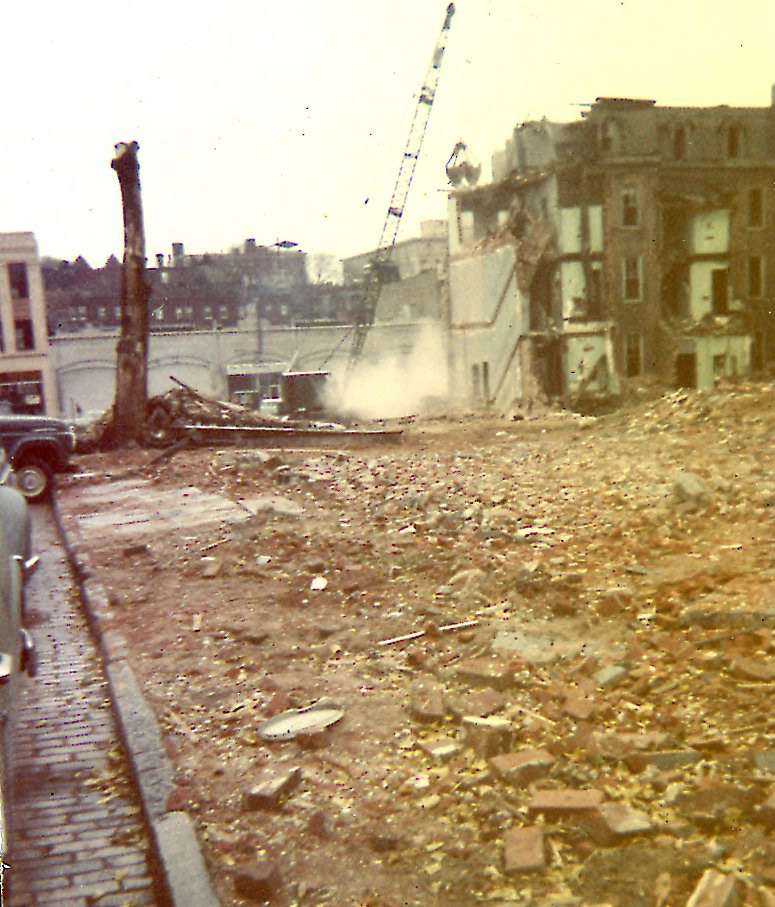 East side of 200 block of South McAlpin Street, 1960, showing land recently cleared on McAlpin Street and demolition-in-progress on the south side of 3600 Walnut Street. In the background are the buildings on the north side of Walnut Street, the three-story 3625 Walnut Street at the extreme left margin and the one-story, commercial garages at 3613-23 Walnut at center left.
Get more image details

The collection is arranged into two series, Album One and Album Two. Each series is arranged by the original page or image number.

Raymond C. Saalbach was graduated from the University of Pennsylvania in 1949 with an A.M. in English. After graduation he embarked on a long career with the University. In 1949 he became the Assistant in the Admissions Office. A few years later he was appointed as the field representative of the Admissions Office. From 1957 to 1960 he served as Vice-Dean of Admissions. In 1964 he became Director of Admissions of the Graduate Division of the Wharton School of Finance and Commerce. After a brief period as the Training and Communications Officer in the Personnel Office, Saalbach joined the Development Department in 1969. At the time of his retirement in 1981, Saalbach was the Assistant Director of Annual Giving.

In addition to a long and varied administrative career, Saalbach also received two degrees while working at the University-a M.S. in Education (1950) and a Doctor of Education (1952).

This is a photograph collection of about 200 images which document several major building activities on the University of Pennsylvania campus during the early 1960s. The first half of Album One contains informal snapshots of staff members of the Office of Student Financial Aid sometime in the mid-1960s. The remainder of the collection is images of new buildings and construction which occurred during the University’s period of greatest physical expansion. Prominent among these are photographs of the Annenberg School of Communication, Van Pelt and Dietrich Libraries, and the School of Education and Social Science Center. There are several views of the sites of the new buildings prior to the demolition of the pre-existing structures. In addition to the images of new buildings, there are several photographs of the older University buildings. All of the photographs are numbered and the images in Album Two are all dated.

The collection consists entirely of color prints varying in size from 3.5 by 3.5 inches to 6.25 by 9.25 inches. Original negatives can be found for almost every image in the collection.