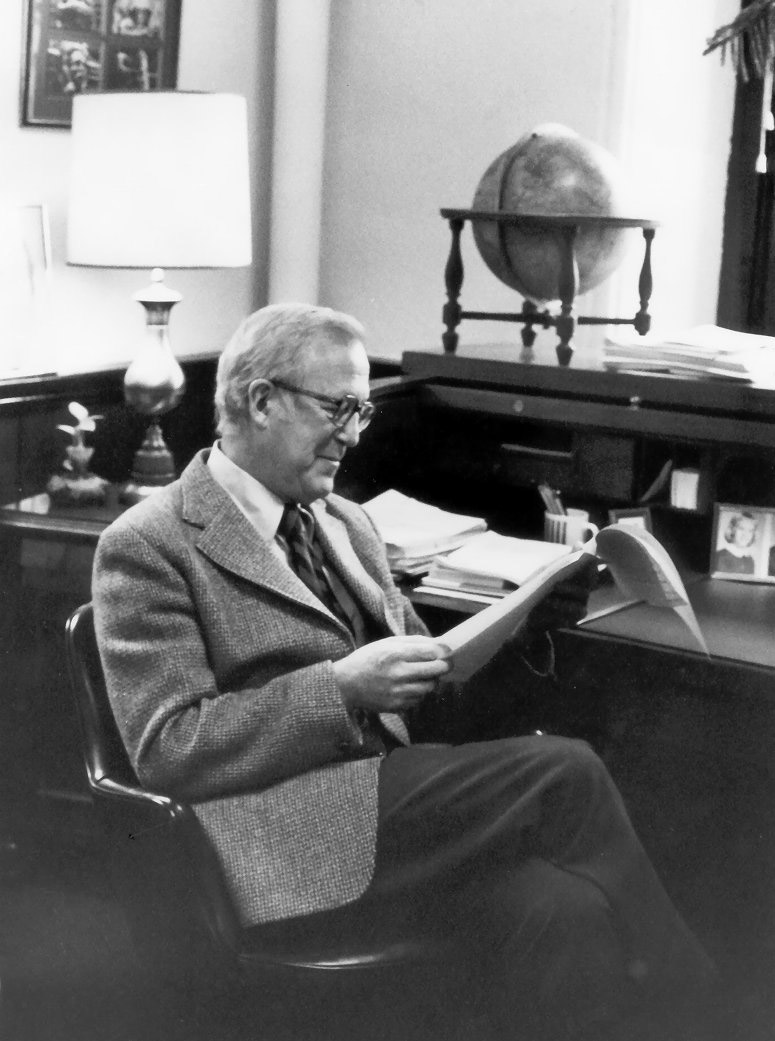 Eliot Stellar was born in Boston, Massachusetts, on November 1, 1919. He entered Harvard
University in 1937. At Harvard he began his lifelong research in physiological psychology.
It was his work with Clifford P. Morgan, his Harvard tutor, in Karl Lashley’s laboratory
that convinced him to study brain mechanism of human and animal behavior. After graduating
from Harvard in 1941, he entered Brown University and received a Master of Science
degree a year later.

Months after getting his Master’s degree, Stellar joined the National Defense Research
Council (NDRC) and conducted research into submarine crew selection. After serving
six months he left the NDRC and went into the Air Force, serving as a Classification
Psychologist from 1943 to 1944. Beginning in 1944, Stellar served as a psychologist
in the Office of Strategic Services (OSS) until February of 1946, when he returned
to the academic world.

Stellar returned to Brown to continue his graduate studies in the subject which had
interested him earlier, physiological psychology. He conducted a number of investigations
into the motivation of food hoarding, writing his dissertation on “The Effect of Altering
Metabolic Rate on the Hoarding Behavior of the White Rat.” He received his Ph.D. in
psychology in 1947.

Stellar began his academic career in the Psychology Department at Johns Hopkins University,
which was then being revitalized by its new head, Clifford T. Morgan. With Morgan,
Stellar rewrote and updated the second edition of Morgan’s textbook in physiological
psychology. That second edition, known as Morgan and Stellar’s Physiological Psychology,
was published in 1950 and was for many years the only text in the field. In 1954 he
published an essay entitled “The Physiology of Motivation” in the Psychological Review,
which pinpointed the hypothalamus as the center of motivation and suggested an integrative
neuroscientific strategy for the investigation of motivated behaviors. This essay
has recently been selected by the Review for publication in its centennial edition
as one of its eight most influential papers of the twentieth century. In 1954, Stellar
was appointed to the post of associate professor of physiological psychology. He continued
to work at Johns Hopkins until 1960 when he was offered the post of professor of physiological
psychology in the Department of Anatomy at the University of Pennsylvania.

Stellar’s career at the University was not restricted to his teaching in the anatomy
department. As head of the Institute of Neurological Sciences, his work had caught
the eye of University President Martin Meyerson. In 1971 Meyerson appointed Stellar
co-chair of the Development Commission formed to chart the strategic course of long-range
planning at the University. When the Commission’s work was completed and the previous
provost resigned, Meyerson appointed Stellar in 1973 to the post of Provost with the
task of implementing the Commission’s findings. Stellar spent the next five years
guiding the University through the Commission’s vision of “one university.” In 1978,
feeling he had accomplished all he could, Stellar resigned his post as Provost.

Stellar returned to teaching in the department of anatomy and engaged in more extensive
research in neuro-sciences. From 1979 until his death in 1993, Stellar concentrated
on the neuro-biological interactions underlying human and animal behaviors, a distinct
feature being the study of salt appetite. His closest colleague at the University
of Pennsylvania was his former student Alan Epstein. After Epstein’s sudden unexpected
death in a car accident in early 1992, Stellar took over the salt appetite project,
of which Epstein had served as the program director. In this period, he was also a
senior member of a nation-wide mental health research network project on health and
behavior, financed by the MacArthur Foundation. In addition to scientific research,
Stellar continued his involvement in University administrative functions. He served
on a number of committees, among them the Advisory Committee of the Department of
Anatomy, the Benjamin Franklin/Lafayette Seminar, the Nencki Institute for Experimental
Biology exchange program, the University Scholars Committee, and the Thouron Award
American Selection Committee. In 1990, at the age of 70, he accepted the offer of
appointment as Chair of the Department of Anatomy, which was soon thereafter renamed
the Department of Cell and Developmental Biology.

Stellar’s influence went far beyond the University campus. He served on a wide variety
of national and international committees and boards. One of his earliest positions
was president of the Eastern Psychological Association from 1965 to 1966. After his
term as University Provost, he became more actively involved in consultation work.
Some of the more prominent organizations with which he was affiliated include the
MacArthur Foundation (as a grant evaluator), the National Research Council Committee
on Man-Food Systems Interactions, the Society for Neuroscience, and the Tott’s Gap
Medical Research Laboratories. Stellar dedicated much of his time in his later years
to the American Philosophical Society, serving as its President from 1987 to 1993,
and to the Human Rights Committee of the National Academy of Sciences (NAS), serving
as its Chairman from 1983 until the end of his life. In his work for the NAS he actively
lobbied for the freedom of scientists to conduct their work throughout the world.
On many occasions he interceded in behalf of imprisoned scientists who were in danger
of losing their lives or suffering great hardships.

Stellar earned widespread acclaim for his achievements. He received numerous medals
and awards, among them the Warren Medal of the Society of Experimental Physiologists
in 1967 and the American Psychological Foundation’s Gold Medal for Lifetime Achievement
in 1993.

The Eliot Stellar Papers, 1938-1993, document the professional activities of Dr. Stellar
— his teaching, research, his administrative duties at the University of Pennsylvania,
as well as his responsibilities with other organizations outside the University. The
papers relating to his tenure as Provost of the University, 1973-1978, are generally
to be found in the records of that office.

The Biographical and Personal File, though small in size, provides an overview of
the long and fruitful academic career of Eliot Stellar. Included are his curriculum
vitae, correspondence concerning his numerous appointments, a transcript of an oral
history interview, and records of celebration activities in honor of his seventieth
birthday.

The Administration series consists primarily of records relating to the several posts
he held at the University from the 1970s until the end of his life. Among his major
responsibilities are Benjamin Franklin/Lafeyette Seminar, Institute of Neurological
Sciences, Nencki Institute for Experimental Biology, Research Foundation Board, School
of Medicine administration, Thouron Award, and the University Scholar program.

The Correspondence file contains letters relating to Dr. Stellar’s professional work
throughout his career. The subseries of Letters of Recommendations are closed under
University Archives protocols (closed for 75 years from the death of the recommendee.

The Addresses and Writings series consists of two speeches, manuscripts of a large
number of articles, parts of books Stellar wrote or contributed to, and reprints of
articles published from 1941 to 1993.

The series of Teaching Material covers his entire career from his appointment at Johns
Hopkins University to his final years at the University of Pennsylvania. It consists
principally of course syllabi and teaching notes.

Stellar’s Research files comprise three subseries, namely, grant projects, notes,
and reference material. Major research projects in which Stellar participated include
the head injury project, 1981-1986; the mental health research network project on
health and behavior funded by the MacArthur Foundation, 1983-1993; the National Institute
of Health (NIH) project on appetitive and consummatory food motivation, 1987-1992;
NIH project on eating patterns, 1988-1991; and the National Institute of Mental Health
project of research on neurohormonal mechanism of ingestive behavior, 1988-1993. The
research notes, dating back to days when he was an undergraduate at Harvard, include
original data, figures, and graphs for many of the experiments he conducted.

The largest group of material in the collection concerns the work Dr. Stellar did
for a number of professional organizations outside the University. The bulk of the
material in the Other Organizations series is related to his responsibilities with
the American Philosophical Society, the MacArthur Foundation, the National Academy
of Sciences and its Human Rights Committee, the Institute of Medicine, the Board of
Trustees of Ursinus College, and the Whitefall Foundation.

The Videotapes and Memorabilia series consists principally of video cassettes and
sound tapes, all related to a tribute made in honor of Stellar’s seventieth birthday.
The celebration activities were held twice, first in June 1990, and again in November
1991.