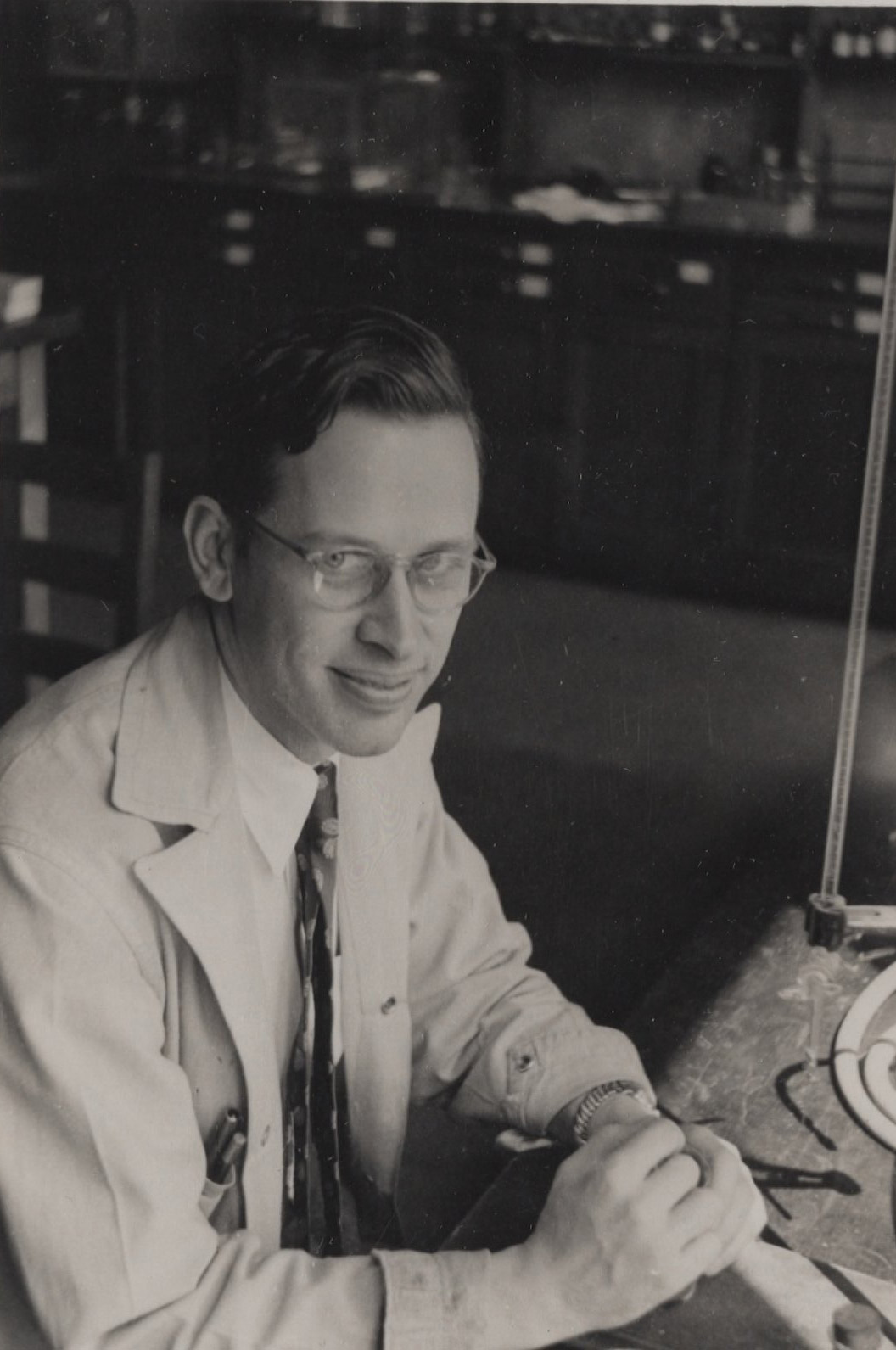 Richard Bunker Singer was born on March 22, 1914 to Edgar Arthur Singer, Jr., Professor of Philosophy at the University of Pennsylvania, and Helen Bunker Singer. The Singers lived in West Philadelphia, and spent many summers at Cape May, NJ. Richard and his older brother, Edgar A. Singer, III, were both educated at Philadelphia’s Episcopal Academy. Richard graduated in 1930 (after advancing two grade levels). In the Fall of 1930, Singer attended a semester at l’Ecole Alsacienne in Paris, France, while his father was on sabbatical in Europe. Upon his return to the United States in the winter of 1931, Richard entered the University of Pennsylvania, where over the next eight and one half years he earned three degrees: the A.B. in 1934, an A.M. in Physics in 1935, and the M.D. in 1939. He followed his graduation from Medical School by serving a two-year rotating internship at the Hospital of the University of Pennsylvania. In 1941 the National Research Council awarded Singer one of its prestigious fellowships. He used it to conduct research at Harvard University in acid-base balance in human blood. At Harvard, Singer worked under the direction of Dr. A. Baird Hastings. His research was eventually interrupted by World War II.

During World War II Singer served as a United States Navy flight surgeon in the Pacific Theater. At the end of the war he finished his service at National Naval Medical Center, Bethesda, MD, where he met his future wife Dr. Margaret Henson. Singer continued in the Naval Reserve until 1972 when he retired with the rank of captain. In 1947 he completed his National Research Council Fellowship at Harvard University, and accepted a teaching position at the University of Pennsylvania Medical School. Singer opted for a career change in 1952 when he accepted a position in life insurance medical underwriting at New England Mutual Life Insurance Company in Boston, MA. He remained with the firm until his retirement in 1979. It was at New England Mutual Life that Singer began his studies on the analysis of excess mortality follow-up studies – which he would continue after his retirement.

Singer married Margaret Henson in 1947 and they had three children – Elizabeth, Permelia, and Richard. The Singers moved to Cohasset, MA, when Singer accepted the position at New England Life. They lived there until 1979, when they retired to York, Me. Richard Bunker Singer passed away on February 19, 2010. Margaret (Henson) Singer died eleven weeks after her husband, on May 11, 2010.

The Richard Bunker Singer Papers document the family life and professional career of Dr. Singer. The collection has been organized into seven series: Correspondence, Personal, Professional, Research, Works By, Photographs, and Awards. The Correspondence Series predominantly consists of letters sent to Dr. Singer throughout his life, with copies of outgoing correspondence starting around 1980. The folder titled World War II contains letters sent by Dr. Singer to his family. The bulk of letters are from family members, and covers such topics as summer camp in New England, trips to Cape May, NJ, service during World War II, and his career as a medical researcher. Letters from his brother Edgar A. Singer III, in which both brothers address each other as Sam, detail Edgar’s service in the United States Marine Corps during World War II. Also of note are two letters from Dr. I. S. Ravdin in 1940 and 1941; and letters from his classmate John Joyce Sayen who served in the 20th General Hospital and later collaborated with him in medical research. The Personal Series documents Dr. Singers education, travels, affiliations, U.S. Navy service, and other aspects of his life not related to his career. Dr. Singer’s career as an executive with the New England Mutual Life Insurance Company, his teaching material, and items related to his medical career are documented in the Professional Series. The Research Series contains material from Dr. Singer’s various research projects through his career. Works By contains drafts and final versions of Dr. Singer’s published works. The Photographs Series contains images of Dr. Singer, as well as a number of images taken by him during his trips to Europe and Cape May. The World War II files contain images of Naval Air Station Sangley PT near the Philippines where Singer was stationed in the Pacific, and the Admiralty Islands. Most photographs appear to have been taken by Singer and show images around the base – particularly the medical department. The images from Dr. Singer’s 1937 Mediterranean trip were taken by him and focus mainly on images from the ship he sailed on and of his port visits. Among the ships identified in the pictures are two photographs of HMS Hood and HMS Barham. The Awards Series contain a number of plaques which Dr. Singer received throughout his career.

Of note for researchers interested in Cape May, NJ the collection has a number of images of the resort town from the 1930s through the 1940s. This includes scenes of the Baltimore Inn, the boardwalk (including a Mummers parade), the beach, sailing scenes, and images of the old NAS Cape May hanger. In the correspondence series there are also a number of post cards from Cape May – including ones from the World War II period. When the Singer family vacationed in Cape May they regularly stayed at the Baltimore Inn, as such the collection contains correspondence from the hotel.