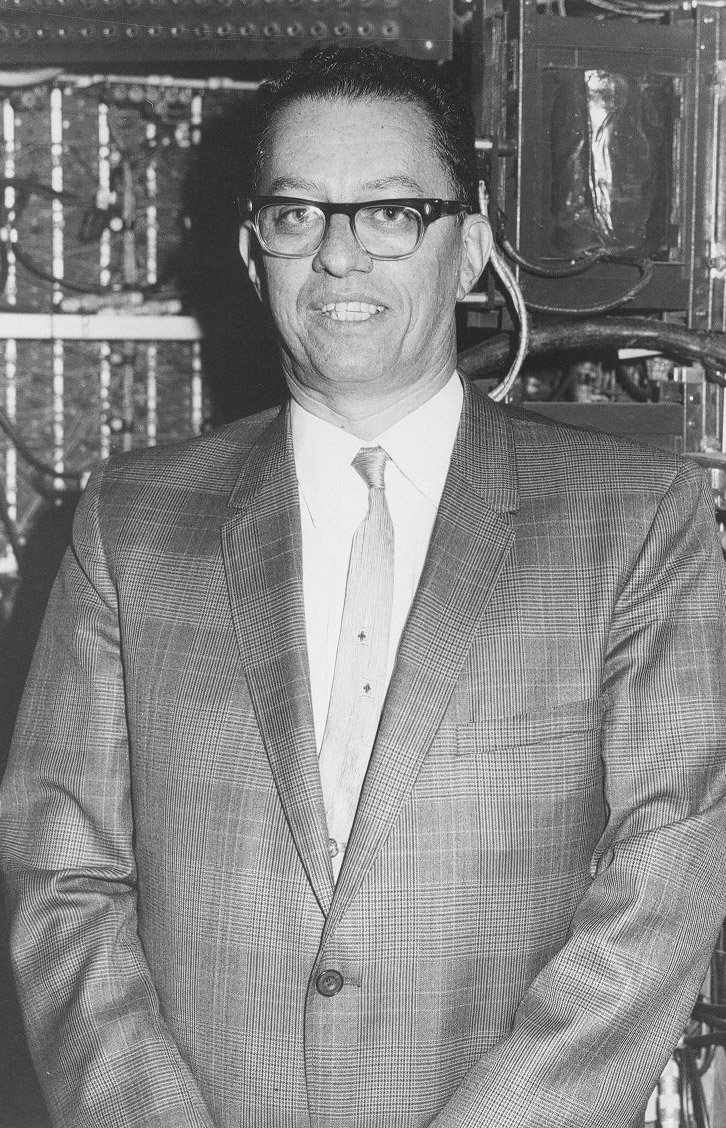 Alumni (Individuals), ENIAC
Access to collections is granted in accordance with the Protocols for the University Archives and Records Center.
Download this finding aid as a PDF

Herman Lukoff, a pioneer in the computer industry, was born in Philadelphia on May
2, 1923. His parents were Aaron and Anna (Slemovitz) Lukoff. He received his early
education in the Philadelphia public school system. At an early age he became interested
in science, and when he was eleven, he built a two-tube radio following a diagram
published in a Philadelphia newspaper. His interest in radios and electronics continued
throughout his life.

Lukoff followed his desire to work with electronics when he attended the Moore School
of Electrical Engineering of the University of Pennsylvania from 1940 to 1943. He
received the bachelor of science degree in electrical engineering in 1943. Just after
graduation from the Moore School, Lukoff was chosen to join a new project which would
shape the remainder of his career. In April of 1943 J. Presper Eckert and John W.
Mauchly had begun working on the famous ENIAC computer project. Eckert and Mauchly
were looking for a graduate with practical knowledge of radios to work with the them
on the ENIAC and that summer they chose Lukoff. Lukoff worked with Eckert and Mauchly
until June of 1944, when he was drafted into the navy. While in the navy he was assigned
to duty in the South Pacific as a radio and radar maintenance engineer.

Having completed his two-year tour in the navy, Lukoff embarked on his career in the
computer industry. He returned to Philadelphia in 1946 to work at the Moore School
with Eckert and Mauchly on the EDVAC computer. Here he helped to develop the electronic
circuitry to control the mercury delay line acoustic storage, which was a major innovation
of the EDVAC. When Eckert and Mauchly formed their own computer company in 1947, Lukoff
joined them. Here he continued to work on the company’s many projects which advanced
the computer beyond the ENIAC. Their next project was the BINAC computer, for which
Lukoff had created the electronic control for the magnetic tape handler for input
and output of data.

Lukoff’s career blossomed after 1950 when the Eckert-Mauchly Corporation was bought
out by Remington Rand (later known as Sperry Rand) Corporation. With the great resources
of this large company at their disposal, Lukoff and his co-workers started work on
the UNIVAC, the world’s first business data processing system to be produced by mass
production techniques. In addition to working on many aspects of this important project,
he continued to develop input-output devices. He created a unique logic and electronic
circuit for controlling operations of the magnetic tape system as well as circuits
that insured the reliable operation of the UNIVAC. In addition, Lukoff was also responsible
for the production engineering of two auxiliary systemsñthat of the card to tape converter
and the high speed printer.

In September of 1955, Sperry Rand was awarded the contract to develop the first multiprocessor
data processing system for the Lawrence Radiation Laboratory in Livermore, California.
This was the first big computer project to be administered by Lukoff. The Univac-LARC
(Livermore Automatic Research Computer) abandoned the radio tube for transistors and
used a processor chip to control data flow from and to the storage system, thus allowing
the machine to perform several operations at once at a high speed. In 1961, under
Lukoff’s leadership the project was able to met all the specifications of the customer
and the due date without any delays.

Lukoff’s great success in the Univac-LARC project led to his appointment as manager
of commercial engineering at Univac Engineering Center in Blue Bell, Pennsylvania
in 1962. In this new position he directed all engineering operations, which included
systems engineering, development of computer peripheral equipment, and Univac commercial
research. During this period he directed the development of the Univac III and Univac
1050 data processing systems and the Fastrand I mass storage and the Uniservo III-C
magnetic tape systems. Lukoff was also responsible for accelerating the research into
ferrite core elements and plated wire technology. As a result of this research, the
Univac division of Sperry Rand rapidly grew into one of the world’s largest manufacturing
facilities for the production of magnetic cores.

In addition to his technical and managerial work at Sperry-Rand Univac, Lukoff also
made a number contributions to the scientific world. By 1969, he had accumulated ten
patents for different computer systems. During the 1950s’ and 1960’s, Lukoff had written
over ten articles which outline the pioneering work he had done in the field. In 1969
in recognition of his major contributions to computer development, he received the
prestigious W. Wallace McDowell Award from the Computer Group of the Institute of
Electrical and Electronic Engineers. The following year Lukoff was named a fellow
of the Institute.

The last years of Lukoff’s life were spent working at Sperry Rand and working on his
book From Dits to Bits: A Personal History of the Electronic Computer. From Dits to
Bits was an autobiographical account of his experiences with the ground-breaking research
and design of computers. Having passed away just a few months before his book would
be available to the public, From Dits to Bits became a final testament to Lukoff’s
important career.

Herman Lukoff died on September 24, 1979 and was survived by his wife Shirley Rosner
Lukoff and four children, Arthur, Barry, Andrew and Carol.

Although there is a small series of personal papers, primarily containing student
notes while attending the University of Pennsylvania, the papers of Herman Lukoff
mainly document his professional career at the Sperry Rand Corporation.

The professional papers contain a variety of material covering his almost 30 years
of employment with the Univac division of Sperry Rand. The majority of the collection
contains interoffice letters and memos that Lukoff had sent to his co-workers; they
detail the development of the many computer projects in which he was engaged. There
are very few letters which he received. In addition to his office correspondence,
Lukoff’s research can be traced in the patents for projects to which he made major
contributions, and the results of this research can be seen in Lukoff’s writing. There
are copies, some in manuscript form, of his published articles, texts of his speeches,
and presentations and reports he made for prospective clients.

By far the most important part of the professional papers series are the files relating
to Lukoff’s book From Dits to Bits. In additional to the original manuscript there
are also several proofs, including one edited by Presper Eckert, one of Lukoff’s friends
and co-inventor of the ENIAC. The reference material files that Lukoff compiled to
assist him in writing the book contain letters, articles, and reports. There are also
a number of photographs related to his work on and the history of the computer.