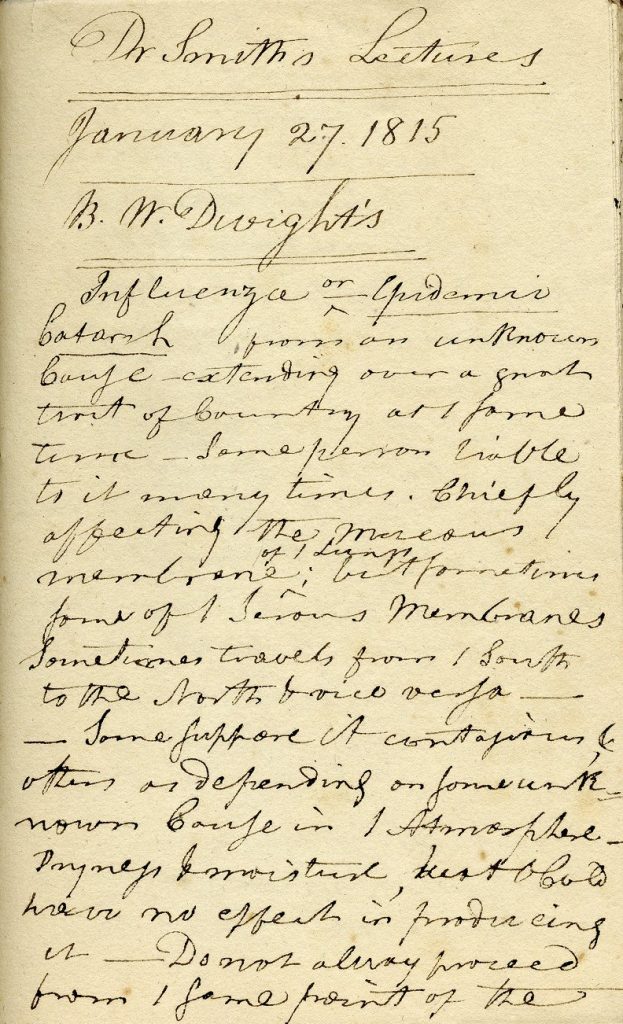 Gift of Charles W. Cole to the School of Medicine. Transferred to the University Archives, 1979. Accession No: 1979:1.

The Collection is arranged alphabetically.

Benjamin Woolsey Dwight was born on February 10, 1780 in Northampton, MA. The son of Timothy Dwight, Benjamin entered Yale College after his father was elected president of the school in 1795 and graduated in 1799 with his AB. Between 1801 and 1803 he studied medicine first at the University of Pennsylvania in Philadelphia – where he also practiced at Pennsylvania Hospital, and next at Columbia College in New York. In 1803 he started a practice in Catskill, N.Y., but was forced to abandon it two years later due to his health. Dwight next turned to business, first in crockery and later in hardware. In 1831 he moved to an eighty acre farm in Clinton, N.Y. The following year he was appointed treasurer of Hamilton College. Dwight died in Clinton on May 18, 1850.

Francis Edwin Dwight was born on December 11, 1856 in Clinton, NY, the son of Rev. Dr. Benjamin Woolsey Dwight, Jr., a Presbyterian minister, and grandson of Benjamin Woolsey, Sr. In 1882 he took medical instructions at the College of Physicians and Surgeons of Columbia University in New York, N.Y.