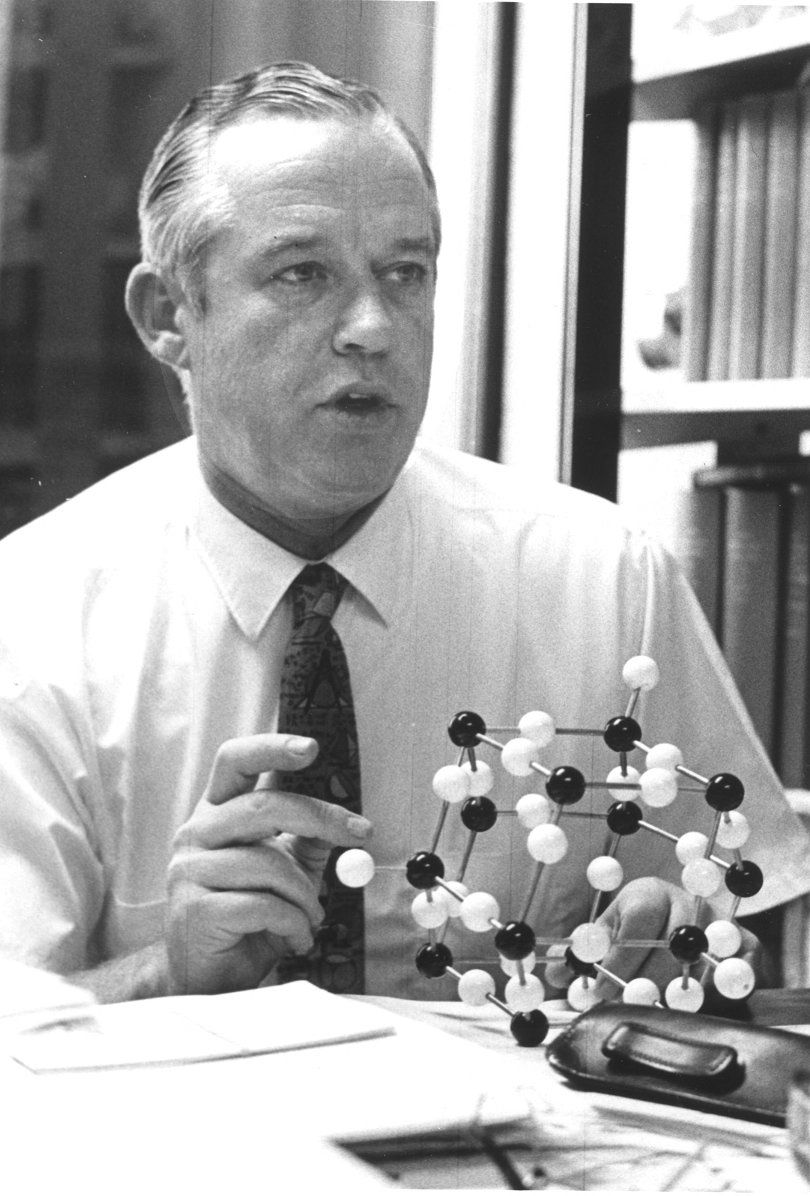 Transferred to the University Archives, March 1986.

Jerry Donohue was born on June 12, 1920 in Sheboygan, Wisconsin, the son of Jerry Donohue and Leila Marian Bishop. Jerry Donohue, Sr., was an engineer who founded his own company in 1910. Quite possibly, his career path may have sparked his son’s interest in science.

Donohue received his A.B. in 1941 and his M.A. in 1943 from Dartmouth College. He took his Ph.D. in 1947 at the California Institute of Technology under Linus Pauling. He remained at Cal Tech until 1952 as a senior research fellow on the structures of hydrogen-bonded compounds.

In 1952, Donohue was named a recipient of a Guggenheim Fellowship and was provided with the opportunity to study at Cambridge University for the year. While at Cambridge, Donohue shared an office with the Francis Crick and James D. Watson, pioneers of DNA research. Crick and Watson had been unsuccessful in their attempts to build a DNA model for the structure of DNA until Donohue informed them that the widely accepted structures for purine and pyrimidine bases was incorrect. Within a few days the Watson-Crick structure for DNA was established. Donohue continued to do important work on the structure of DNA which questioned some of Watson and Crick’s earlier work.

Returning from England in 1953, he accepted a position at the University of Southern California as Assistant Professor of Chemistry. By 1966 he had risen to the position of Chairman of the Department. In addition to his teaching, Donohue actively continued his research on hydrogen-bonded compounds and began new work on the structure of sulfur compounds. His was prolific in research and writing throughout the decades of the 50’s and 60’s.

In 1966 Donohue accepted an appointment as the Rhodes-Thompson Professor of Chemistry at the University of Pennsylvania; he remained with the University for the rest of his life. Throughout his tenure at the University his commitment to teaching and research were evident, and in 1984 he won the Lindback Award for distinguished teaching. Cancer forced him to take a leave of absence in 1985.

Donohue’s contributions to the field of Chemistry were international in scope. He specialized in crystal structures and analysis, specifically of molecules relating to biology and hydrogen bonding. His work in elemental structures lead to the publication of his book The Structures of the Elements in 1974. He was appointed a co-editor of the Journal of Crystallographic and Spectroscopic Research in 1977 and continued to have an impact on research in the field of Chemistry throughout his life. In addition to his research, Donohue was actively involved in international conferences and was briefly engaged at the Swiss Federal Institute of Technology and the University of Basil as an instructor.

Donohue died in Philadelphia on February 13, 1985. He married Patricia Schreier; they had two children, Terrence and Nora.

The papers of Jerry Donohue, with the exception of a small group of personal papers, represent the professional and academic career of a leading scientist in the field of Chemistry and the study of crystallography. The bulk of the collection begins with his arrival at the University of Pennsylvania in 1966.

Although the correspondence files, 1944-1985, contain a few personal letters, such as the earlier letters from his college friends, most of the correspondence, although often between friends, is of a professional nature. The topics range from scientific exchanges of information to Donohue’s views on the work of other people in his field to recommendations for former students. Some of Donohue’s frequent and well known correspondents include Rita Boggs, Robert S. Bernstein, John D. Dunitz, Max Dobler, Howard M. Einspahr, David Ginsburg, Edgar Heilbronner, Karl J. Hwang, John Kendrew, Linus Pauling, Richard E. Marsh, Niel Stanley Mandell, Beat Meyer, Kenneth Trueblood, James D. Watson, Arthur J. C. Wilson, Donald Voet. Most of Donohue’s correspondence can be found in this first series; however, some letters, particularly those dealing with specific research topics such as DNA, may be found with the research or writing on those topics.

The academic papers, 1961-1985, contain committee reports and minutes, 1968-1983; intramural correspondence, 1967-1984; dissertation reviews, 1978-1984; and class and lecture notes, 1955-1985. In addition, there are grant applications and reports by Donohue filed with the Laboratory for the Research of the Structure of Matter (LRSM) and the National Institute of Health (NIH).

The importance of research and writing for Donohue is well documented in this collection. Evidence of his scientific research is found in the research notes and reference material series and consists of experiment notes, data results, published articles, and some photographic images of particle studies. The bulk of the collection consists of manuscripts and articles both published and unpublished by Donohue. The articles appear in various manifestations from draft to final published product. In addition, there are research notes, reference articles, and correspondence, often with publishers, specific to the manuscript of article. Photographs (and some negatives) of tables and illustrations accompanying his essays may also be found here.

Donohue kept separate working files on his work with the American Chemical Association and as editor of the Journal of Crystallographic and Spectroscopic Research. The editorship papers contain correspondence with the other editors and publisher and reports of the status of papers submitted for publication. The remainder of the professional papers give information on Donohue’s referee reports and grant reviews, his activity with the Franklin Institute Awards Committee papers, and the professional trips.

Personal papers finish out the collection and contain financial records, birthday cards, vacation photographs, and student notes. There is one file of correspondence, 1978-1984, relating to the estate of Otto K. Schreier and Harriet Galles, the parents of Patricia Donohue.