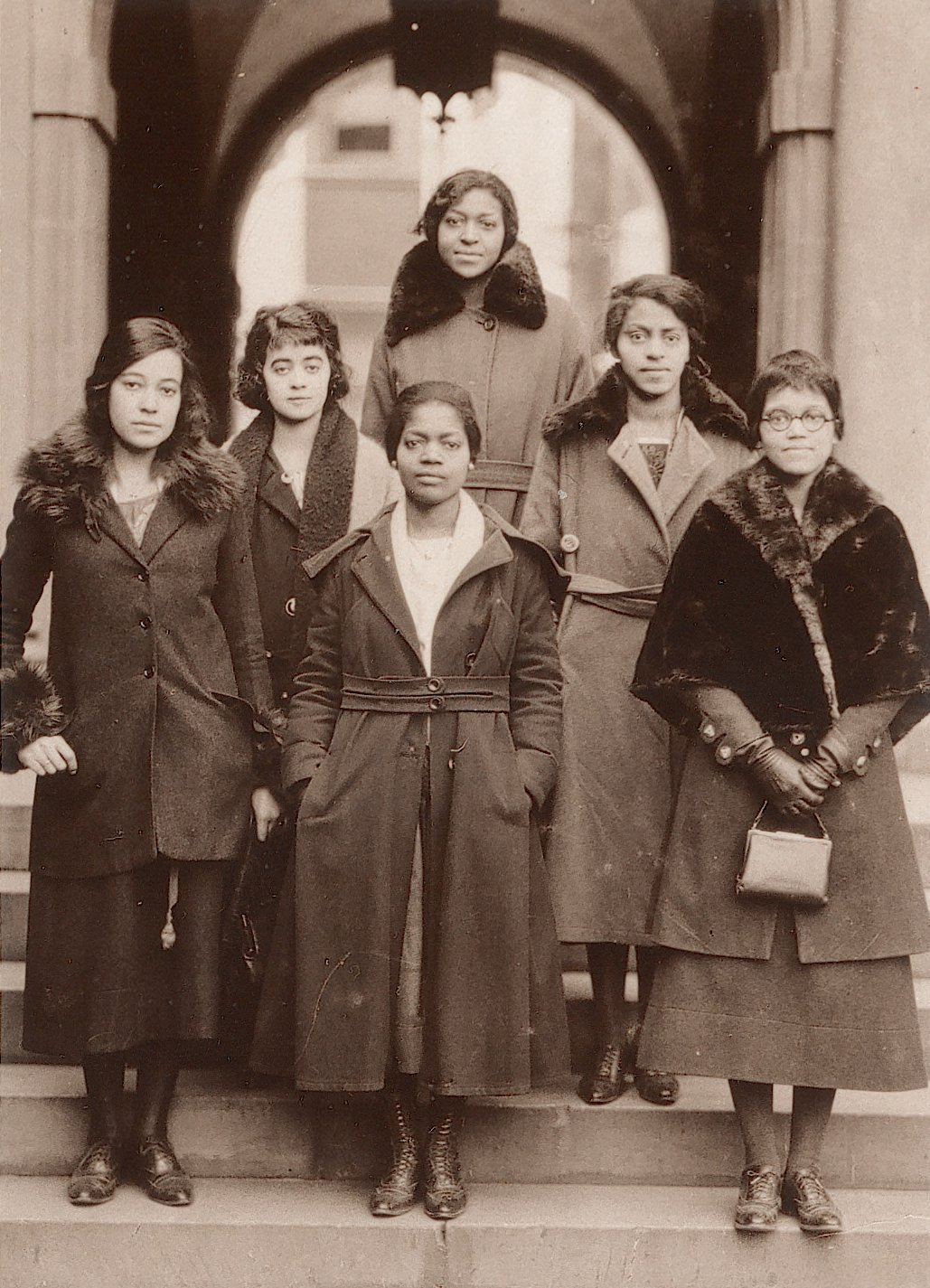 African Americans (Individuals), Alexander Family, Alumni (Individuals), Women (Individuals)
Access to collections is granted in accordance with the Protocols for the University Archives and Records Center.
Download this finding aid as a PDF

She then attended the School of Education at the University of Pennsylvania, graduating in 1918. Following her college graduation, she entered the Graduate School at Penn to study economics. In 1921, she became one of the first three Black women in the U.S. to obtain a Ph.D.

Despite her academic achievements, she had difficulty finding employment in Philadelphia and went to work for the Black-owned North Carolina Mutual Life Insurance Company in Durham, remaining there for two years. In 1923, shortly after Raymond Pace Alexander was admitted to the Bar and opened his practice, she returned to Philadelphia to be married.

The following year, in the fall of 1924, she entered the University of Pennsylvania Law School. She became the first Black woman to graduate from that institution and the first Black woman admitted to the Pennsylvania Bar in 1927. Thereupon, she joined her husband’s practice, specializing in estate and family law. She served as Secretary to the National Bar Association.

STMA I: Biographical and Autobiographical. (2 cu. ft. and oversized items.) The first two subseries include articles, resumes, and interview material which review STMA’s life and career, including her family history, practice in the law, and civic and governmental activities. Another subseries (approximately 2/3 cu. ft.) documents STMA’s international travels (1937- 1980). The last subseries (approx. 1/2 cu. ft.) consists of clippings and other scrapbook material (1923-83 with some gaps). In addition, there are a number of oversized scrapbooks (1945-46 and 1963-67).

STMA III: General Correspondence. (2 2/3 cu. ft.; 1935-82.) Primarily miscellaneous and unsorted correspondence. As in the last (general) subseries of STMA’s personal correspondence, the material is arranged in preliminary chronological order without subseries divisions. At the end of the series are several folders of condolences received by the family after RPA’s death.

STMA VI: Education. (approx. 0.5 cu. ft.; 1917-82.) Material pertaining to M Street High School and the University of Pennsylvania (general and college, graduate and law school. The bulk of the papers in the series pertain to STMA’s activities as an alumna (contributions, fundraising, activities in support of women’s and Black students’ organizations on campus, an honorary degree). A number of items relate to her academic record as a doctoral candidate and law student.

STMA VII: Law Practice and Related Professional Papers. (9 cu. ft.) The bulk of the series is made up of financial records (4 cu. ft.; 1926-82; bulk begins ca. 1936) and office diaries, appointment books, message books, and the like (5 cu. ft.; 1936-79). The series contains a number of summary records (internal memoranda, dockets, ledgers, etc.) that may be useful in gaining an overview of the history of STMA’s practice and her position in her husband’s firm.

STMA VIII: Legal Issues and Actions. (10 cu. ft.; 1928-81 with bulk appearing to fall in a normal distribution plateauing in the 1940s and 1950s.) Nearly half of the series is contained in the miscellaneous category (a few folders at most per client). Papers relating to the legal business of Mount Lawn Cemetery account for 2 cu. ft.; four estates account for another 2 cu. ft.; and legal business of various AME churches accounts for 1 1/3 cu. ft.

STMA IX: Government Service. (6 1/2 cu. ft.; 1946-82.) STMA began her career in government service in 1946, when she was named by President Truman to his Committee on Human Rights. Papers relating to her experience on the President’s Committee (primarily correspondence and memoranda) are nearly 1 cu. ft. in bulk (1946-57; bulk dates 1947). She was a member of Philadelphia’s Commission on Human Relations (CHR) from the time of its formation in 1952, having been instrumental in its inception through the Philadelphia Fellowship Commission. She served for five years as its Chairman (n.d.) and retired from the Commission in 1968. Her papers relating to the CHR should be of considerable historical interest (2 1/2 cu. ft.; 1952-72). One of the last significant chapters in the public life of STMA was her appointment by President Carter and service as the chairman of the White House Conference on Aging (approx. 1 1/2 cu. ft.; 1978-81). She was removed from her position as chair by President Reagan before the conference took place.

STMA X: Legal Organizations. (8 cu. ft.; bulk dates 1945-82.) At different periods, STMA was extremely active in two legal organizations. In the mid- 1940s, she served as secretary of the National Bar Association (NBA), the Black parallel organization to the American Bar Association, which excluded Blacks until 1952. Her papers relating to the NBA, together with RPA’s, may be among the most historically valuable subgroups in the collection (5 cu. ft.; 1930-79; bulk dates 1944-47). From 1946, she involved herself in the Philadelphia Bar Association (approx. 1 1/2 cu. ft.; 1945-82), serving on many committees, most notably the Committee on International and Foreign Law. From 1970, she assumed a position of leadership in the Philadelphia Bar Foundation (approx. 1/2 cu. ft.; 1970-82).

STMA XI: Civic Organizations. (12 1/2 cu. ft.; 1930-82; bulk dates roughly 1940s-1970s.) STMA was active in an extraordinarily large number of civic organizations. The series contains thirty individual subseries as well as a miscellaneous subseries comprising 2 cu. ft. in itself. The civic organizations in which she played significant leadership roles include the National Committee of the American Civil Liberties Union (2/3 cu. ft.; 1948- 82); the Americans for Democratic Action, National Board and National Vice President (less than 1 cu. ft.; 1948-59); the National Urban League (New York), of which she was secretary for twenty-five years (approx. 1 1/2 cu. ft.; 1930-57); and the Philadelphia Fellowship Commission, of which she was secretary (approx. 1 cu. ft.; 1946-65).

STMA XIII: Writings, Speeches, and Publications. (1 cu. ft.; [1920s]-80.) The inventory for this series includes a large number of individual writings and speeches. The majority of items included here are speeches. Many are untitled and/or undated. The series is arranged in chronological order without subseries divisions.

STMA XVI: Audio-Visual Material. (1 cu. ft.; ca. 1880-1982.) The Alexander Papers include a large number of photographic prints which have been assigned to the STMA record group primarily on the basis of subject. Many photos were found undated and unlabelled. An effort has been made to identify and date this material as specifically as possible. The subseries of photographs here is arranged in preliminary chronological order. There are many good portraits, and occasional scenes (many of them taken professionally) as well as candid and posed snapshots. The series also contains several reels of 16 mm film apparently relating to STMA’s trip to India under the Auspices of the US Committee of the International Conference of Social Work in 1952.

STMA XVII: Family and Genealogy. (2 1/2 cu. ft.; 1872-1980; initial bulk date ca. 1931.) The first subseries contains a number of articles and other writings on Tanner and Mossell family history. Five subseries are devoted to Tanner forbears and relatives; five to Mossell forebears and relatives; and three to Alexander relatives. The material includes correspondence as well as various kinds of records.