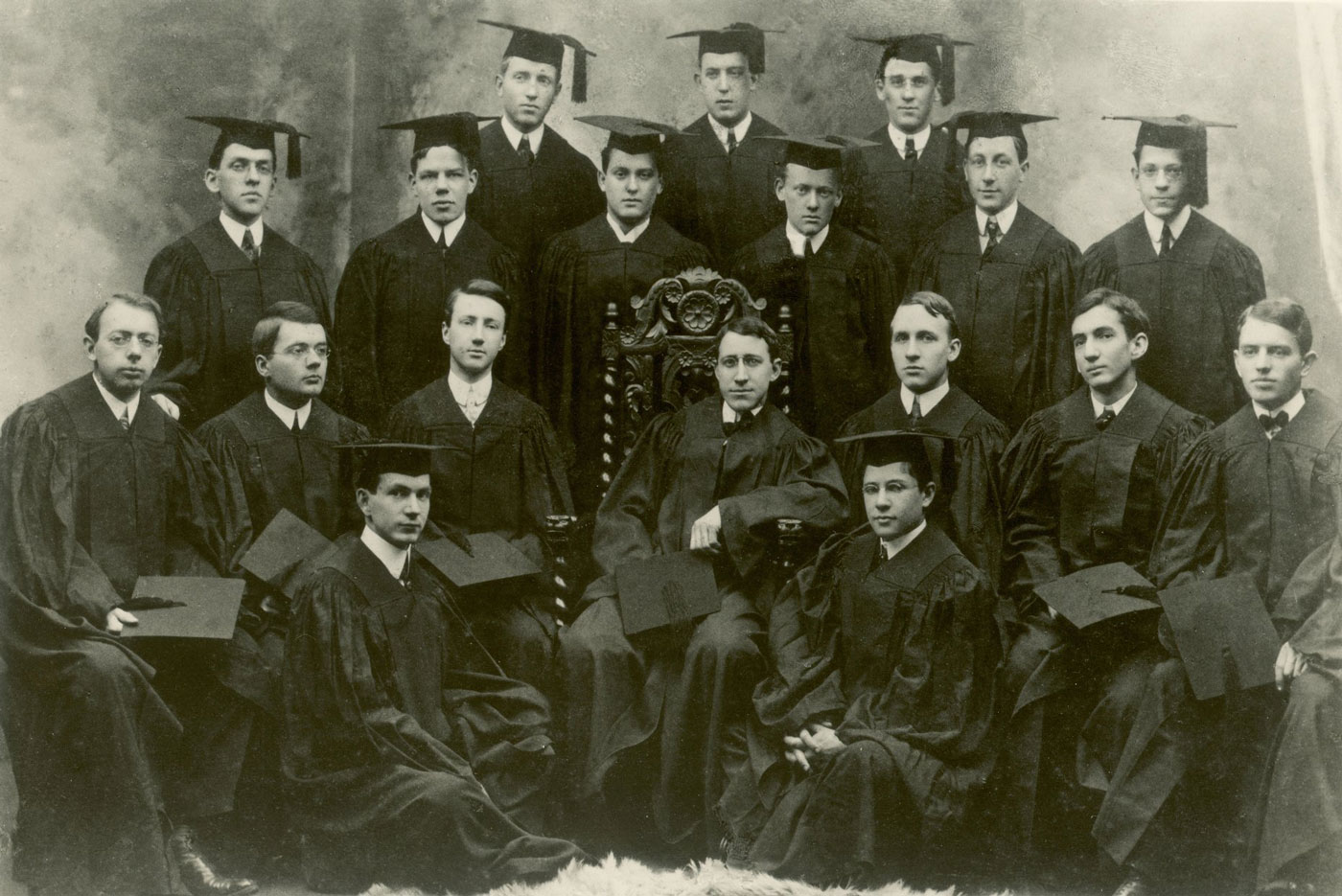 Literary Societies, Societies, Student Organizations
Access to collections is granted in accordance with the Protocols for the University Archives and Records Center.
Download this finding aid as a PDF

The collection was transferred from the University Library to the University Archives and Records Center in two parts, the majority in 1956 and one volume in 2004 (accession number 2004:15).

The Zelosophic Society was formed in October 1829 as a response to the Philomathean Society, an exclusive literary society formed on campus in 1813. “Zelosophic” can be translated roughly as “endowed with a zeal for learning or wisdom.” Commonly called “Zelo,” the society’s purpose was to discuss literature and conduct debates (much like the charge of its counterpart group). By the end of its first year, the original core of seven undergraduate members had blossomed into twenty-six and the organization was welcomed by the University faculty.

Debates against their rival the Philomathean Society, began in 1847 and drew large crowds to various Philadelphia auditoriums. On the eve of the Civil War, for example, a debate on slavery took place while pistols lay atop the lectern between the debaters. In fact, for a short time the two groups organized opposing football teams, with Zelo often emerging victorious. In 1862, a committee of Zelo members, including J.M. Power Wallace (twice treasurer, Class of 1865) succeeded in forming a union with similar literary organizations on other college campuses, including Columbia, Brown, and Lafayette. The umbrella group, called the United States Literary League was the first co-operative group of its kind in America, but it seems to have only lasted through 1866.

Zelo’s troubles would not end there. The University’s move to West Philadelphia from the Ninth and Chestnut Streets campus in 1872 would cripple the Society. According to Dr. Robert Ellis Thompson (Class of 1865, once Zelo secretary and University professor):

When I entered the University there was a Saturday session, which terminated at noon. Then the Zelo met by daylight. In 1863 or 1864 this was abolished, and the Zelo had to meet on Tuesday evenings, as the Philo[mathean Society] had pre-empted Friday evenings. This worked to the disadvantage of the Society, kept it from growing, and finally killed it, when to this disadvantage was added the necessity of coming all the way to West Philadelphia on a Tuesday evening.

West Philadelphia was then a suburb of the central residential section of the city proper and transportation was difficult in the evening in this pre-trolley, subway, and automobile era. Zelo also suffered from the competition for the student’s interest which the Franklin Scientific Society, formed in 1876. There was not enough interest and students to support two literary societies and one scientific society. Membership in Zelo steadily declined and it cease to function after the 1874-1875 academic year.

In 1893, Zelo began a campaign to promote intercollegiate debates, the first debate being held that year between Pennsylvania and Cornell University. By 1916 Zelo members formed the nucleus of an independent Debate Council to regulate all debates on campus, as well as those between the University and other schools. This organization remains a vibrant student group on campus nearly one hundred years later. A similar campaign was undertaken the following year to further the cause of intercollegiate oratory, and Zelo members subsequently founded the Pennsylvania State Inter-Collegiate Oratorical Association. In 1908 the Society branched out once again, this time into drama, an interest begun when Zelo offered to sponsor the Philadelphia performances of a touring English troupe called the Ben Greet Players. With the inspiration of these actors Zelo began to perform plays annually. In 1915, they produced “The Prince of Partha” the first English play published by an American-born playwright, Thomas Godfrey (a friend of Francis Hopkinson, Class of 1757). Two years later, and eighty-eight years after its inception, Zelo was officially incorporated by the Commonwealth of Pennsylvania.

Throughout its history the Zelosophic Society has produced two principal publications, literary magazines called The Critic and The Zelosophic Magazine. Each publication was alternately revived and became defunct throughout the history of Zelo. Notable members of Zelo included Herbert E. Ives, the inventor of the first cathode ray tube, which would eventually evolve into the modern television.

The rejuvenated Zelosophic Society existed as an independent group on campus until the mid-1940s. In early 1941 it ceased publishing The Critic and, like many student organizations, it had to suspend its activities during World War II. Though a former member, Oliver Crosby, revived Zelo in 1945, it was not able to compete with the various other student groups and eventually ceased to function sometime between 1947 and 1949.

The records of the Zelosophic Society of the University of Pennsylvania are a rich source for documenting the creative energies of university students for part of the nineteenth and twentieth centuries.

The publications of the Society, both in printed and handwritten form, cover a wide variety of topics. In the period of c.1830 to c.1870, the strongest one for this collection, one finds such literary forms as parody, humor, poetry, drama, short stories, historical sketches, and commentary on current events and culture. Though written primarily in English, there is frequent use of Latin and Greek phrases in the text, reflecting the strong classical training prevalent in nineteenth century undergraduate education. The early twentieth century writings in the collection cover much of the same forms as the nineteen century material except poetry. Additional copies of the printed publications of the Zelosophic Society can found in the general University publications collections of the University Archives.

The dramatics subject file and scrapbooks have correspondence, newspaper clippings, playbills, and programs which provide a glimpse into the strong performance art focus of the Society in the early twentieth century, particularly its major pantomime “Masque of American Drama” which was co-produced with the Philomathean Society. Some of these files also contain photographs of some of the actors and sets used in these productions.

The organizational structure of the Zelosophic Society and the manner in which it functioned are well documented in the minutes and constitution and by-laws which exist for most the history of the society (1829-1864, 1892-1941). A glimpse into the financial arrangement of the society during the 1930s can be found in its treasurer’s account books and account statements as well as the membership fine book.