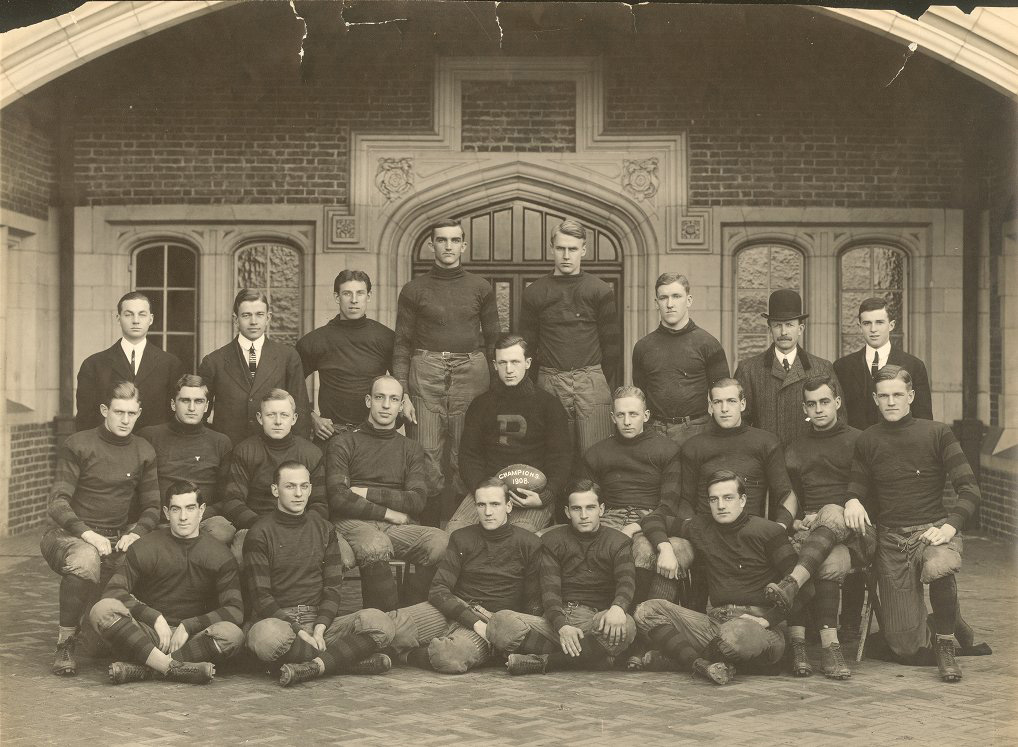 Athletics, Scrapbooks
Access to collections is granted in accordance with the Protocols for the University Archives and Records Center.
Download this finding aid as a PDF

This collection is arranged in four series: scrapbooks, honors and awards, presentation book and photographs. The first box contains the ten signatures and loose photographs from one of Hollenback’s scrapbooks, while the other two scrapbooks are housed with original binding intact in the second two boxes. The final three series are in the fourth box.

William Marshall Hollenback was born on February 22, 1886 in Blue Bell, Pennsylvania and attended Phillipsburg High School prior to matriculating to the University of Pennsylvania in 1904. While at the University of Pennsylvania, Hollenback starred on the varsity football team. He played the position of end in 1904, but a broken leg in 1905 forced Hollenback to sit out the 1905 season. Hollenback returned to earn All-American honors at the position of fullback from 1906-1908. Hollenback, who was known as “Big Bill” because of his large 6’1″, 185-pound frame, also served as captain of the undefeated 1908 team, the last Penn squad to be recognized as National Champion. Legendary athlete Jim Thorpe, whose Carlisle Indians team played Penn to a 6-6 tie in 1908, called Hollenback his “greatest and toughest opponent.”

Hollenback became president of the Bird Coal Company in 1914 and would later serve as director of the New York Shipbuilding Corporation, the Keystone Portland Cement Company and the Coal Operators Casualty Company. In addition to these directorships and owning the William M. Hollenback Coal Company, Hollenback also had a brief political career. He was elected as a Republican to the Philadelphia City Council in 1939 and served one term from 1940-1944.

Hollenback married Marion Cressman in 1917 and fathered one son.

Hollenback’s three main scrapbooks, which span the dates [1906] to 1960, are the centerpieces of this collection. Newspaper clippings about Hollenback and the University of Pennsylvania football team’s exploits from 1906-1908, including later retrospective articles, comprise the bulk of the material in the scrapbooks. Clippings about Hollenback’s coaching career and the later careers of friends and former teammates, as well as assorted photographs, are also prominent.

Photographs make up a large portion of the rest of the collection. Included among these is a combined photo album and scrapbook containing a concentration of photographs of Hollenback, teammates, friends and family and correspondence from his football playing and coaching career, 1905-1921. The photo album and scrapbook also contains some correspondence relating to reunion dinners and other newspaper clippings dating from ca. 1920 to 1954.

The remainder of the collection is composed of, among other things, Hollenback’s varsity football letters of 1906 and 1908 from the University of Pennsylvania and the title page of a book given to Hollenback by Bill Roper.