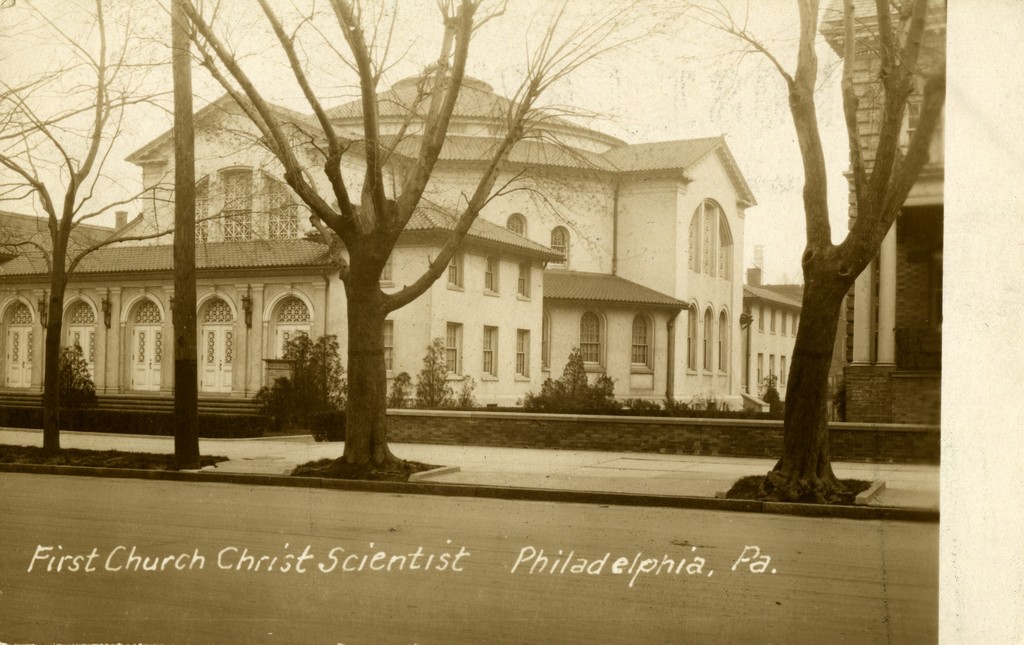 Transferred from the Division of Facilities Services to the University Archives in 1999.

The First Church of Christ, Scientist, Philadelphia can trace its beginnings back to a series of public meetings in January 1888 in rooms on Arch Street. The movement grew over the next several years with bible classes, a reading room and services. In 1892 Mary Baker Eddy advised the followers to form a church which became known as the First Church of Christ, Scientist, in Philadelphia. The church met in rented rooms at the Mercantile Library (10 S. 10th Street) until 1903 when it moved to the former Beth-Eden Baptist Church (northwest corner of Broad and Spruce Streets). In 1906 the church started a building fund and the following year entered into an agreement of sale to purchase a lot on Walnut Street west of 40th. Plans for a new building were soon drawn up by the New York architecture firm of Carrère and Hastings. The cornerstone was laid in July 1909 and the building opened for services a year later.

The building near 40th and Walnut Streets continued to be used by the congregation until 1995 when it decided to merge with the Fifth Church, located at 1915 Pine Street, and move to the Pine Street location where it remained until 2013. The 40th and Walnut Street building was purchased by the University of Pennsylvania in October 1995 and became the home of the Foundation Community Arts Initiative and the building named The Rotunda.

The collection primarily documents the building construction and alterations of the First Church, Scientist, Philadelphia’s church near 40th and Walnut Streets.