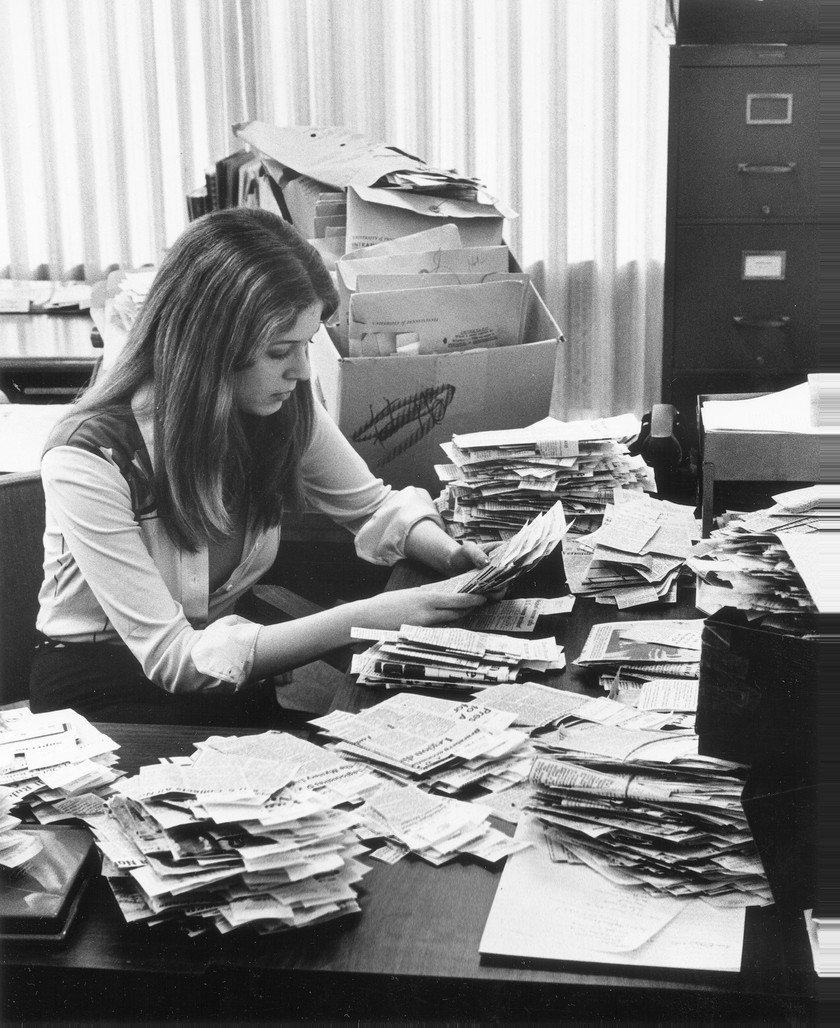 Communications, University Relations
Access to collections is granted in accordance with the Protocols for the University Archives and Records Center.
Download this finding aid as a PDF

Prior to 1985, multiple deposits of news clippings, papers, and photographs from the News Bureau were divided among three existing collections– the Information Files (UPF 8.5I), the Alumni Records Collection (UPF 1.9AR), and the photographic collection (UPX 12).

The entire collection has been organized into three series: I. Subject Files (163 cubic feet); II. Biographical Files (85.8 linear feet); III. Photographs and Audio-video Records (8.25 linear feet). All the three series have been arranged alphabetically. Each series has a unique collection call number.

In 1919 Edward Bushnell was appointed publicity agent for the University of Pennsylvania. In 1925 he was joined by Henry L. Herbert, who assumed the position of Manager of the Bureau of Publicity. Herbert served as manager until 1947 when the office underwent administrative restructuring and the Department of Public Relations absorbed the Bureau of Publicity. Herbert’s title changed to Manager of General Publicity. When the Bureau was re-named the News Bureau in 1950, Herbert was appointed as its director. He served in that capacity until his retirement in 1962.

Coinciding with Herbert’s tenure was that of Florence Bell. She started as a secretary in the Bureau of Publicity and later as Office Manager of the News Bureau. Her principal duty was creating and maintaining the history files, which served as a point of reference for the entire department. These files included draft and final news releases, internal memoranda contributing to the news releases, newspaper clippings (many of which were provided by Burrell’s Clipping Service), biographical materials, subject-specific material, and photographs.

In 1954 the Department of Public Relations expanded its work to include two new units, Motion Picture Services and the Office of Radio and Television. From 1954 to 1975, Donald T. Sheehan served as the Director of the Department of Public Relations. During his tenure, Margaret E. (Betty) Gamble assumed responsibility for the administration of the history files. In 1975 Sheehan was appointed the Secretary of the University, but his new duties incorporated administrative oversight of the department. After his retirement in 1976, Jack H. Hamilton, the new Assistant Vice-President and Director of Communications, took charge of the News Bureau, Radio-TV Office, Motion Picture Services, and Almanac. Hamilton reported to the newly appointed Secretary, John C. Hunt.

For a brief time, things continued as before. In February of 1978, however, President Martin Meyerson’s chief of staff, D. Bruce Johnstone, announced “a unique opportunity to integrate the University’s communications services into a single comprehensive unit.” Units under Hamilton’s charge were combined with those of the Department of Publications Office and renamed the Department of Communications Services. Curtis L. Barnes, Jr., Director of Publications since 1973, was named Director of the merged department. Barnes, charged with streamlining the operation in keeping with the cost-conscious demands of the central administration of the University, conducted broad administrative changes. Within two years Barnes phased out the Motion Picture Service and the Radio-TV Office.

Among the changes initiated by Barnes was the appointment of Edward J. McFall as the director of the News Bureau in 1979. Under McFall’s leadership, the department developed the “News Digest,” a monthly review of the University in the news. The role of the “News Digest” gradually eclipsed that of the reference files. Maintenance of the reference files continued for a while, but space problems, which were magnified by frequent office relocations, and the advancing state of technology, ultimately led to an ebbing of contributions to these files.

The collection documents all aspects of the University of Pennsylvania for over half a century from the 1910s to late 1990s.

The Subject Files comprise some 4,500 folders on about two thousand subjects. The series consists of material of three types: administrative papers including correspondence, miscellaneous documents, forms, notes, and photographs; News Releases produced by the News Bureau on subjects involving public interest; and clippings gathered from all major national newspapers and other publications concerning the University.

This series provides a panorama of the life on campus during the period. Within its comprehensive scope are files concerning the University’s major administrative functions such as faculty appointments; student admission, enrollment, and financial aid; operations of all schools, centers, departments, including various academic support offices and teaching and research-related hospitals; academic programs and conferences sponsored by the University; financial reports of the University; human resources development and equal opportunity employment; and the activities of the University Trustees.

Another important part of this series are files recording such major activities on campus as commencement exercises (1925-1986), dedication of new or renovated University buildings, various athletic programs, social functions of dozens of fraternities and sororities, publishing work of numerous University magazines and journals including the Daily Pennsylvania (1932-1985), women and minority activities, and miscellaneous events such as student riots, demonstrations and protests, union strikes, war-time Army-Navy training program, special projects as ENIAC, the University City project, and University-sponsored Industrial Research and Chemical/Biological Warfare Research. In addition, there are large files recording such routine but vital aspects of University life as student residences, scholarships and fellowships, etc.

An important aspect of the University administration is its relationship with outside organizations and its alumni scattered all over the country. External organizations associated with the University include hundreds of national, international and local institutions, as well as relevant Pennsylvania State and Federal agencies. Files of alumni record alumni reunions (from Class of 1862 to Class of 1986) and activities held by University alumni in all major cities and states for fund-raising or other purposes.

The Biographical Files comprise over 5,000 folders on about 3,500 individuals. The material in this series is mainly of four types: personal resumes and other biographical and bibliographical data; news releases and newspaper clippings focusing on individuals; portraits; and correspondence.

The Photographs and Audio-visual series comprises hundreds of photographs, 50 videotapes, and 6 sound tapes. Campus scenes and University architecture predominate this series. The latter includes buildings, libraries, museum, arboretum, sculptures and statues. The videotapes feature TV channel interviews with faculty members, Penn football 1984, the Hospital of the University of Pennsylvania (HUP), animal treatments at the Veterinary School and other University highlights for promotional purposes.