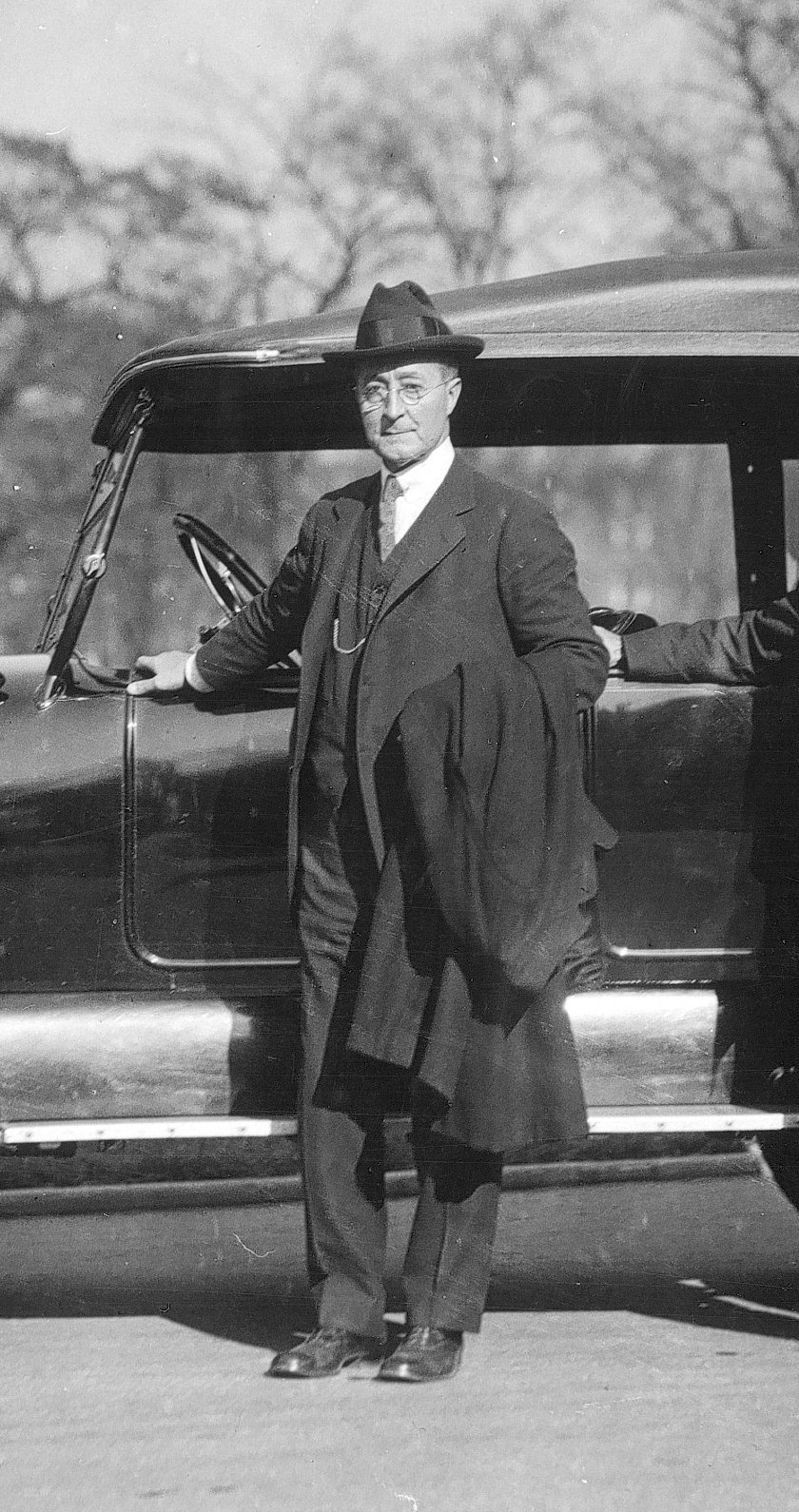 The Josiah H. Penniman papers were transferred to the University Archives in 1968. Originally, the collection included both administrative files and Penniman’s personal and family papers. The latter part has been set apart and re-classified under UPT 50 P 414.

Historically, before the final establishment of the institution of the Office of the University President in 1930, the Provost used to be the head of the University of Pennsylvania responsible for both academic and administrative activities of the School. Quick growth of the University and great expansion of the scope of its multifarious activities gave rise to the need for some fundamental changes in the mechanism of the school leadership. In the decade from early 1920s to early 1930s, the University went through a zigzag course in exploring for an appropriate way to reorganize its leadership system. The twists and turns in the course underlined a struggle between the forces in favor of the changes and the resilience of the existing order.

The uncertainty over the relationship between the two leading University offices apparently pleased neither the President-to-be nor Josiah H. Penniman who had been Acting Provost since the retirement of Edgar Fah Smith in 1920. From his nomination in the spring of 1921 to late 1922, General Wood extended his leave of absence again and again. In December 1922, Wood formally tendered his resignation “in view of the impossibility” of giving a definite date for his return.

In its report to the Trustees in January 1923, the Special Committee of Five expanded the responsibility of the Office of the University President by re-defining the University President as “Head of the University.” The Trustees adopted the report and appointed a committee of four to approach the incumbent Provost for his endorsement of the change. Although, in January 1923, Provost Penniman nominally accepted, “after prolonged discussion [with a Committee of Four] and much consideration,” the new arrangement as well as his election as Provost “in accordance with the report of the Special Committee of Five,” he later asserted his position to the Trustees more than once that “the educational head of the University ought not to be subordinate to any other official.” To keep his service, the Trustees, instead of finding a new person to fill the office of President, selected in July Penniman President of the University of Pennsylvania, who was in the meantime requested to “act as Provost until a new Provost shall have been chosen.” As Penniman was now President and Provost concurrently, the Trustees raised his annual salary from $15,000 to $25,000 in November 1923.

The movement of relapse finished a full cycle by late 1926. On November 15, the Trustees approved “in principle” the consolidation of the offices of the President and Provost under the title of Provost. In December, the Trustees formally abrogated the title of University President and restored the Provost as head of the University. To assist the Provost, the Trustees decided to create the positions of three or more Vice Provosts to share the responsibilities in such fields of activities as faculty matters, student matters and the relations with the public.

The new executive and administrative system of the University, which took a whole decade to shape and emerge out of drastic twists and turns, has been in existence since then. It has functioned without much change in the past half century and more.

Beginning in the late 1920s, positions of Vice Provosts were gradually created as various needs arose. In 1928, the Trustees established three Vice Provost positions. One was to supervise the Undergraduate Schools and the Graduate School of Arts and Sciences; the second to be in charge of the Medical Schools, Institutes and Departments; the third to exercise supervision over the administrative business of the University as well as over departments not attached to any one school or group of schools. All three Vice Provosts were responsible to the Provost and to the Trustees. One of them (in the order designated by the Trustees) would act as Provost during the absence or inability of the Provost or during a vacancy in the Office of Provost. The Vice Provost in charge of the Undergraduate Schools would also serve as Chairman of a Committee on Student Welfare.

In January 1954, at the recommendation of President Gaylord P. Harnwell, the Trustees appointed two more Vice Provosts to strengthen the Office of the Provost. One was to be responsible for research funds and awards, research publicity and relationships with learned societies; the other for budget matters, teachings loads and records, Summer School, Undergraduate calendar, etc. In 1973, a new position of Vice Provost for Graduate Studies and Research was created. A committee was formed to search for the position. In the same year, another committee was constituted to search for a Vice Provost for University Life. The two latter offices were alternatively named in later years as Vice Provost for Research and Vice Provost for Undergraduate Studies and University Life respectively.

The Office of the Provost was most recently reorganized in the summer of 1999 by Provost Robert L. Barchi. Under his direction the principal functions of the Office are managed by an Associate Provost, a Deputy Provost, and four Vice Provosts. The Vice Provosts include one for the University Libraries, one for Information Systems and Computing, one for Research, and one for University Life.

The Deputy Provost is the Provost’s chief advisor. He works closely with the Provost and is responsible for both undergraduate and graduate education. He chairs the Council of Undergraduate Deans, the Council of Graduate Deans, and the Graduate Faculties. In addition, a number of academic and cultural units on campus report to him. They include the Annenberg Center for Performing Arts, the Institute for Contemporary Art (ICA), the Arthur Ross Gallery, the University Museum, the University Press, and the Office of International Programs.

The Vice Provost and Director of Libraries. He is responsible, under the Provost’s direction, for planning, acquiring, managing and preserving the knowledge and informational resources that support Penn’s instructional and research programs. The Vice Provost and Director of Libraries has responsibility for fourteen centrally administered libraries on campus (excluding Law), the Center for Judaic Studies Library in center-city Philadelphia, and the rapidly growing “sixteenth” library — Penn’s digital Library on the World Wide Web. The Vice Provost also represents Penn’s interest in national and regional library consortia, such as the Research Libraries Group, the Coalition for Networked Information and the Association of Research Libraries, that enhance scholarly access to information, and advocate libraries in public and government arenas. The Vice Provost advises the Provost on all matters pertaining to academic information resources.

The Vice Provost for University Life (VPUL) has administrative responsibility for offices and programs which support Penn’s 22,000 undergraduate, graduate, and professional students and the faculty and staff who nurture their interests and aspirations. The following are areas for which the Vice Provost for University Life has oversight in partnership with students, faculty, and the twelve schools of the University: co-curricular academic programs; student affairs, organizations, and student union facilities; campus resource, student health, and student support services; and University Life Information and Technology Services.

The Director of College Houses and Academic Services (CHAS) is responsible for supporting the staff, programming, and academic mission of Penn’s twelve College Houses. The Director is the chair of the Residential Faculty Council (RFC), comprising the Faculty Masters of the twelve houses. The Penn Video Network is also part of CHAS.

The Dean of Undergraduate Admissions oversees the recruitment, selection, and enrollment of students for the four undergraduate schools at Penn. He sits on university wide committees and serves as a Trustee member of The College Board.

The Director of the Division of Recreation and Intercollegiate Athletics also serves as Assistant to the Provost. Penn Athletics supports 32 intercollegiate athletic programs with more than 1,100 student-athlete participants. The Athletic Director also oversees Penn’s numerous recreational, intramural and community programs. This is an important service to the University community and a significant priority for Penn athletics and the recreation department.

The Executive Assistant to the Provost provides extensive administrative assistance to the Provost, ensuring the implementation of his academic priorities. The Executive Assistant coordinates the activities of the Provost and his associates both within the Office as well as with other administrative offices in the University. She also prepares or manages the preparation of the Provost’s correspondence, position papers, agendas and reports; performs research activities including data-gathering, analysis and interpretation; and staffs various committees. In recent years, the Executive Assistant has also assisted the Provost on office and classroom space issues. The Executive Director of External Affairs assists the Provost with his communications to external constituencies including alumni, trustees, donors, public officials, community leaders and the media. She also takes an active role in the development of communications strategies for other administrative and resource centers reporting to the Provost. In addition, the Executive Director of External Affairs supports the Provost in his numerous interactions with student groups and student leaders. She has led several major communications efforts while at Penn, including a comprehensive assessment of undergraduate communications and the initial marketing efforts for Penn’s College House system.

The Assistant Vice Provost for Graduate Education in the Office of the Deputy Provost assists the Deputy Provost and works on student outreach and fellowships, coordinates the Exchange Scholars program, and advises students, faculty and staff with questions about University policy.

The bulk of the collection is in general correspondence. Among the major correspondents were former Provosts Charles Custis Harrison and Edgar Fah Smith, Vice Provosts George A. Brakeley and J. Hartley Merrick, Treasurer F. Corlies Morgan, Secretary of the University Edward W. Mumford, Comptroller William E. Mikell, Dean of School of Education J. H. Minnick, Dean of Medical School William Pepper, heads of various academic departments, and Director of Placement Service C. E. Clewell. The subject of the correspondence covers a wide range from academic and financial matters to the planning of the development of the University.

Other important files of the collection are Addresses and Articles, reports and correspondence to the University Trustees, and Weekly Calendar. Addresses and articles include commencement addresses, opening addresses of each academic year, and addresses Penniman made on various occasions to mark major events on campus. The Weekly Calendar continues from 1911 to 1938 and carries Penniman’s notes on his schedule.

The collection also includes a small collection of books and other publications kept by the Provost Office for reference.