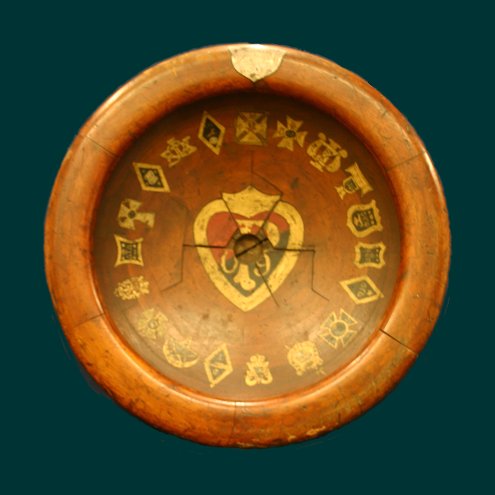 Bowl, Class of 1909
Get more image details
Access to collections is granted in accordance with the Protocols for the University Archives and Records Center.
Download this finding aid as a PDF

Since that time, the University Archives continued adding to the Memorabilia collection through donations by alumni, students, faculty and staff, as well as by purchase. Beginning in 2002, a concentrated acquisition effort by alumna Susan Molofsky Todres (CW’75, WG’77), in close collaboration with Director of Archives Mark Frazier Lloyd, has resulted in hundreds of additions to the collections.

The Memorabilia Collection is organized into twenty-one series, which are arranged alphabetically.

In addition to thousands of written and printed documents, photographs and other visual images, the University Archives also houses a burgeoning memorabilia collection. Numbering over 1,500 items, memorabilia enhance and complete millions of words of historical text with their unique, three-dimensional quality.

Memorabilia, sometimes known as ephemera, lend color and texture to well-documented history. Concepts, lifestyles, and personalities relating to Penn’s history become more accessible with a first-hand look at the rich patina of ceremonial silver, the vivid red and blue enamel of a waving pennant pin, the craftsmanship of an intricately carved cane, or the soft leather cover of a Class Day program with its red and blue silk cord. Equally important, however, is the role that memorabilia can serve in providing an historical record where there is no other known existing documentation.

Intercollegiate sports are celebrated across a vast array of ephemera. For example, a series of pennant-waving “hoo-rah” girl postcards and lithographs portrayed Victorian-dressed women cheerleaders in the 1905-1907 era. Tobacco companies popularly issued premiums in the form of school-imprinted leathers, silks, and rugs from 1890-1910, coinciding with the advent of Ivy League football. The premiums mark a time of keen school spirit, as well as the frequent purchasing of the cigarette packages that included them.

Pennsylvania tradition is reflected in the many pieces of ephemera which have been collected. There are endless variations and designs of red and blue, countless typefaces spelling out “Pennsylvania” or in earlier times, “U of P” or “Penna.” The recurring presence of the University seal, either in its current form, or the design which existed prior to 1933, is also an enduring Pennsylvania symbol. Though a Quaker is commonly thought of as the Pennsylvania mascot, there have been very few representations found bearing such an image.

The memorabilia collection spans items dating from the late 1700’s to the twenty-first century. The items in this collection are related to University of Pennsylvania founders and stewards, as well as to Penn history, traditions, organizations, schools and centers, athletics, and intellectual pursuits. Included are souvenirs, invitations, programs and broadsides, prints and paintings, trophies and medals, stamps and seals, banners, pennants and flags, calendars, postcards and matriculation cards, clothing and jewelry, scientific and medical instruments, sports apparel and equipment, architectural relics, furniture and household objects, ceramics and silver, and items purely whimsical.

Items with images available in the online Digital Image Collection are noted with the items respective URAC number in brackets at the end of the description.